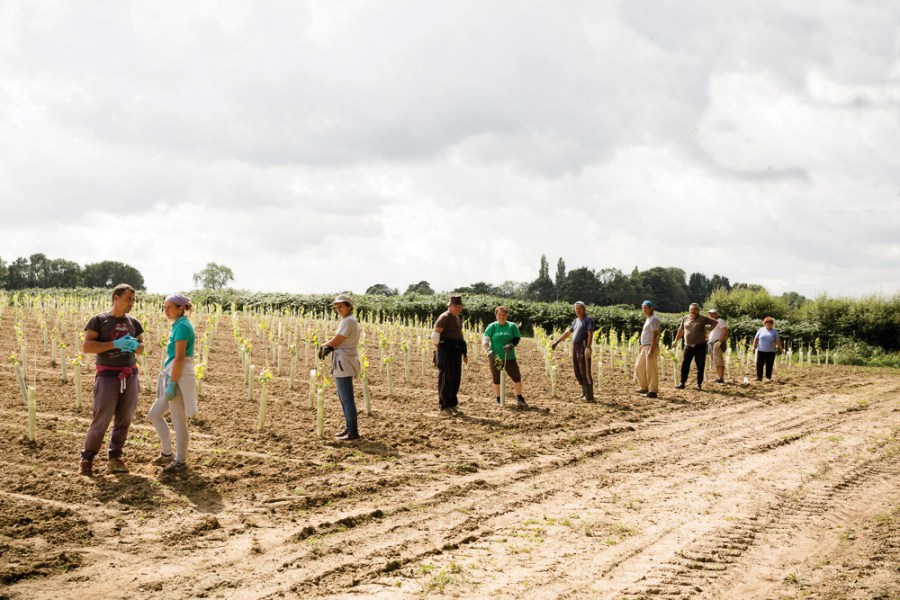 The pruning season is upon us and, after harvest, this is the second busiest and most costly intervention in the vineyard.

In most UK vineyards pruning is performed manually and therefore requires extensive amounts of skilled labour. You may be wondering where the difficulty lies here. Well, during what many feel to be a worrying period of uncertainty, significant numbers of EU workers are concerned about their future working status and have lost faith, no longer wishing to work in the UK. Many of our workers, Ionut and Alexandru included, are choosing to take their secateurs to vineyards in Germany where the lure of Bratwurst and Becks Lager calls, afforded by the extra euros earned with no GBP exchange rate.

As an industry we were complacent in earlier years thinking that there would be an indefinite supply of Ionuts, and that we could easily employ 10 hardworking Alexandrus with a simple phone call. The problem now is that we’ve lost touch. Employees have become numbers on a spreadsheet. There were no personal conversations and, as a result, it is easy for Ionuts and Alexandrus to sever their ties. We need to get back to basics and reintroduce good old-fashioned work practices by taking the time to get to know your employees. Talk to them on a regular basis, even if only over social media, and be more informative. Ask about their welfare, and make sure they feel part of the company as they are a vital cog in the wheel of agriculture. Employers need to work harder to overcome language barriers – even if it’s a translation app on a smart phone. Better still, offer them free English lessons and/or take the time to learn some Romanian phrases yourself. Praise them for the invaluable contribution they make to your business.

Since the Brexit vote 77% of labour providers have had to invest more money and resources into sourcing workers thereby increasing the cost of labour supply. ALP Chief Executive, David Camp said, “These results confirm that the warnings issued in the April 2017 Environmental Food and Rural Affairs Committee Report ‘Feeding the nation: labour constraints’ has come to pass in that ‘the current problem is in danger of becoming a crisis if urgent measures are not taken to fill the gaps in labour supply’. No urgent measures have been taken, the crisis has arrived and what’s more, all the indicators are that 2018 will be worse.”

Labour providers must also recruit responsibly. Best practice and GLAA guidelines dictate that private employment agencies shall not charge directly or indirectly for any fees or cost to workers. By labour providers adopting the “employer pays principal” it will help drive out recruitment fees to workers, their families and communities. Workers are often trapped in a permanent state of forced labour where levels of debt are unrepayable. Agriculture in the UK fits the profile as an at-risk sector vulnerable to modern slavery. Businesses are being asked to address this together with the GLAA and their three-year plan to pursue those who exploit others for work, financially, physically and/or through coercion and control, to prevent workers from being exploited and to support compliant business.

In short when you look across your vineyard and see teams of labourers carefully cane or spur pruning your vines, consider this; if Ionut and Alexandru are still there, you know their employer thinks highly of them. That they are using best practice, are compliant, and continually ensuring that all staff are working and living in a safe, happy and ethical environment, and that is good news for everyone.