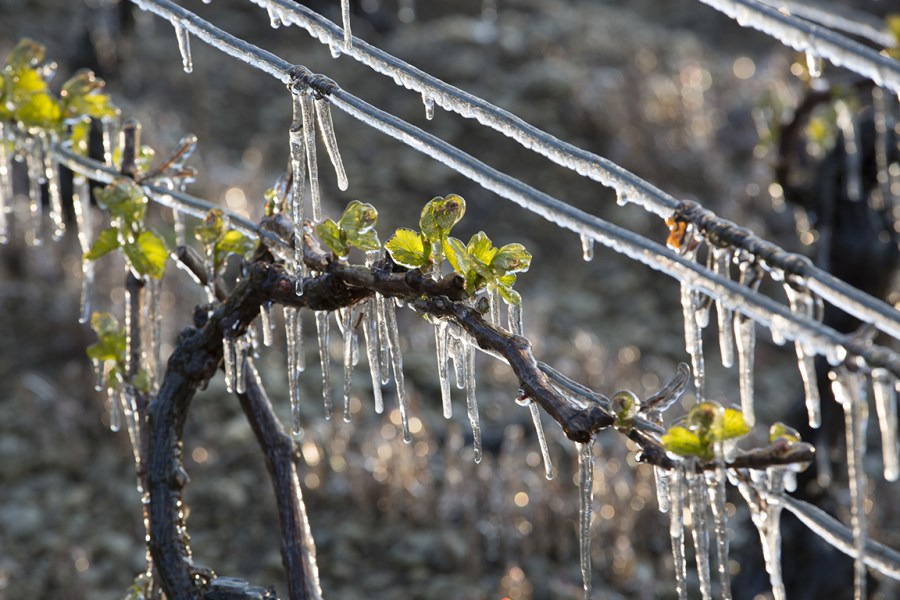 Fresh in many of our memories are the devastating frosts of May 2020, and the chills of 2021 – with cruel low temperatures that descended on the new, tender vine tissues causing irreparable damage. With such valuable crops, and to avoid sleepless nights, Vineyard speaks to some of the companies offering frost protection measures.

The 2020 WineGB frost survey, reported in the January 2021 edition of Vineyard magazine, carried out by Stephen Skelton, chair of the WineGB viticulture working group and Steve Wain from Mapman, revealed that from the 198 separate frost reports received 60% of these claimed that they had no frost protection in place. Despite good site selection to avoid frost pockets, there may be areas that are prone to frost, depressions or low-lying corners where the cold air can settle. Active frost protection measures include irrigation and sprinkler protection, biological stimulation, as well as physical heat from candles, and fans to raise air temperature. All at a cost, but these have to be considered against the financial implications of crop losses.

Plantex UK, based in Canterbury, Kent, offer free advice and planning for frost protection in vineyards using irrigation and sprinklers, as well as suppling, installing, maintaining the systems and supporting customers. “The sensors and controllers make management easy for our customers, as the system can be fully automated and used from an app. It has been said that the system is almost 100% effective at protecting buds,” explained Ewan Worsley, General Manager. “The Sprinkler system is used in a strip format along the vines, with one sprinkler per post. When temperatures drop the sensors turn on the system spraying water onto the vines, and as the water cools it creates a frozen layer of ice around the bud. The science behind it is: when water is freezing, it generates a small amount of heat which will protect the bud. It is important that the water is continually sprayed for the heat to continue to be produced until temperatures rise again. It is particularly effective against radiation frost, and the running costs are low,” Ewan continued.

According to Plantex, to ensure effective frost protection the system delivers several pulses of water per minute, providing continuous watering over a large area for many hours. “The system is designed to use less than 50% to 70% of the water required by full-coverage sprinklers – reducing operating costs by up to 30% compared to other systems. The design also provides uniform water distribution, irrespective of topography – even on sloping terrain and long rows, due to a unique flow regulation mechanism. Our systems are simple to install and are made to withstand agrochemicals and adverse weather conditions,” added Ewan

Commenting on the Plantex UK irrigation system, Vineyard owner Neil Bainbridge said: “Judging by the extent to which the buds have now burst, I can say without fear of contradiction (and judging by the devastation wreaked on my Wisteria) that the Plantex system saved this year’s crop on its first day of operation.”

A spokesperson from NIAB EMR at East Malling also commented: “After four years the system is still working well and has saved our crop many times.”

AntiFrost, a natural biostimulant from UK based company CropAid, increases the plant’s natural resistance to cold and frost injuries. “Plants naturally protect themselves from cold and frost injuries by producing their own antifreeze proteins. Some plants produce more than others based on their genetic properties, as well their growing environment,” explained Aydin Tanseli, Director. “It’s a natural product, certified by the Soil Association,” he continued.

“After the application of AntiFrost, the plant will tend to have increased photosynthesis activity. The product contains Thiobacillus bacteria, with rusticyanin, oxaloacetic acid and pyruvic acid, which is applied with a blend of minerals. The product is used as a spray and is absorbed through stomata of the leaves and stems, and also via the roots, where it stimulates and enhances the biochemical processes in the plant’s natural Krebs Cycle. This results in the production of the plant’s own antifreeze proteins (AFP) and new glycoproteins. These proteins interact with the water in the plant’s cells which reduces or stops ice nucleation – thus preventing cell rupture and death. The plants that can produce these proteins will have resistance to cold and frost injuries. After the cold and frost stress is over, the AFP will be consumed by the plants during their growth – which can increase yield and quality. The effect can last up to 14 days but is most effective within the 48 hours after the application.

“CropAid’s AntiFrost has been used successfully by many growers worldwide as it is cost effective, environmentally friendly and offers long protection with increased yield and quality in return,” concluded Aydin.

A customer in France commented: “In a land where vineyards are widespread, we had the product applied in a Sauvignon vineyard a couple of days before the frost. The temperature dropped to about -3 °C. The vineyard was saved. Those around were severely damaged.”

The Crop Candle Company Ltd, based near Henley on Thames, supplies frost candles so well known to wine regions around the world – but the candles use 100% vegetable bio-degradable wax. “These are better for the environment and burn hotter and longer than others,” explained Tim Jeffs, Director. “Also no other company offers the 12 hour and 10 hour candle – as well as the most important aspect which is #refillRevolution. Hundreds of thousands of empty ‘bougies’ – sometimes with non biodegradable wax – end up in landfills every year. Vineyards can use the Crop Candle cans for three to four seasons and just purchase refills at a reduced cost,” added Tim.

The candles are placed out at the beginning of frost season under the vine, when a frost warning is received, they are moved to the centre of the rows. “All our candles come with a eco-firelighter to speed up their ignition in the early hours – taking one person about 10 -15 minutes per hectare. At bud burst or woolly bud stage we recommend 250 candles per hectare, and at later stages this is increased to 400 candles per hectare,” said Tim.

“In my view the sooner all UK vineyards use our candles the better it will be for the environment. If there is no frost then our candles can be put away until the following season or stored for up to five years.
We have talked to Chris Foss from Sustainable Wines Great Britain (SWGB) with a view to seek grants for vineyards to use these candles.

“Our new candle this year is far superior to any other that has been on the market. We are the new ‘Fever Tree’ in the candle industry and are constantly looking to where we can improve our product for UK vineyards,” concluded Tim.

Dillons Vineyard commented: “We trialled 120 candles against our more regular supply from France. We were impressed. The Crop Candles lasted longer for sure. We found them very easy to light. We also particularly like the refill capability that has been added this year.”

France based company Stopgel, produce the Stopgel Green anti-frost candle, to protect vineyards from frost while respecting the environment. “The Stopgel Green anti-frost candles make it possible to keep temperatures above 0ºC by warming the layer of air in contact with the vine,” explained Cédric Chazalet. “Depending on the number of candles used, the temperature can be kept above 0ºC even during freezing weather down to -7ºC. Stopgel Green offers an efficient heating method using 6 litre candles evenly spaced across the vineyard, with a burn time of around 8 hours. The size of the candles makes it possible to stay within the zone of temperature inversion, thus allowing the circulation of heated air at the height of the vines. A chart to help with candle density is provided on our website.

“The Stopgel Green anti-frost candles are of 100% natural origin, using the wax Stearin, to help protect your crops in a more environmentally friendly way – using anti-frost candles that emit very little smoke. Using a raw material which is unique to our products, Stopgel Green candles perform better as they have a significantly higher calorific value per hour than the “other” candles on the market, producing on average 25.5MJ per hour where paraffin candles are usually between 15 to 18MJ per hour,” concluded Cédric.

Raising the temperature with Agrofrost’s Frostbuster

The Frostbuster and Frost Guard frost are two frost protection machines produced by international company AgroFrost. “Unlike other frost protection systems, the principle is not based on raising the temperature above the critical values, but on phase transition,” explained Patrik Stynen, Director. “Or in this case by controlling the forming of hoarfrost, the feathery type of frost.

“Where our machines are used, we notice a significantly lower formation of hoarfrost, which is the biggest enemy for the soft tissue of flowers, shoots and buds – but there is a way to use this enemy for protection,” continued Patrik.

“The transformation of vapour into hoarfrost is called desublimation or deposition and liberates a lot of energy,” he explained. “This energy is transferred to its surroundings, in this case the surrounding air but above all into the soft tissue. It is the hoarfrost that normally causes most damage – this is because the ice crystals extract energy and humidity from the flower. Without protection, the layer of hoarfrost will increase and finally cause damage by dehydration and under-cooling.

“With our equipment we pass with a hot air stream, every seven to ten minutes, part of the ice evaporates (called sublimation) and the remaining ice gets energy from the passing air. The higher the humidity, the more energy that is transferred. After a few minutes, the air cools down again, the relative humidity increases, and new rime ice will be formed. This liberates energy and gives energy to the flowers. This allows us to create an optimal protection with only a fraction of the energy input that is needed by other systems.

“The FrostGuard protects between 0.4 and one hectare, the Frostbuster between four and eight hectares, depending on the model and application. One of the many advantages is that the equipment is not fixed, and as it is mobile it can be in whichever plot it is needed – and doesn’t require planning permits. The maintenance and running costs are low – other systems can cost at least three times more for the same protected area.

“The machines perform very well with radiation frost. There’s also protection during wind frost, where the maximum wind speed is about 7 km/hr – however results are not as good as during radiation frost.

Romain Henrion, from Hattingley Valley Vineyard commented: “I wanted to tell you about the excellent results regarding the Frostguards. This year and last year we had several cold spells in the spring and the Frostguards have shown great efficiency on our sites. We were able to reduce the damage to <1% on the total plots which represents a minimal economic loss for us.”