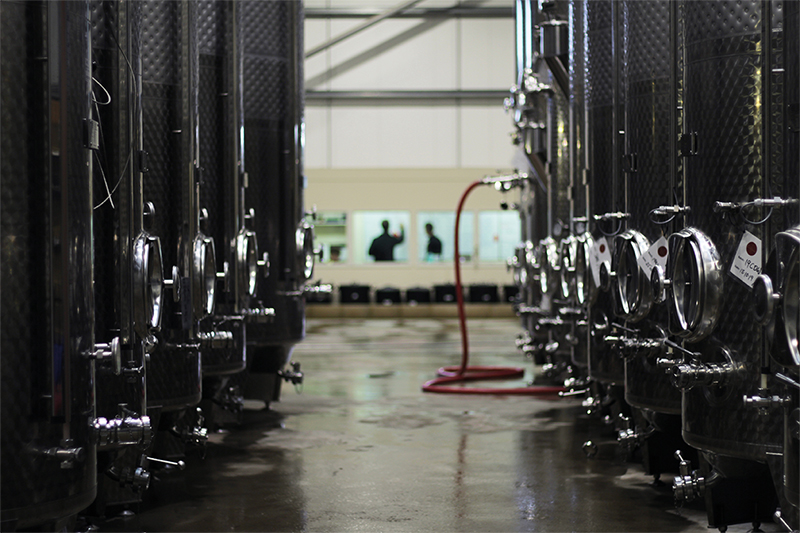 One contract winemaker has impressed with not one but three brand new wines this month.

Henry Sugden asks his clients to inform him and his winemakers what style of wine they would like them to make. This informed style defines the wine that Rob Merrick and Poppy Seeley aim for in the winery and it also helps Henry to back up their vinous alchemy with rafts of business acumen, brand building skills, sales and business management experience and also his invaluable list of contacts. This symbiotic system of collaboration and communication gave rise, in 2018, to Defined Wine Ltd, a contract winemaking business with a difference.

I first met Henry in February this year when he heckled me during a charity wine tasting event I was hosting at Vintners’ Hall in London. I attributed a wine we were all tasting to a pal of mine who is the chief winemaker for a famous Aussie brand and Henry shouted out that, in fact, a chap called Rob Merrick actually ‘made’ the wine. Of course, he was right, because Rob now works for Defined Wine and Henry was extremely familiar with his back catalogue!

I hurried over to Henry between wines to find out who he was. After 25 years in the army and a three-year stint in the City, Henry recognised that there was a shortage of bespoke contract winemaking facilities in the UK and so he summoned up his university wine society skills (he is genuinely a wine lover), moved to Kent and got on with building Defined Wine. He recruited Poppy Seeley MSc from Plumpton, who has worked all over the wine world as assistant winemaker, and superstar chief winemaker Rob Merrick from Australia. The Gandalf of the English wine scene, Owen Elias, consults for this business, popping in each week either to answer tricky questions or simply to nod sagely. Rob has an immense amount of experience in the wine world and yet he had never worked with Bacchus before so Owen was invaluable from the off. Henry is at pains to point out that his is a super-modern outfit, taking a New World approach to everything from the high level of equipment in the lab to the bespoke winery software systems he employs. Nimble, fast to react and with the ability to make small parcels as well as sizable labels, this is an exciting time for this well organised company. While they have put expansion plans on hold thanks to Covid-19, and its inevitable deep impact on on-trade sales, Henry points out that grape prices might fall this year and so it would be a cunning time to start a new brand if anyone wanted to take the plunge. Ever the prospector, he is right and I think that people might take him up on this challenge. While many of Defined Wine brand owners are doctors, lawyers, bankers and the like, they are all kept up to speed with Zoom-tutorials on all aspects of viticulture and winemaking, which Henry hosts, drawing on expertise from around the world, and so communication with his informed clients is inevitably smooth and rewarding. It means that these clients are inextricably involved in the design of their own bespoke wines.

With this impressive setup it was no surprise that word of mouth referrals resulted in an avalanche of phone calls and there are no less than 23 clients signed up in their very first year of trading. My brief this month was to write up newcomer wines and so I have followed this instruction to the letter with a debut winery and three debut wine labels! The wines overleaf are all first time wines and I tasted all three of them unfinished and unbottled on 2 April so that I could give my readers three genuine ‘scoops’ this month.

Considering that these are all the first release wines/vintages for each of their estates this is a simply stunning trio and I must take my hat off to Henry Sugden, Rob Merrick and Poppy Seeley for their extremely impressive work. Put these brands in your memory banks – these are all wines to watch!

The vineyard from which these grapes were harvested was only planted four years ago, but these vines are clearly happy and thriving because this wine is drop dead gorgeous.

Wayfarer has set out to only make still wines – a philosophy I applaud in this fizz-filled landscape. Based near Hollingbourne, east of Maidstone, the idea here is to make a serious red wine in due course, but with these youthful vines a rosé was the natural choice in this vintage and it is simply stunning. The equilibrium between the component elements is exquisite. There is the merest touch of colour and the nose boasts discreet rosehip and blackcurrant sorbet notes. There is a cleansing grapefruit acidity on the finish and I feel that if a rosé of this standard can be made in year one of this vineyard’s life great red wines will inevitably follow. Wayfarer has planted a second vineyard with Ortega, Bacchus and more Pinot Noir and I cannot wait to taste these beauties in the future.

The Heppington story starts in the early 19th Century when an ancestor moved to Australia, made wine and brought it back to England whereupon it won an award in 1822!

Clearly, these guys have wine in their blood and so it is great that they have decided to make their still wines at Defined Wine.  The vineyard management at Heppington is something which really impressed the Defined posse and even though Pinot Gris is not destined to be a big production for this estate, I can see it garnering much interest if this wine is anything to go by!  With a lovely nose of white pepper spice and ginger lily, which flows into a controlled, mellifluous mid-palate, this is a layered, Alto Adige-style wine as opposed to a skinny, mean Grigio or a chubby Alsatian Gris.  Attractive, zesty and superbly modern this is a vital style of wine for the UK and this debut vintage has nailed it.

Dillions planted a vineyard in Staplefield last year, so they do not expect to harvest their own grapes until this year, if all goes to plan.

In order to set the scene, they have bought a great parcel of grapes from New Hall so that they can start spreading the word.  Rob and Poppy decided to make this wine along the lines of a fine, dry Riesling and this is perhaps why I noted that it has a peculiarly kaleidoscopic flavour.  Tasting unlike any Bacchus I have seen before in the UK, Dillions Bacchus proves that new eyes are such a valuable asset in our business.  I venture that this wine will convert Bacchus atheists with its unpredictable flavour trail of rhubarb stalks and violets and when I spoke to Rob he referenced his Margaret River upbringing when we spoke about this wine and how he was reminded of some of the Sauvignons from this great region when he tasted this wine.  Fascinating and also memorable, this is another debut from this winery which will have us all on the edge of our seats.