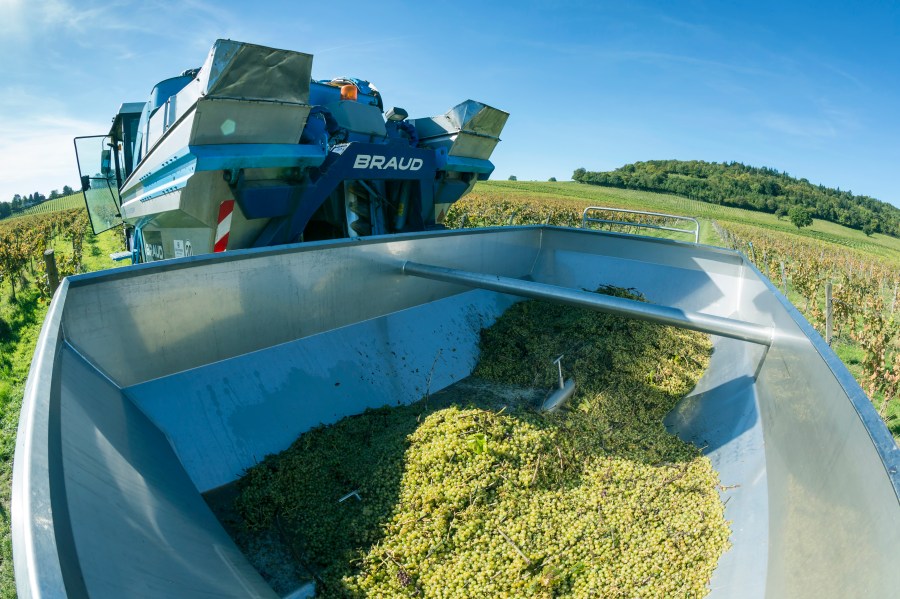 Pulling into the car park at Denbies Wine Estate at 8:30am the New Holland Braud SB 60 mechanical picker was already busy bustling its way through the estate’s Müller-Thurgau vineyard plot known as the Limes.

In the time it took Chris White, Denbies’ CEO, to explain more about what motivated them to invest in a mechanical grape harvester, the multiple benefits it brings to the 265-acre single estate and how it fits with the estate’s wider research and development ethos, around 10 tonnes had been harvested.

When Adrian White bought the historic 630-acre Denbies Estate in the early 1980s the English wine industry was still in its infancy. Fast forward to today and Denbies welcomes over 350,000 visitors per year and, with a record harvest, will be producing around 600,000 bottles of wine this year.

“After my father bought the estate he got rid of the livestock and started looking for an alternative use for the arable land,” said Chris White. “Richard Selley, a geology professor at the Imperial College in London, suggested to him that there was great potential in the land and soil for vines. Since then a lot of people have cited Selley’s research on the correlation between the Champagne region and the South of England.”

In 1986, akin to the majority of viticulture enterprises in the 80s, originally only a small parcel, around 5%, of the estate was planted to see how suitable it would be for grape growing. Following positive results, and a desire to plant multiple varieties which could be blended depending on the season’s growing conditions, the area under vine was quickly expanded and with 16 varieties spread over 265-acres, Denbies is, for the time being, the UK’s largest single estate vineyard.

“Dad knew that he couldn’t compete on price and quality without having the economies of scale,” said Chris. “European vignerons benefit from cooperatives which share equipment, but we didn’t have access to a system like that. Instead by turning all the arable land over to vines, we were able to create a full-scale vineyard which justified investing in our own winery and the costs of bringing in the right expertise and equipment.”

With an enormous area of vines to harvest, one key piece of equipment which was sought-out was a mechanical grape harvester. While the original machine was quite vicious compared to the Braud SB 60 the estate purchased in 2007, the principles and benefits of using the mechanical picker have remained the same over the last 30 years.