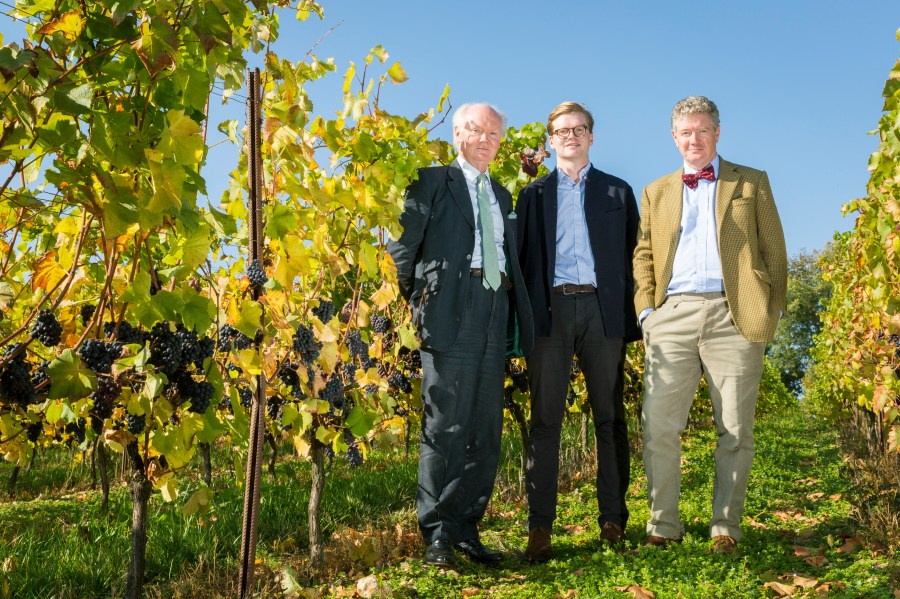 In 2008, Christian Seely received a phone call from a good friend, and soon to be business partner, Nick Coates, who, after months’ geologically mapping England in search of a suitable chalk site, had stumbled across the perfect place to plant a vineyard just two miles from his house near Overton, Hampshire.

Coates and Seely, who had met at business school and bonded over a shared passion for wine, had formulated a plan to develop their own traditional method English sparkling wine in 2007, shortly after Nick retired from his financial career in the City.

Before committing to the seven-hectare block on the Hampshire Downs, in 2009, Christian who is also the managing director of AXA Millésimes, the arm of French insurance giant AXA which owns leading wineries such as Château Pichon Baron and Château Pibran in Bordeaux, Domaine d’Arlot in Burgundy and Quinta do Noval in Portugal, wanted to get the land properly assessed.

“We sent the soil away to Bordeaux for analysis,” said Christian Seely, co-founder of Coates and Seely. “We didn’t tell the laboratory where it came from and I remember them saying “ah, Monsieur Seely, this soil is not from Bordeaux but from Champagne” and I proudly said “no, it’s not, it’s from Hampshire”.

With confirmation that the land had an identical soil profile to that in the most established sparkling wine producing region in the world, the duo embarked on their adventure, planting half of the new site with Chardonnay and half with Pinot noir.

Nick, however, was not the first to have identified this plot as prime grape growing land, as on the opposite side of the valley Wooldings Vineyard had already been established in 1989 by the late Charles Cunningham.

At the time of Nick’s discovery, Wooldings Vineyard was being cared for by Charles’ mother, Daphne Cunningham. While Daphne was striving to keep the vineyard alive in her son’s memory, it had fallen out of commercial production and a partnership with Coates and Seely provided an opportunity to see the site restored to its former glory.

“The spirit behind the project when we first met Daphne Cunningham was to revive her son’s legacy,” said Christian. “There were several varieties which we grubbed, as we didn’t want to work with them, but very interestingly, Charles had planted just over two hectares of Chardonnay, Pinot noir and Pinot meunier. We pruned these old vines right down for two years and the site came back to life. We vinified our old vine Chardonnay on 9 October; they give naturally low yields, even in a year like this, and the quality of the juice is just wonderful. The fact that Charles’ original plantings give the best wine is incredible and is an indicator of what the future holds for Coates and Seely as the new site matures.”

As well as ensuring that their vineyard soil matched that of Champagne, having worked in the French and Portuguese winemaking industries for 25 years, it was only natural that Christian would look to import a wealth of expertise and equipment to help Coates and Seely achieve its aims of creating a world-class sparkling wine.

From using consultants in Champagne to select the right clones and rootstocks, which were sourced from Pépinières du Comtat, to employing a Portuguese vineyard manager, who now considers the site as his own, and sourcing everything in the winery, including the winemaker, from France.

“Although Nick and I are both very English men, we have always taken French advice,” said Christian. “My life remains divided between France and the Douro Valley and all the people I work with are used to working with French winemakers. We are very happy taking inspiration from the French.”

One rather unique import from France is a collection of giant egg-shaped concrete wine tanks, which can only be found in the UK at Coates and Seely’s winery. While the first concrete egg was only produced in 2001, having been commissioned by Michel Chapoutier, the manufacturer Nomblot has been producing concrete fermentation vessels since 1922.

“Nomblot’s first trade was crafting mausoleums – concrete blocks with ledges for families’ coffins – until an enterprising member of the family decided that they could use the same mould to create vinification vats,” said Christian. “In the beginning, we wanted to experiment with fermentations in wood and stainless steel, and we had heard a lot of good things about the eggs so we decided to try concrete too. We have been very happy with what we get out of them.”

The concrete eggs have many benefits over stainless steel and wooden vessels. There is greater control over temperature; during the fermentation process, the egg shape forces the lees to be circulated in a vortex; and the concrete is also permeable, which allows oxidation to take place, without adding oak associated flavours to the wine.

“The concrete eggs were a very significant investment but they will last a long time, perhaps 50 years,” said Christian. “We haven’t compared them with the cost of barrels over time because it isn’t about economics. Our reason for no longer using wood was to do with the style of wine we wanted to produce.”

While the estate no longer uses wooden barrels, in the early years, a parcel of Chardonnay was spilt and fermented in the three different vessels. As expected, the stainless steel produced a very pure and clean result, the wood was oaky and full, and what came out of the eggs was somewhere in the middle; the best of both worlds, with purity but a much fatter and fuller texture.

“The results of experimenting have meant that we have gravitated towards just using the eggs and stainless steel,” said Christian. “We now use the concrete eggs for our very best grapes. Our 2009 La Perfide wines, which have been our most successful releases to date, were vinified in concrete and I think we have tasted our future La Perfides today, and again those are both in the eggs.”

To produce its range of traditional method sparkling wines, Coates and Seely continue to blend across the different mediums, seeing multiple options the best way to produce world-class wines.

“We allow the winemaker to decide according to the personality of the fruit,” said Christian. “It is well worth having plenty of notes in your piano because the year you think that you cracked it and found the winemaking formula is the year you have failed. Producers should always be ready to try new things and improve on what happened last year, always tweaking things to get better, and that is what we are doing at Coates and Seely.”

To read the full article go to the online edition.