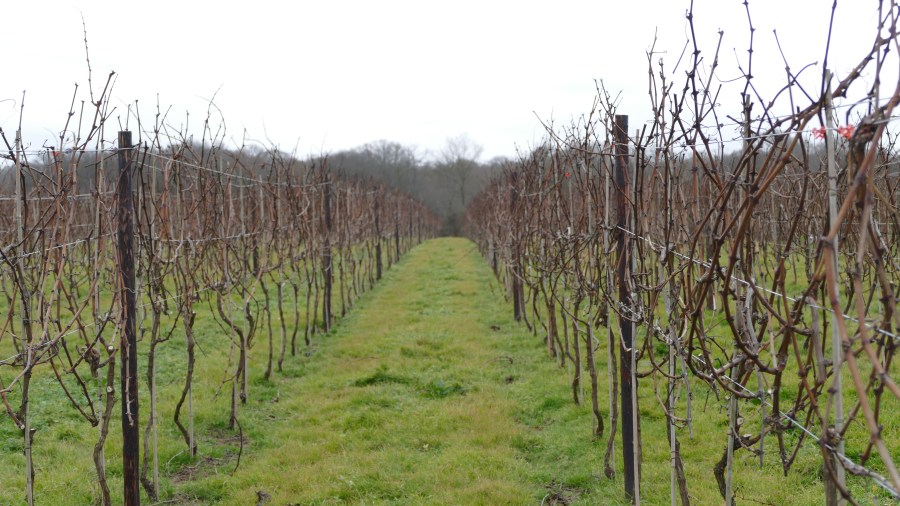 As the craft industry has expanded with increased passion for both real ales and locally produced English wines, the farm in Sandhurst, Kent is prospering in a way Chris never imagined.

“When we first started planting a few vines in 1986, I would never have imagined the industry to be at a level where it is now,” said Chris. “I feel lucky that we grow vines and hops because the craft industry is now amazing. The whole industry is extraordinary.”

In the early days, with no real market for grapes (Carr Taylor and Lamberhurst Vineyard being the only purchasers) Sandhurst worked with Stephen Skelton and Owen Elias, then at Chapel Down, to produce its range of own label wines.

With the growth of the industry, in 2009 Chris decided to move away from the sales and marketing of his own wines to focus purely on growing. The vineyard now provides fruit, under long term contracts, to six of the country’s major estates.

“When Chapel Down came to Tenterden the prices for grapes were very low,” said Chris. “We would supply them with our grapes and request the wines we wanted back to sell. Today, a lot of new wineries are put on unproven sites and some of them subsequently find that they are frost prone and so there is demand for grapes.”

As his reputation as a grower for Chapel Down spread through word of mouth, Chris was approached by more estates and with 74-acres now planted up, the farm is now full.

“In 2008, we were approached by Richard Balfour-Lynn and the vines for Hush Heath then went in in 2009,” said Chris. “After the terrible harvest of 2012, when some vineyards picked nothing at all, Litmus Wines were looking for growers. Stephen Skelton, on our behalf, approached them and Denbies Wine Estate were interested.”

“Owen Elias had made our wine at Chapel Down for years so when he was involved with Kingscote he knew what we were capable of producing and what he could make with it,” said Chris. “People talk, so it has all come from word of mouth.”

While each contract is different, with varying agreements, payment terms and varieties, all are long term. With the vines at Sandhurst under contract until Chris turns 65, focusing on averages and having secure homes for the fruit provides a sustainable business model.

“Last year people were willing to pay silly prices for grapes with offers of three to four thousand pounds per tonne, but growing without a contract it is too risky,” said Chris. “In years like 2010 and 2014 when there were big crops, if you had a large area not under contract it would be possible to find you have no markets for the fruit. We have experienced this with hops. I would much rather have an average.”

Having recorded yields from different varieties on the farm over the past 30 years, Chris is able to estimate outputs and potential income for all his contracts.

“When we made our contracts with Lyme Bay and Denbies we knew what the yield outcomes were likely to be,” said Chris. “We have records of returns from every harvest, so we can look at what each variety has done per acre each year, to give an idea of what the income is likely to be.”

With no end product to sell and English yields often low, the vineyard management at Sandhurst has to ensure that the growing is self-sufficient and that the costs are financially viable.

“When we started the vineyard, my father said he was happy for us to do it, but it needed to be costed,” said Chris. “We originally worked on two tonnes per acre as the breakeven, but in actual fact our yields are better than that and this year, despite having frost damage, we achieved an average of 2.76 tonnes per acre.”

Transferring his knowledge of wire work in the hop garden to the vineyard has allowed Chris to lower the infrastructure costs and there are no metal posts to be found at Sandhurst. Instead, of purchasing expensive anchorage systems, Chris works the wire, splicing, knotting, winding six-inch anchors, similar to those used in Spanish strawberry tunnels, into the ground.

“It is cheaper and if a post gets broken we can just replace it,” said Chris, “A lot of people get a shock the first time they see our vineyard because it doesn’t necessarily look tidy but the result is the same and we can still get a crop out of it.”

Labour costs are also spared by not having to follow the usual practises associated with metal posts. Instead of lying wires down on the ground after pruning and walking through several times to do wire lifts, Chris simply tucks the vines in once and trims them.

Pruning in the vineyard commenced on 8 January and with the team, which includes Chris, his wife Nicola, a group of locals and a team from Vine Care, currently working at a pace of 10 acres per week, they are on target to finish the cutting by February.

“We use two types of electronic secateurs, from Electrocoup and Pellenc, which save about 10 hours compared to doing it by hand,” said Chris. “We don’t do things quite the way most do. Instead of working on a double guyot system with 8 buds per meter tied flat on the wire, we will arch the vines in the Pendelbogen style with some vines having around 14 buds. To explain it to our pruners we call it the McDonalds sign because it’s universal and everyone knows what to do.”

Conscious of yields and the English climate, this system proved effected in the frosts experienced by many in 2017 and while Chris experienced up to 70% damage, the vineyard still achieved a full crop of 177 tonnes.

“You have to do what is right for that vine and I don’t agree with a pruning formula; we look at each vine as an individual,” said Chris.