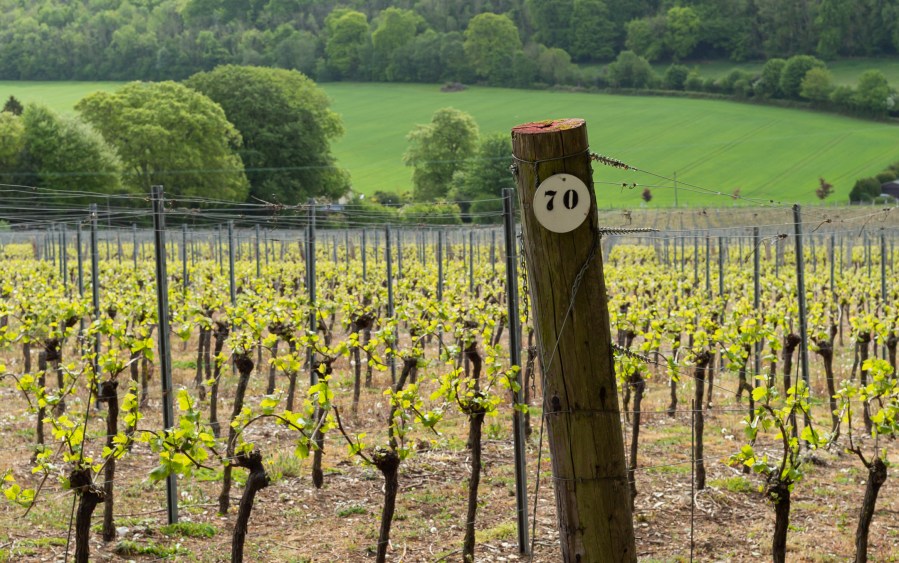 Established in 1952 by Major-General Sir Guy Salisbury-Jones, Hambledon vineyard is a British, family-run wine producer and claims to be the oldest commercial vineyard in the UK – celebrating its platinum anniversary, along with someone else…

To most people – and certainly to sports fanatics, the Hampshire village of Hambledon is best known as the cradle of cricket. Hambledon Cricket Club played an important role in the history of the sport and features prominently in the museum at Lords Cricket Ground (see page 27).

But Hambledon has another ‘best’. To wine lovers, Hambledon is best known as the oldest commercial vineyard in the UK – and is celebrating its 70th, platinum, anniversary this year. The vineyard boasts the ‘finest chalk soil and cool climate, which makes it exceptional terroir for creating world-class sparkling wines’.

Ian Kellett bought Hambledon vineyard in 1999. As a passionate wine lover, Ian loved the winemaking heritage of the property. After analysing the commercial potential for English wine, he began studying oenology at Plumpton College in Sussex with a view to restoring Hambledon to its former glory.

Research convinced Ian that sparkling wines were the future and in 2005 he planted a 10-acre ‘test bed’ of Chardonnay, Pinot Noir and Pinot Meunier to see which of the 27 combinations of vine clones and rootstocks gave the best results. A team then travelled to France to meet Hubert de Billy, son of the chairman of Pol Roger, to revive a former relationship between Hambledon Vineyard and the famous Champagne House.

Having proved that the site could grow quality Chardonnay, Pinot Noir and Pinot Meunier, the vineyard was converted into a company in 2010 and 2011 enabling funding to be raised from third party minority shareholders. The company was also successful in applying for UK and EU government funding via the RDPE programme.

Tobias Tullberg, Hambledon’s associate winemarker, hailing from Göteborg in Sweden told Vineyard: “From the 90s we have gone for minimum intervention, not biodynamics but working with those principles. It is all about quality – not messing up. We do not get too technical, we do not look at numbers. We do as little as possible – that is what Hervé does. It is daunting, to do nothing. It is tempting to go by the book. Some winemakers do too much,” opines Tobias. “Hervé has taught us to ‘listen’ to the wine.”

Hervé Jestin is a consultant that comes for a week at harvest and for blending. Hervé Jestin worked at Duval Leroy and WineSpark stated: “When it comes to organic Champagne, there’s one winemaker that commands respect and authority above all others – Hervé Jestin.”

Tobias Tullberg said that in 2018, the vineyard quadrupled from 20 to 80 hectares. Last year was the first year of production. “20 hectares is like a family vineyard,” he said. “80 is altogether a different beast. Last year was a small harvest; this year should be full production.”

“It is at the April tasting that we decide (what to do). ‘Not this is that’. As to specials such as Blanc de Blancs and Blanc de Noirs, we decide after the fact (tasting). “We are about quality. We are not bothered about volume,” pronounces Tobias Tullberg.

Sadly, the visitor centre, started pre-Covid, is still not finished.

“English wines have grown exponentially. It is not like anywhere in the world. This year is looking good; get through flowering and we should have a good harvest. Frost is not our enemy with this kind of slope. Rarely have we had to burn candles.

“A key feature at Hambledon is leaving on the lees both in barrels and bottles, December through to January/February – ageing on the lees.

Malo from December to end of March. It is not warm here so the Malo is slow. Obviously, as there are no skins we have to have time on the lees. Keep the fine lees in suspension through the winter.

“The focus is on quality, so it all takes longer,” said Tobias Tullberg. “A minimum of three years for the classic and six years for the premium. At the end of March/early April, we do racking. There is a tendency to bottle early but not at Hambledon, he states firmly.

Fracturation with the Coquard presses (four and eight tonnes):

Tobias explained that with seven programme stages, the best juice comes from 3-3.5 hours, 1-3 stages. 4+ pressing harder and Stage 6 they use last. At Hambledon the tails (stage 7), which would be allowed in Champagne, are sent for distilling.

“We make decisions by taste, not numbers,” said Tobias. “Taste: you cannot learn at school,” he added.

Hambledon innoculate with traditional Champagne yeasts. “We do not protect from oxygen, which they would do in Australia. We think it is important to introduce some oxygen to interact with the juice. Any browning, which happens in Burgundy, is not a problem.

“The chalk is the ‘raison d’etre’ for Hambledon being where it is, said Tobias. “This would be worth its weight in gold in Champagne. Here, it is just agricultural land.

“The potential here (meaning: England) is astronomical. There is nowhere in the world like this. You have investors willing to invest; customers willing to pay the price. Everything goes together. It is unique in the world. England is the most interesting country in the world for a young winemaker,” says Tobias emphatically. 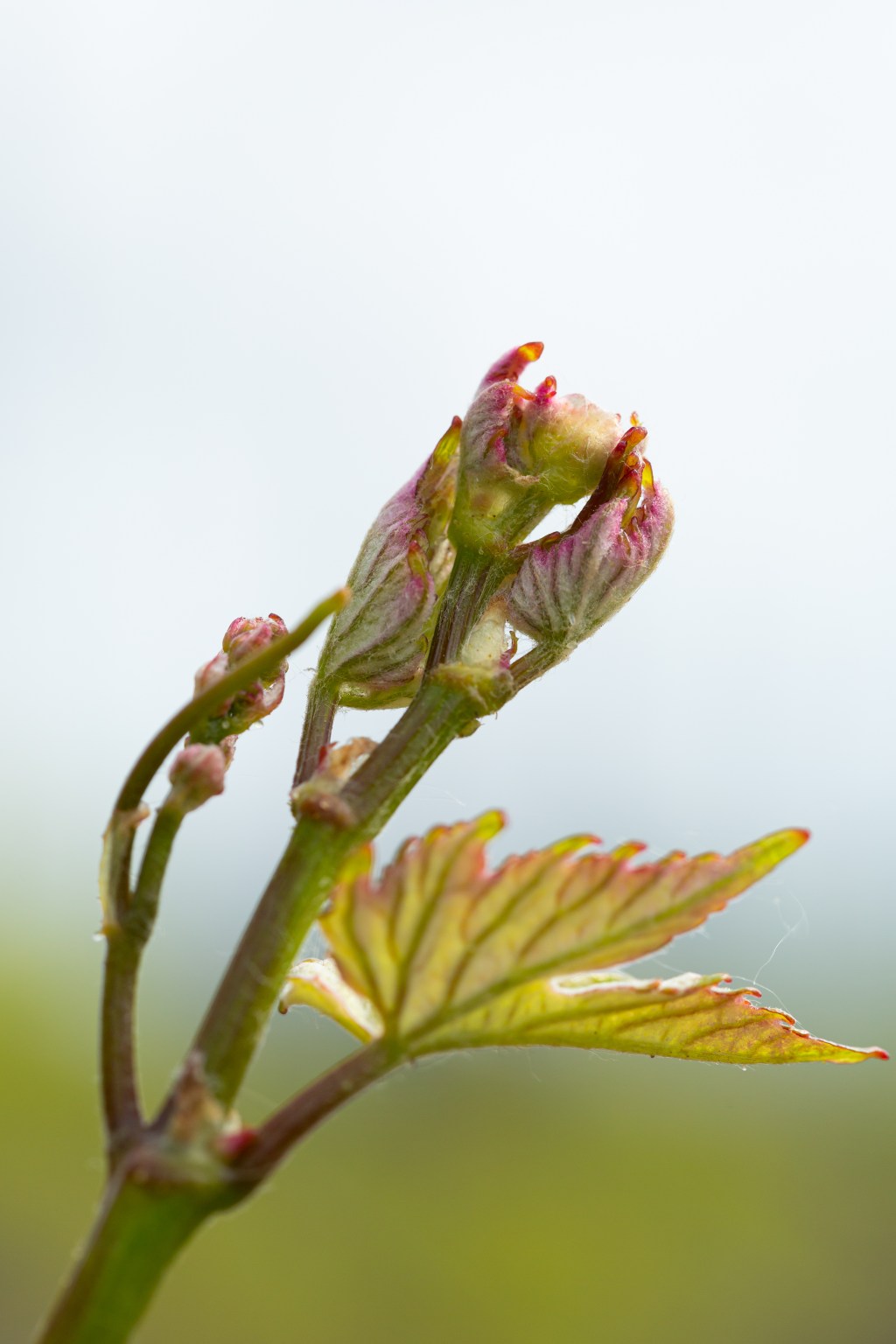 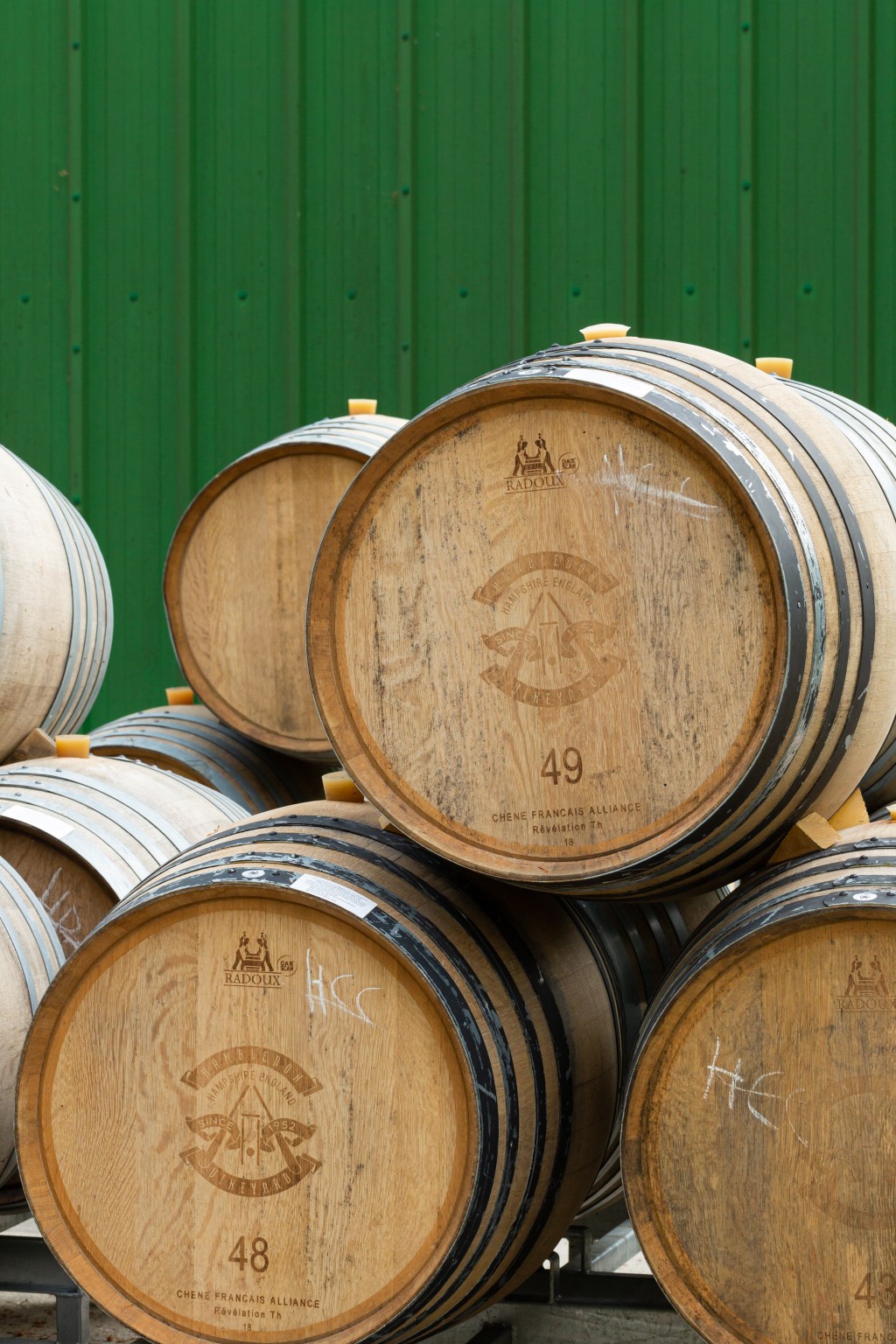 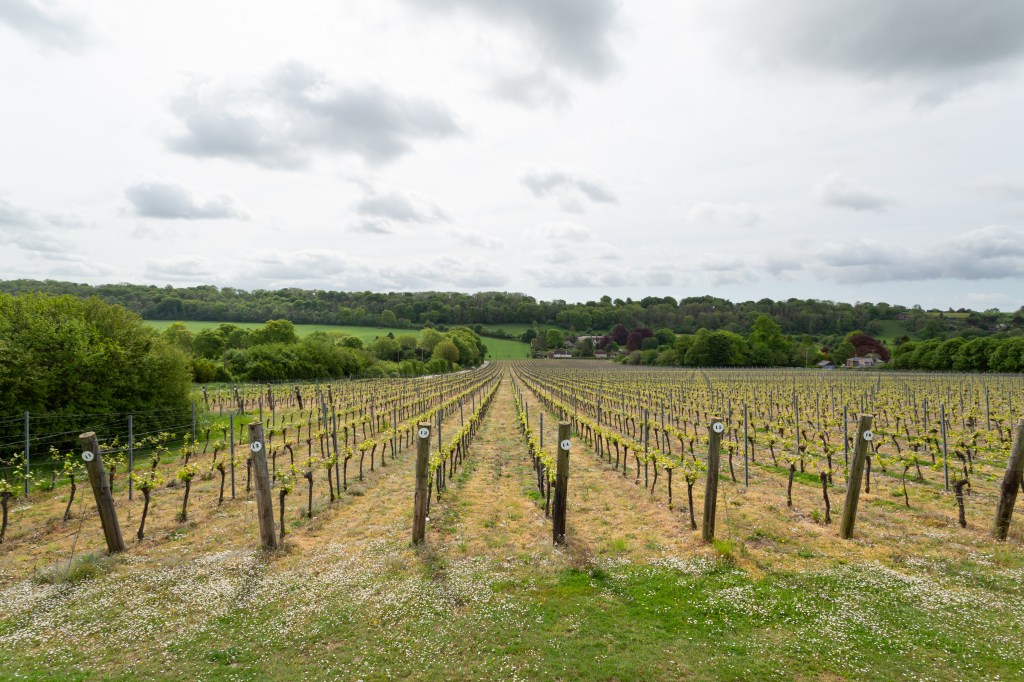 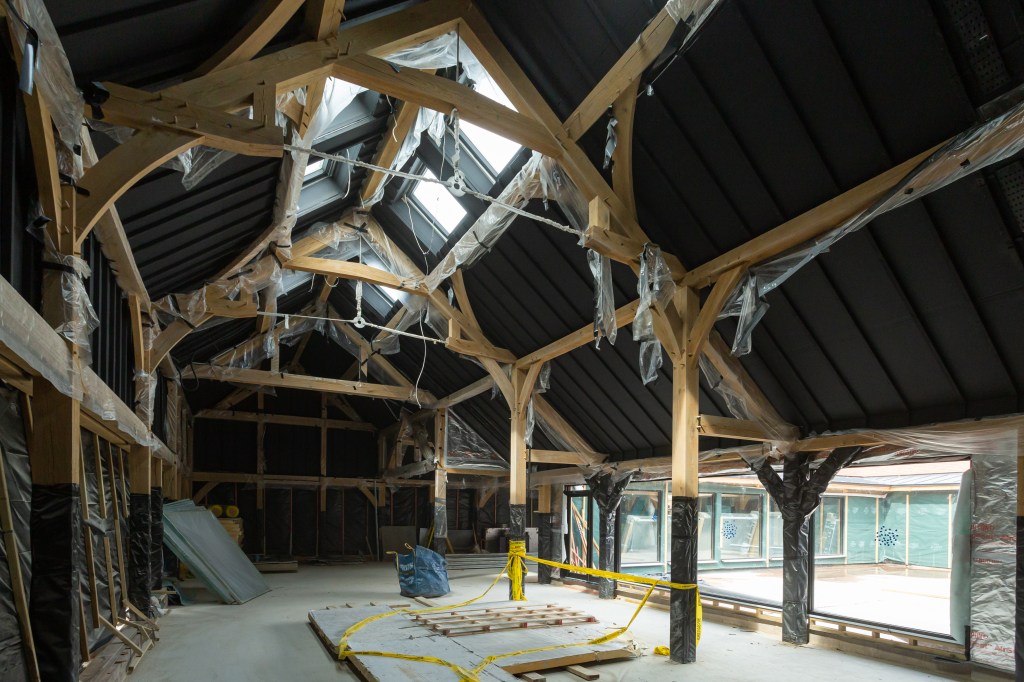 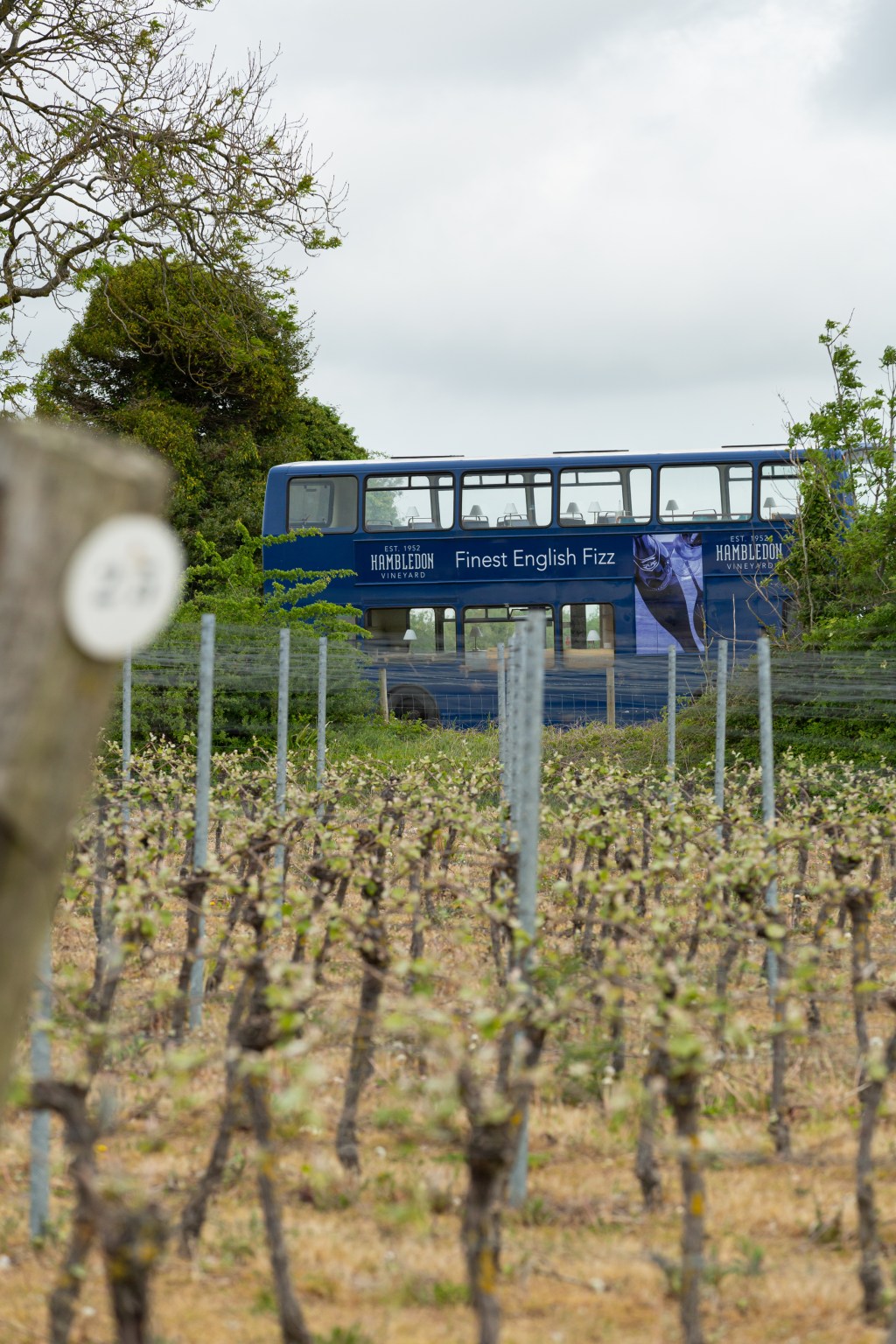 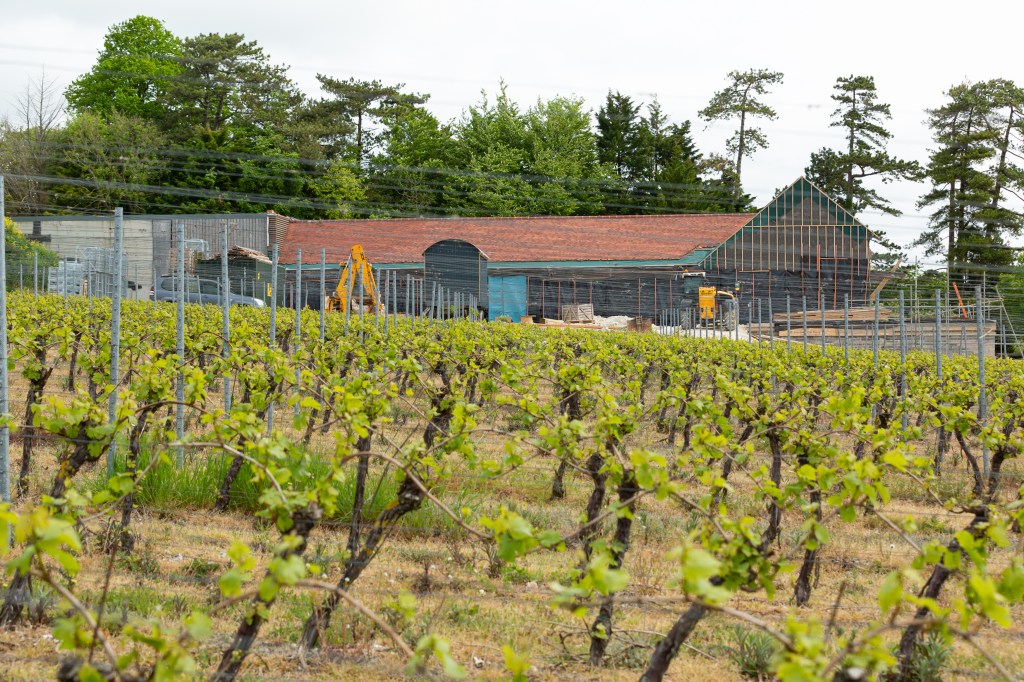 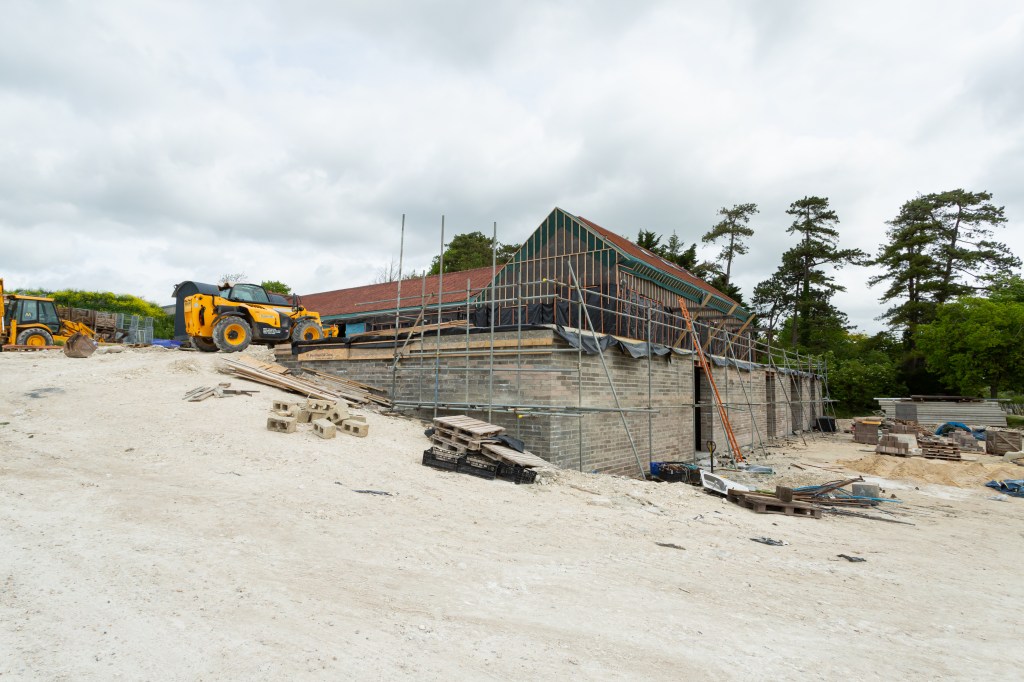 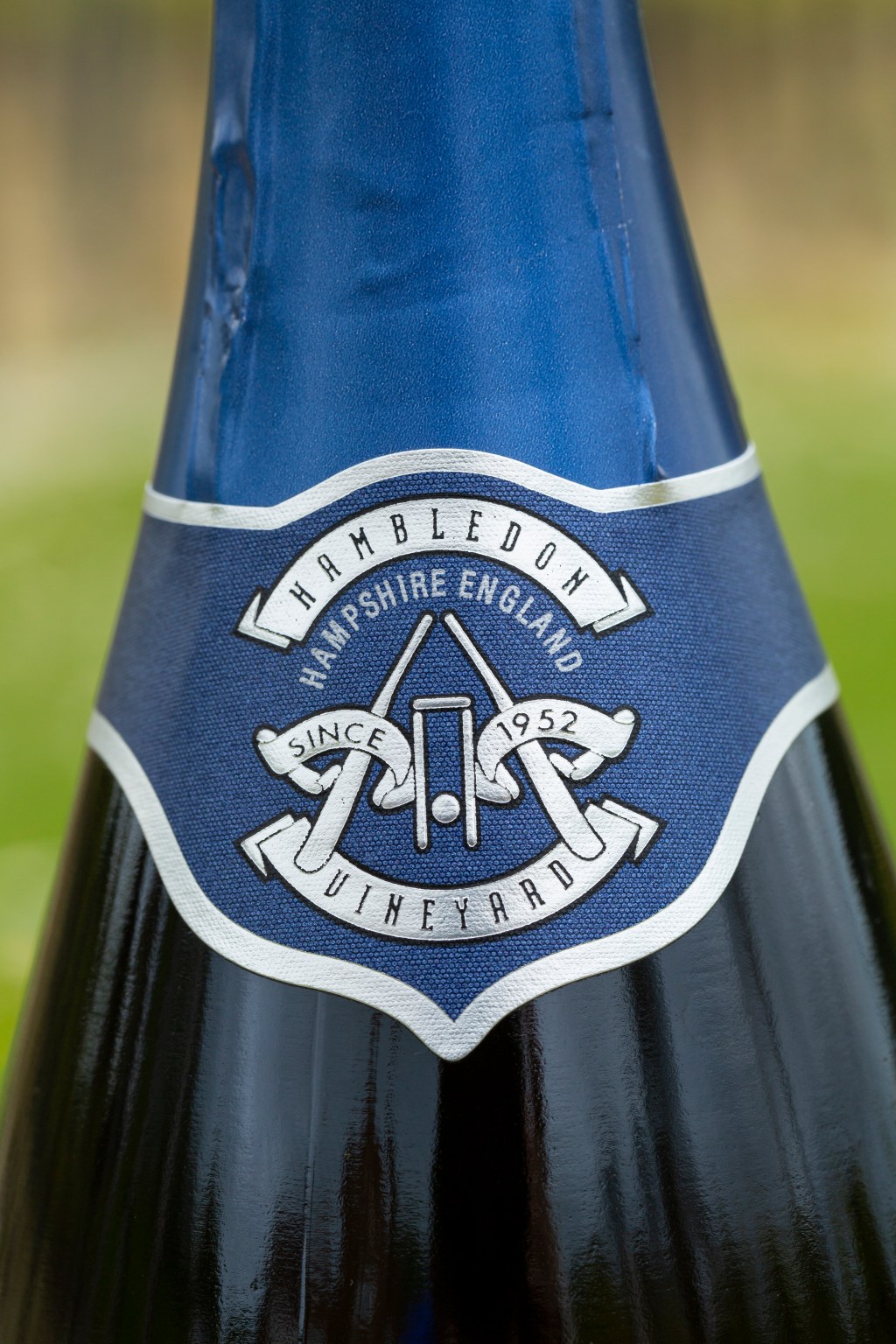 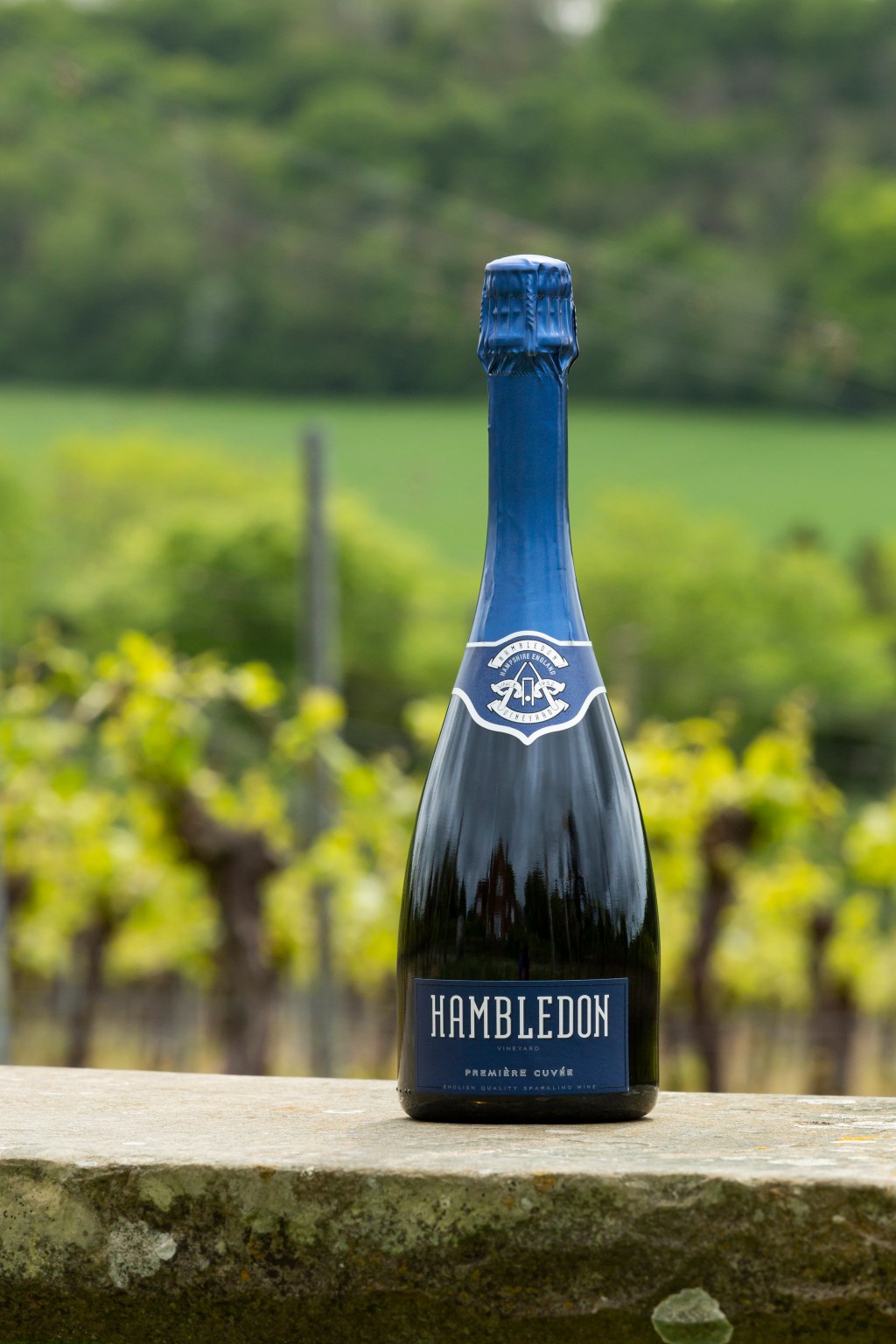 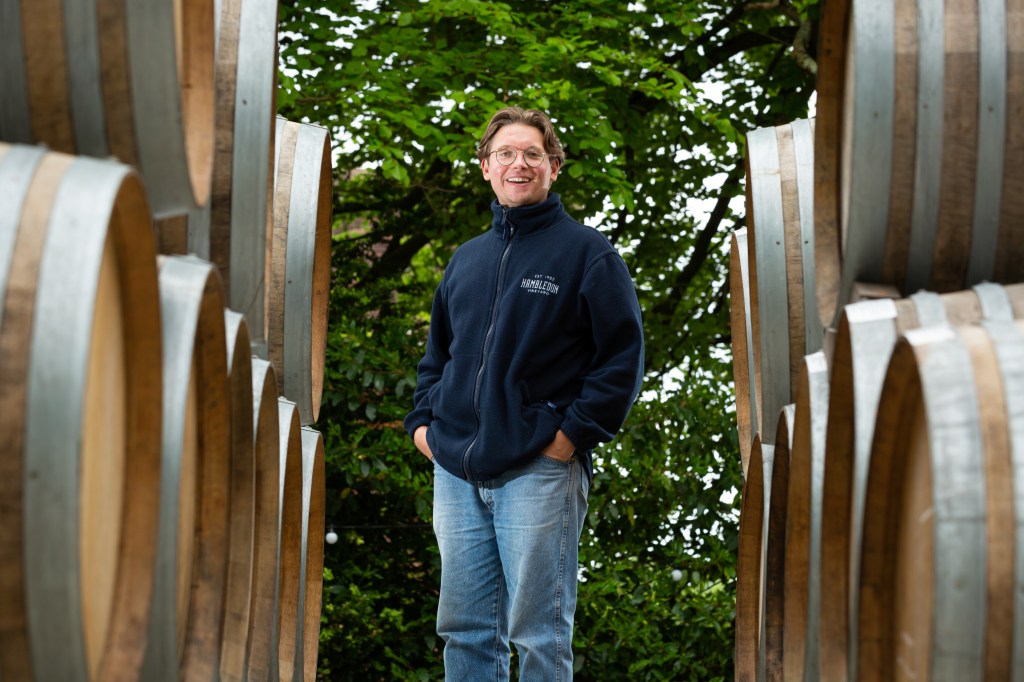 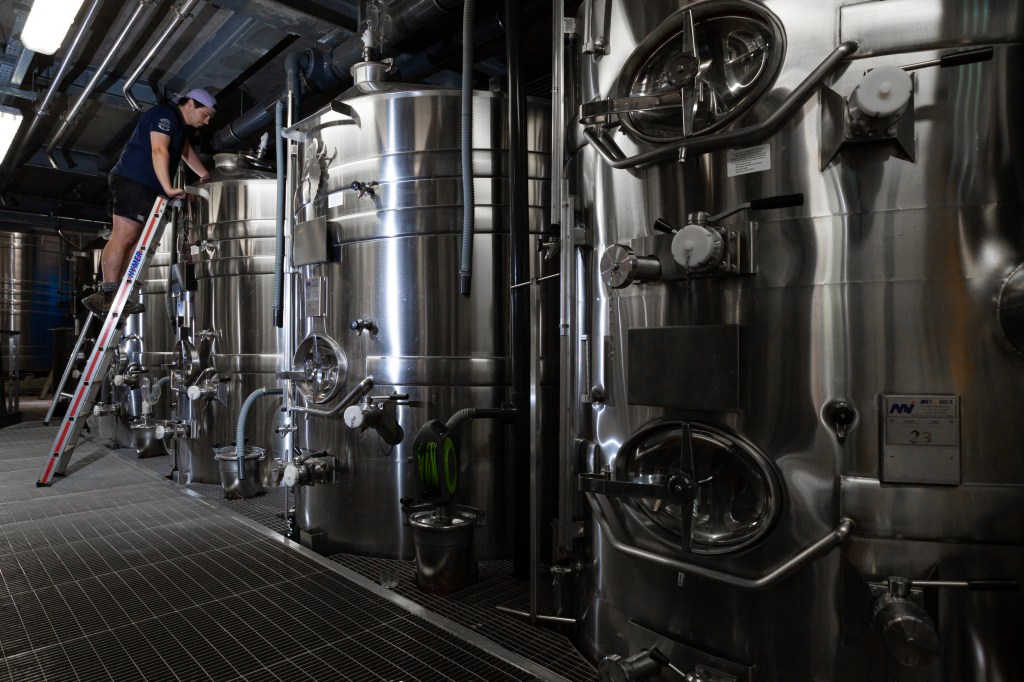 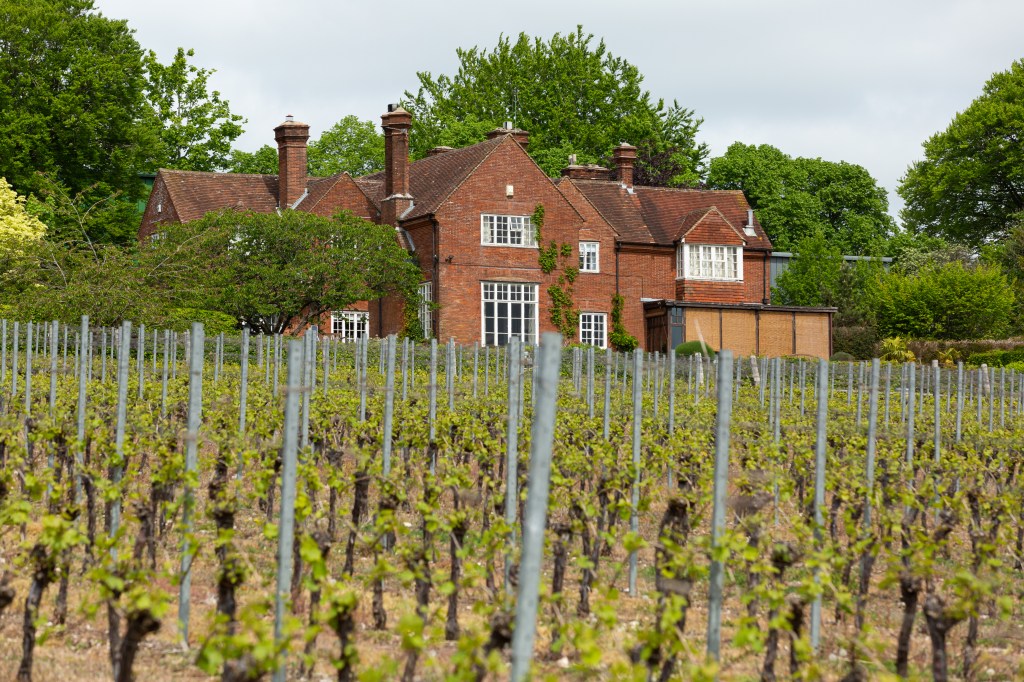 Major General Sir Guy Salisbury-Jones is looking out of the window of his new house at Windmill Down in Hambledon, discussing with his step-son what to do with the fields in front of the house. His step son replied: “Well it is south facing and chalky, and you have always loved wine and the French… how about you plant a vineyard?”

Sir Guy was a subaltern in World War 1, passed out of Sandhurst in December 1915 (what a time to graduate) and served in the trenches of France where he won the Military Cross. The French soldiers had wine rations – needless to say the British army had no such thing. These French men shared their allocated vinified grape juice with the British in the trenches and Sir Guy duly formed a bond with the French… and a love of wine.

After World War II Sir Guy served as Military attaché in the British embassy in Paris, which adds greater clarity to another story about Her Majesty serving our wine to President Pompidou at the British Embassy. Subsequently Sir Guy was Aide de Camp to King George VI, and then Marshall of the Diplomatic Corps for both King George and then for our Queen, Elizabeth II.

After a trip to the Hospice de Beaune Sir Guy is convinced. Having taken a sack of the vineyard soil to burgundy with them, the Burgundian opinion was that this would do just fine. Sir Guy has vines loaded onto the roof of his old Rover and returns to England and gets planting.

And so, the first commercial English vineyard of the modern era was born! Launched in 1952, the same year as the Coronation.

Hambledon Cricket Club played an important role in the history of the sport and features prominently in the museum at Lords. Originally a social club for local nobility, Hambledon became the foremost cricket club in England by the late 18th Century, attracting some of the best players in the country. Its original home at Broad-Halfpenny Down can be seen across the valley from Hambledon Vineyard.

At this time the wicket consisted of just two stumps. But after Kent’s leading bowler (Lumpy Stevens) bowled Hambledon’s leading batsman (John Small) through the stumps three times without dislodging the bails in one match, a third stump was introduced. This historical development is commemorated in the Hambledon logo.