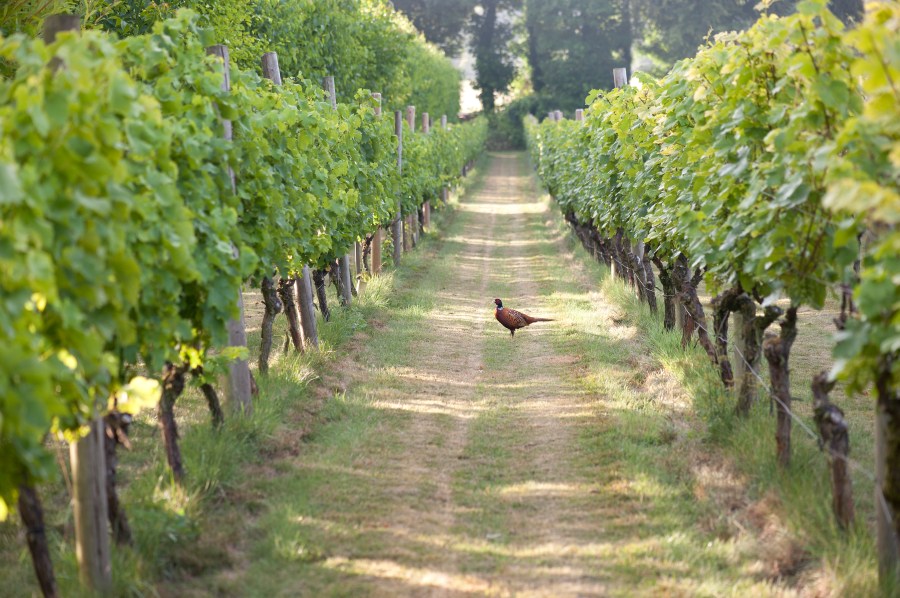 The beauty of birds and the delight of their song is perhaps even better when beyond the boundaries of the vineyard – especially around harvest when their appetite for sweet grapes can see the fruits of your labour disappearing fast! Jo Cowderoy finds out the best ways to deter our feathered friends and other pesky creatures from the vines and encourage them to go elsewhere for their meals.

As the grapes ripen, they become an appetising food source for many species of birds – they could almost be an alternative measure of sugar-levels to a refractometer.  Most vineyard managers would be prepared to share a few berries with birds, but many species are too small to take whole grapes and their pecking damages skins allowing for secondary spoilage to Botrytis and other moulds or bacteria – with subsequent quality losses.

According to the Sustainable Wines of Great Britain (SWGB) bulletin on Integrated Pest Management (IPM), “a pest is any organism that reduces the availability, quality, or value of some human resource, including arthropods, rodents, weeds, birds, nematodes, fungi, bacteria, and viruses. However, all organisms have a natural place in the world’s biosphere. To become a pest, an organism must have the potential to cause a level of injury to our vineyards greater than the cost of the control measures that we would deploy to control it (the Economic Injury Level). In practice, most growers don’t wait until the damage reaches the Economic Injury Level, but intervene at the Economic Threshold, which is the point at which an intervention is necessary in order to prevent the pest density reaching the Economic Injury Level.”

Natalia Zielonka, Postgraduate Researcher at the University of East Anglia, includes the impact of birds in vineyards as part of her research work. “It’s difficult to define ‘significant damage’ as I’m sure the definition would vary across vineyard managers,” explained Natalia. “However, I do know through talking to vineyard managers and my observations that in a bad year, birds can take 80% (or more) of the crop in a field. In the majority of cases the damage is significantly lower though, often as little as <5%. The damage is highly variable – I’ve seen 100% of the crop from the outer most row being taken by birds, but then no damage throughout the rest of the field. It’s a well-known pattern (in the UK and globally) that damage by birds is highest around the perimeter of fields, and several vineyard managers have expressed that they see those rows as a ‘donation’ to birds and nature,” continued Natalia.

Emma Bridge, Viticulturist for Vignette at Fox & Fox, Sussex, finds that, “damage caused by birds varies hugely by year and site in relation to locally available wild food sources and other businesses which might control or attract birds, such as a local shoot.”

Natalia stresses the need for observations and surveys. “The main bird species that cause damage in one vineyard may not be the same as the species in a different vineyard, and bird damage is very likely to be temporally and spatially variable – some of the vineyard managers that I work with have found one grape variety or one field to be particularly susceptible to damage by birds. Knowing where bird damage is localised and which bird species are the main pests can inform more targeted and species-specific management, which is also often the most effective,” she explained.

There are many products available that act either as barriers, visual or audible deterrents, but birds are canny creatures and the term ‘bird brain’ is unjust as they quicky adjust to new ‘threats’. Drones and lasers, designed with an understanding of bird behaviour, are indicating early success in vineyards around the world.

Netting provides a physical barrier, but they must be erected and taken down, stored, and repaired. However, Bob Lindo of Camel Valley Vineyard, in Cornwall finds that netting is a reliable method of excluding birds from his vines. “We have netted for many years, and it works 100%, whereas most other ‘mainly scaring’ methods have limited effect. In the early days, I tried bangers – which are still useful before netting can be completed, as well as electronic scarers and kites. Bird damage varies, but you can spoil major amounts of crop.  The capital cost is not high and we’re still using nets we’ve had for years. The cost to put on the nets is about an hour/acre using three people,” commented Bob.

“Heli-kites seem like a good idea as they provide predator outlines in the sky,” commented Emma, “so long as they stay up! We have found that the version with the feathery legs has a tendency to dive into the canopy, which is not effective, whereas other kites may not look as attractive, but are much better at staying up.”

“In general, single-modal deterrents – those that just offer visual or auditory stimulus, such as balloons or gas bangers – tend to be less effective as birds can become habituated to them, where they learn that the stimulus is not an actual threat and ignore it,” explained Natalia. “More complex deterrents have been found to be more effective – these are usually multimodal. For example, studies from other grape-growing regions found that fields where multiple types of deterrents were simultaneously used experienced less bird damage. Methods that exploit birds’ behaviour and psychology, such as their innate fear of predators, have also been found to be more effective, these include acoustic deterrents that uses the target species’ alarm calls, or calls of their predator, to scare the target species away from the field,” Natalia added.

“We get a bit of everything at Plumpton College’s Rock Lodge Vineyard, West Sussex,” explained Tom Newham, Vineyard Instructor. “The birds and all the other creatures are quite persistent, so we use several different methods to deter them,” he added.

“I find the kites, shaped like a bird of prey, are quite effective as long as they are set up correctly and moved around the vineyard every week or so, otherwise the birds get used to them. We also use the ‘hawk-eyes’ which shimmer in the light – and these also help to deter deer. Anything that moves in the sky helps. We have some of the audio bird scarers but do not use them as there are a couple of cottages near the vineyard,” Tom commented.

“However, the most effective method for keeping birds away from the grapes are the nets,” said Tom. “Netting does have a labour requirement – so I am very dependent on student help! We net the fruit zone, mainly limit to the exterior rows, and focus on the varieties such as Pinot Noir and other reds, which the birds seem to favour. Birds like to fly in from the trees and bushes around the edge of the vineyard, so we also net across the end of the rows, fixing to the anchor posts,” he added.

Ensuring there are alternative food sources nearby to make the grapes less attractive could be an option. “Encouraging wild fruit in hedgerows and trees seems like a good idea, but I have no proof beyond instinct,” commented Emma.

“I’m not aware of any research that directly tests the presence of alternative food sources in a vineyard or other fruit-farm setting, but I am aware of one study that was performed in sunflower fields, and it found that bird damage to sunflowers was higher in fields with little edge habitat compared to fields with complex edges which offered alternative food sources to birds,” added Natalia.

“There is definitely new technology being developed in the UK and globally,” commented Natalia. “One example is the use of drones and for this purpose, the drones are made to look like a large bird – such as a bird of prey. They are fitted with a speaker that plays calls of this bird species, and the flight pattern of the drone is set to mimic that of a bird. I’ve heard that this is effective, and they don’t need to be used continuously as their effectiveness carries on after the flight – as the local bird populations think a new predator has set up a territory within the target field. This said, the use of drones as bird deterrents definitely needs more testing,” added Natalia.

“I’m not a fan of drones,” commented Tom, “as I have heard that the local bird population can be scared to the point of not returning. For us, using the three methods; nets, kites and the hawk eyes seem to keep the losses and damage from birds to a minimum.”

Vineyard space invaders are not limited to birds and while out scouting look out for creepy crawlies and larger creatures – ants, earwigs, wasps, deer, and badgers all have an eye on the grapes for their next meal.

“Wasps are technically a beneficial species in the broader environment, but they’re a nightmare if they get stuck into fruit, especially on tight bunches,” explained Emma. “I use traps positioned liberally near the edges of the vineyard, baited with a mixture of jam and cheap lemonade – the wasps can get in easily but out with difficulty. They definitely help.

“I’ve seen earwig induced rot in almost every site I’ve ever worked, where the bunch positioning has allowed it. Any time a bunch starts swelling around a wire, they’re particularly likely to get into it for shelter and food. Avoid letting bunches close around wires – just a little prod on the way past will normally be enough, if it looks to be a risk – and decent leaf stripping to reduce the arthropod-attracting shading. Fortunately, so far, I have never worked in a vineyard that’s had a significant moth or spotted-wing drosophila problem. However, scale can be problematic if it reaches intense levels. There’s basically no way to control it other than physically rubbing it off, ideally before they start hatching,” she added.

“Badgers and foxes both love fruit! Unfortunately, they tend to nibble at the bottom of a bunch and leave the rest – which is a good starting point for rot,”commented Emma. “It’s best to remove any damaged parts of bunches as soon as you see them. I know of a vineyard that left radios dotted around the vineyard edge near the badger setts – and played the World Service overnight. I have no idea how well it worked, but it’s an idea! Badger latrines are a risk all year round, but that’s to staff rather than vines.

“Cock pheasants can be incredibly territorial – I had one who would jump up and peck from behind whilst I was pruning!  He’d run alongside the tractor if we had the temerity to drive through his patch!“ Emma exclaimed.

“The trick to keep the pheasants from pecking up from underneath to reach the lower bunches, is to close the fruit zone netting on the bottom edge with clips!” Tom added.

In Emma’s view it’s best not to keep your vineyard site absolutely pristine. “Biodiversity will bring beneficial and predatory species which like a bit of untidiness and rotten wood. Whether they have eight legs or two wings, these habitats provide their bed and breakfast facilities.”

Many thanks to Natalia Zielonka, a PhD candidate at University of East Anglia, funded by BBSRC (Biological Sciences Research Council) and NRPDTP (The Norwich Research Park Biosciences Doctoral Training Partnership). 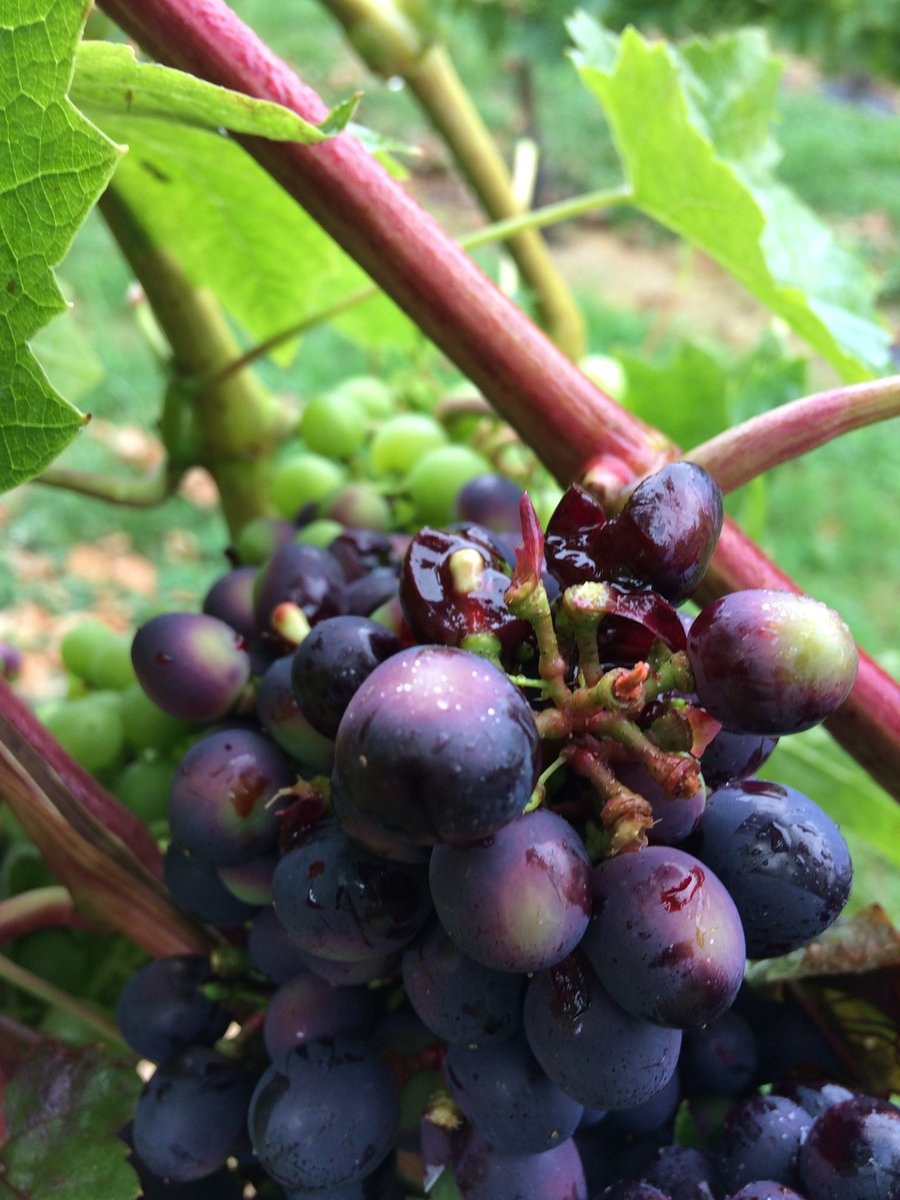 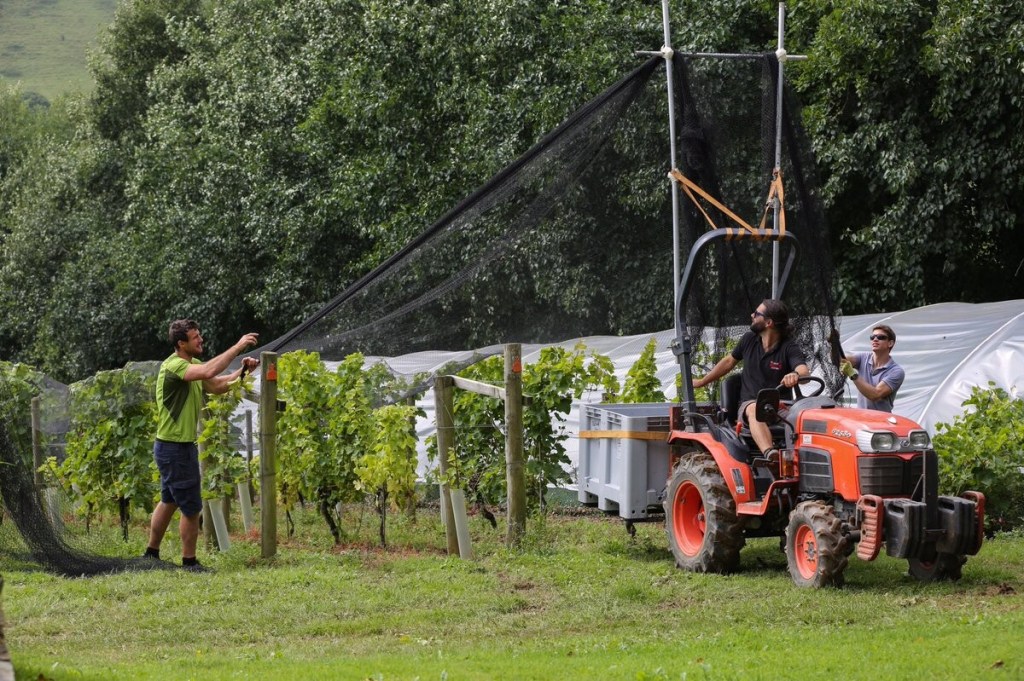 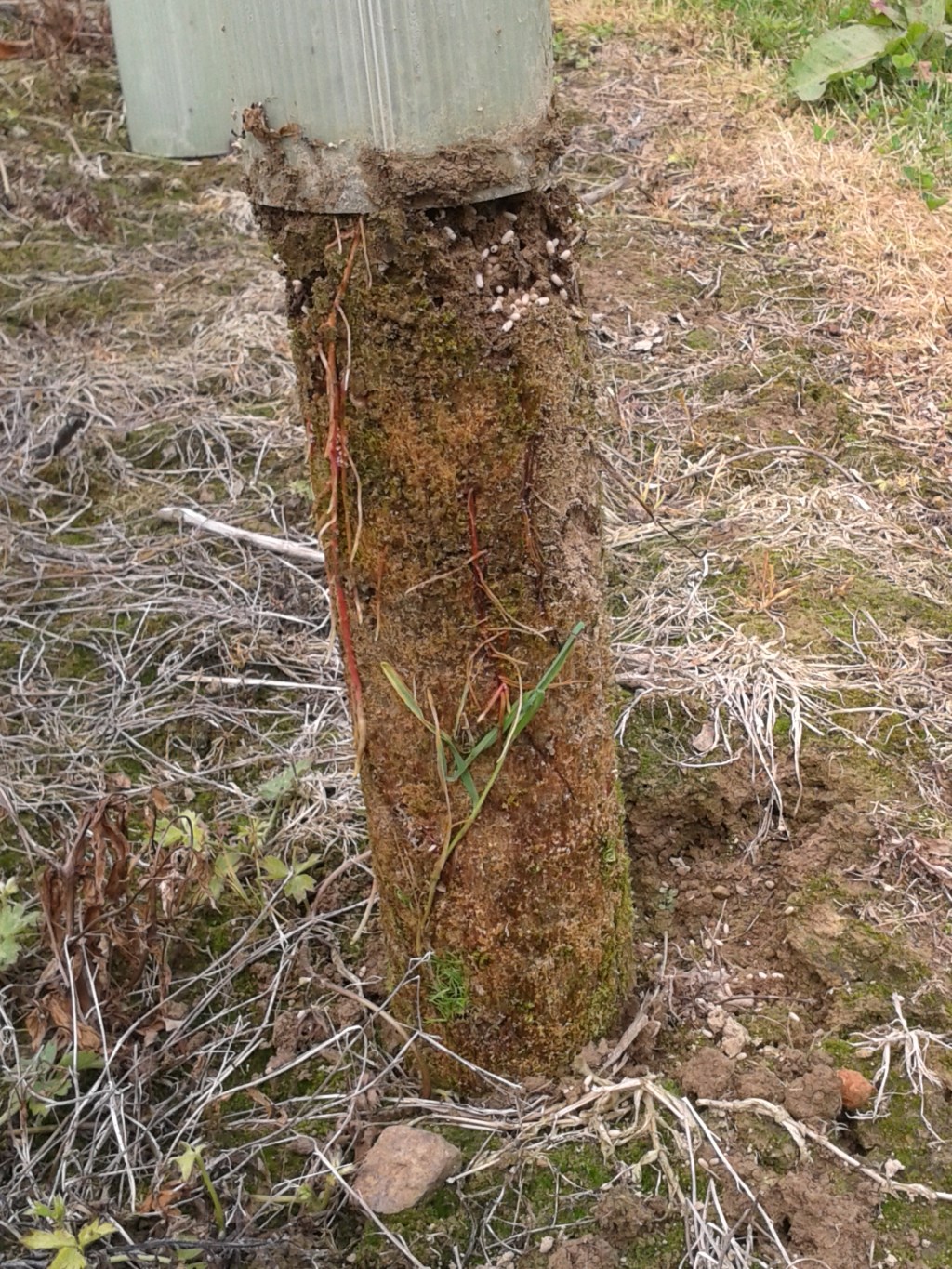 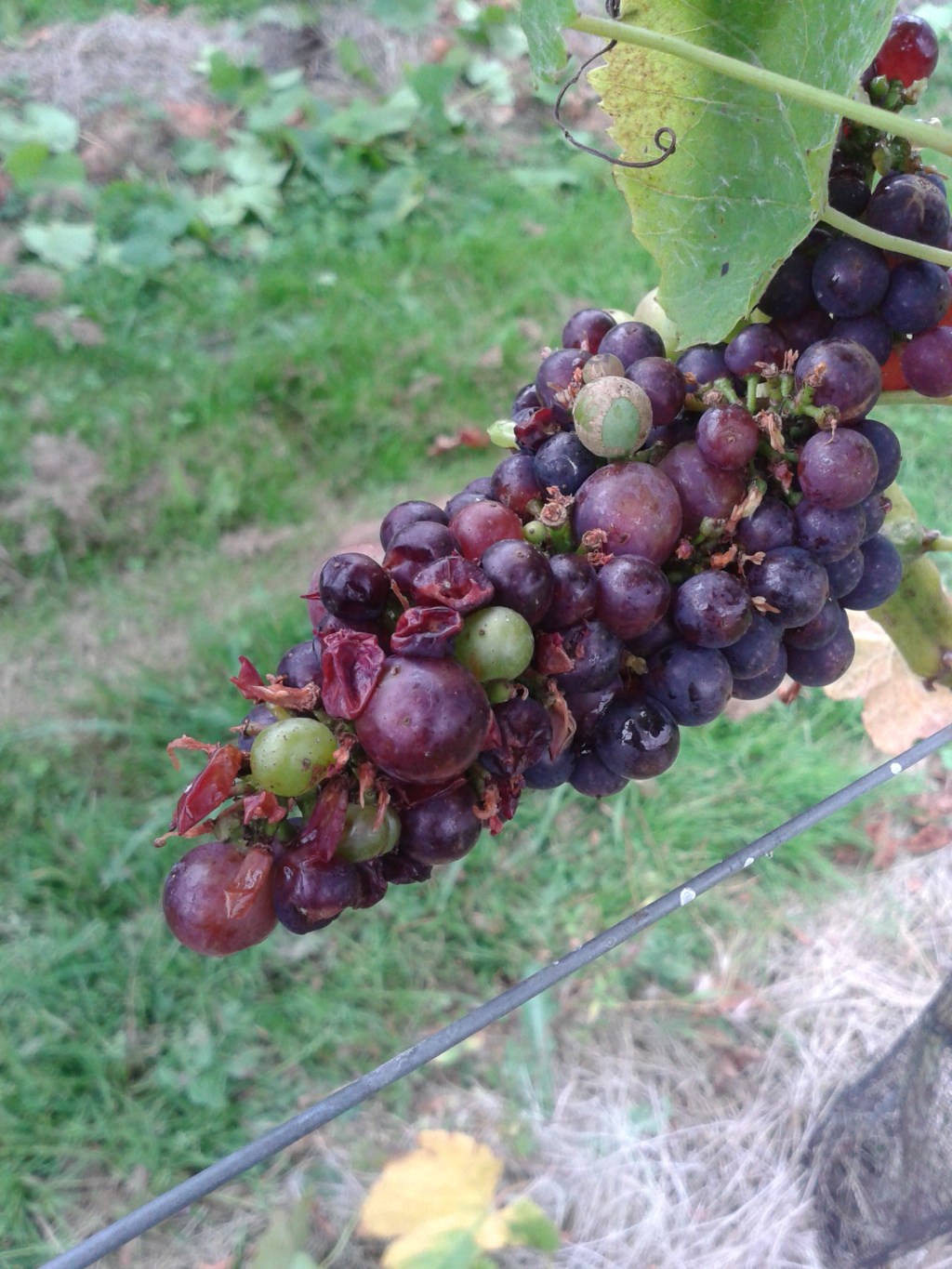 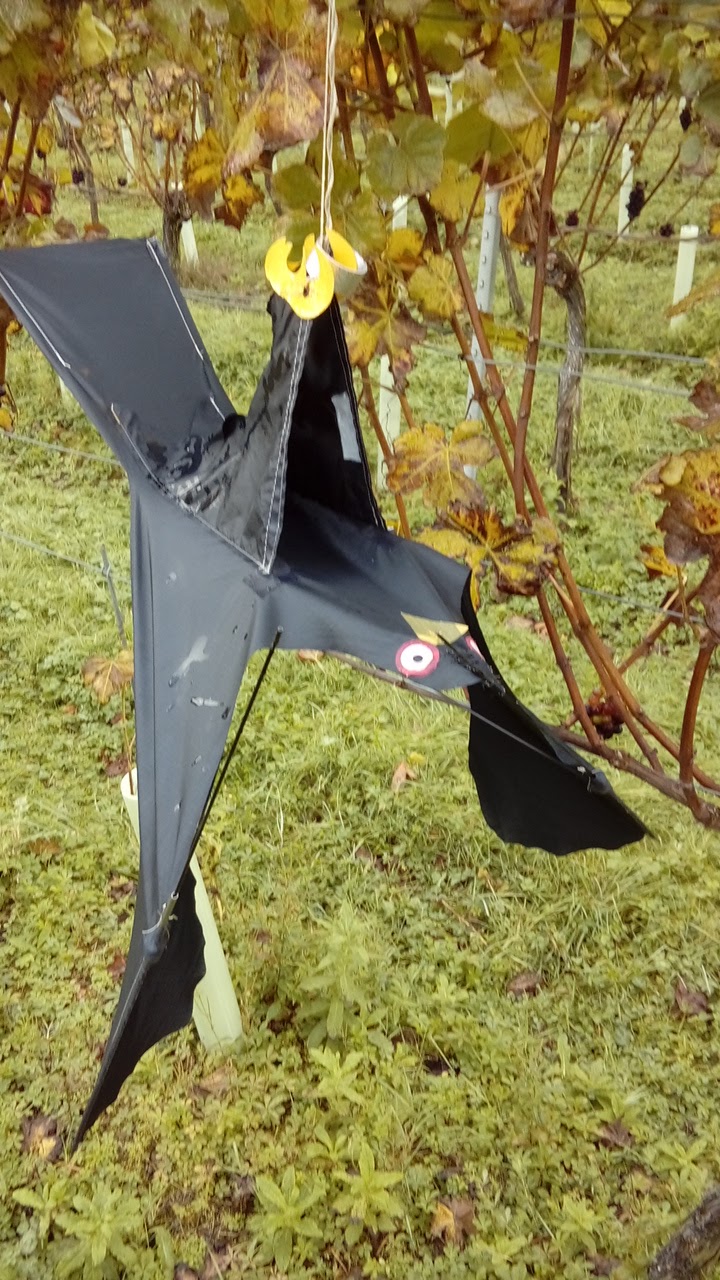 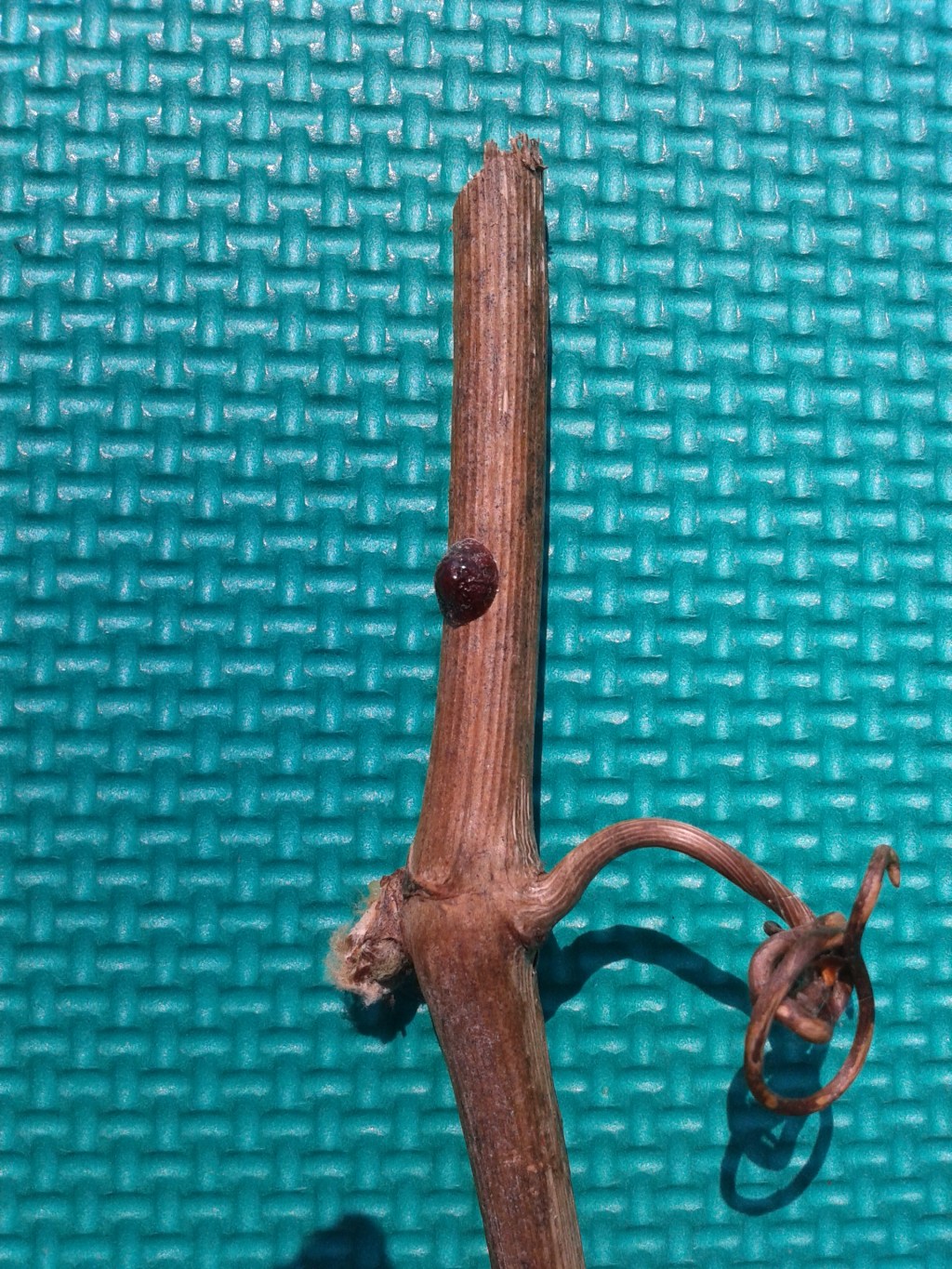 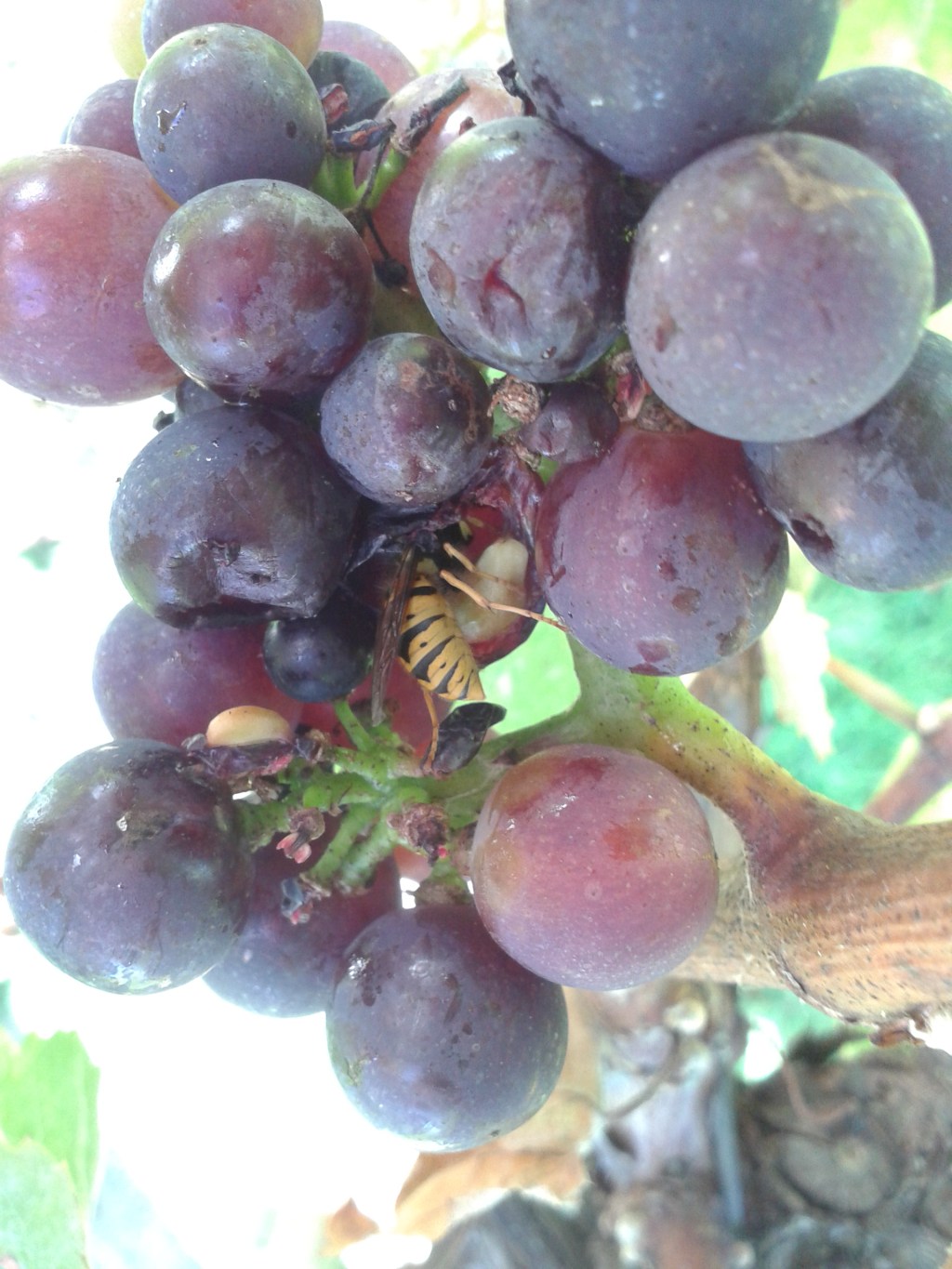 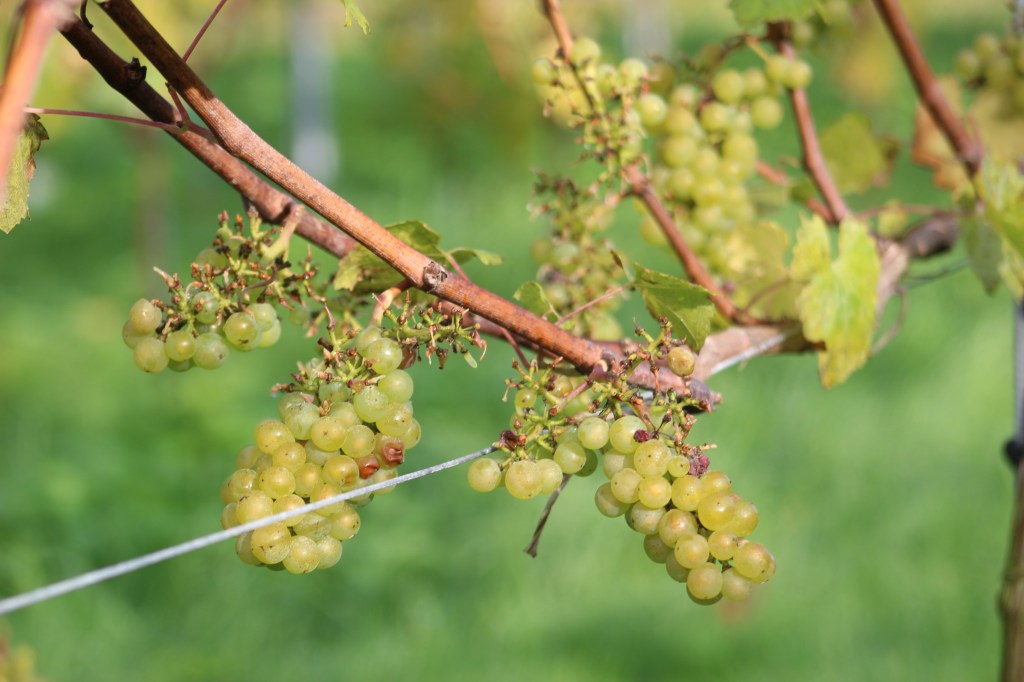