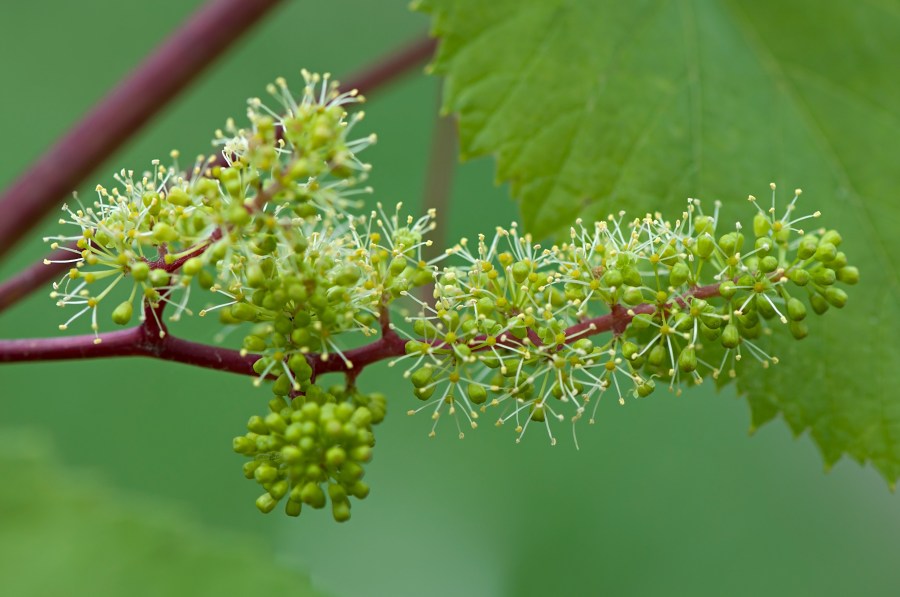 With flowering mostly complete and fruit now set, we are starting to build a clearer picture of what the coming grape harvest may hold.

Data shows growing conditions throughout the June flowering period were measurably sunnier and warmer than last year, but despite this, poor flower initiation and disappointing bud viability has been seen at some vineyards, notably in Chardonnay and Bacchus, although on the whole, bunch sizes look very good.

So what’s going on? The flowering process in vines is spread over two seasons, so the reduced flower numbers we are seeing in some situations now, is largely a consequence of the cloudy, wet and dull weather experienced between May and July last year, when parts of the south east recorded an inch of rain per week during that period.

Fruitful buds start forming in leaf axils (where the leaf stalk meets the growing shoot) around a year before vines flower, when cells at the tip of developing tissue form primordia – the name given to the organ or tissue when at its first recognisable stage of development.

Primordia will eventually develop into either an inflorescence or a tendril, depending on a range of factors, including the weather, the amount of photosynthate available to developing buds, and the vine’s nutritional status. The number of inflorescences within fruitful buds has largely been established once crops have reached véraison.

Variations in temperature and light levels around four to six weeks after full flowering are thought to have a particular impact on the balance of the plant hormones gibberellin (GA) and cytokinin, which are the main regulators of flowering and flower initiation. Generally, high temperatures and light levels stimulate the hormones needed to form flowers for the following season, as well as benefitting photosynthesis and carbohydrate availability to the plant.

So, for vines that were in full flower at the end of June, the period around late July will be the critical time that determines flower initiation for next year’s crop.

Of course, growers have no control over what the weather brings from one month to the next, especially in the UK, where we are already asking a lot by growing vines on the northernmost edge of their geographic range.

We can however stack the odds more in our favour, by ensuring canopies do not become overcrowded, thereby allowing good light penetration, and making sure vine nutrition is optimised throughout the season (both macro and micronutrients).

Careful cane selection can also help, as cane vigour affects bud fertility – hence the common advice to select canes of pencil-sized diameter to lay down for next season. A strong, healthy plant that can capture and utilise sunlight efficiently is key to a successful crop this season and next.

Hot, sunny summers may not be common in the UK, but when such conditions do occur, we sometimes hear talk of “Bacchus disorder”, where the exposed side of grapes turn brown and shrivel, with no apparent sign of any fungal pathogen.

The cause is often attributed to sunburn of young berries by strong ultraviolet light, which could potentially be a risk to any thin-skinned variety given the right conditions.

There are differing opinions as to how the risks should be managed, so care is needed and it is worth discussing the options with your agronomist if sunburn is a concern.

One strategy is to avoid de-leafing the side most exposed to the strongest midday sunlight until after the August bank holiday, by which time the sun’s energy will be declining. An alternative approach favoured by some, is to de-leaf and expose bunches immediately after flowering, allowing berries to build resistance to high UV levels as they develop.

Either option may have its merits, but it is probably best to avoid any ‘halfway house’ as exposing young berries to strong sunlight in early August before skins have hardened will inevitably increase the risk of sunburn.

If de-leafing had already started post-flowering, but practical issues delayed the work, it may be better to wait until the end of August to finish the job off, rather than exposing young berries while the sun is still relatively strong.