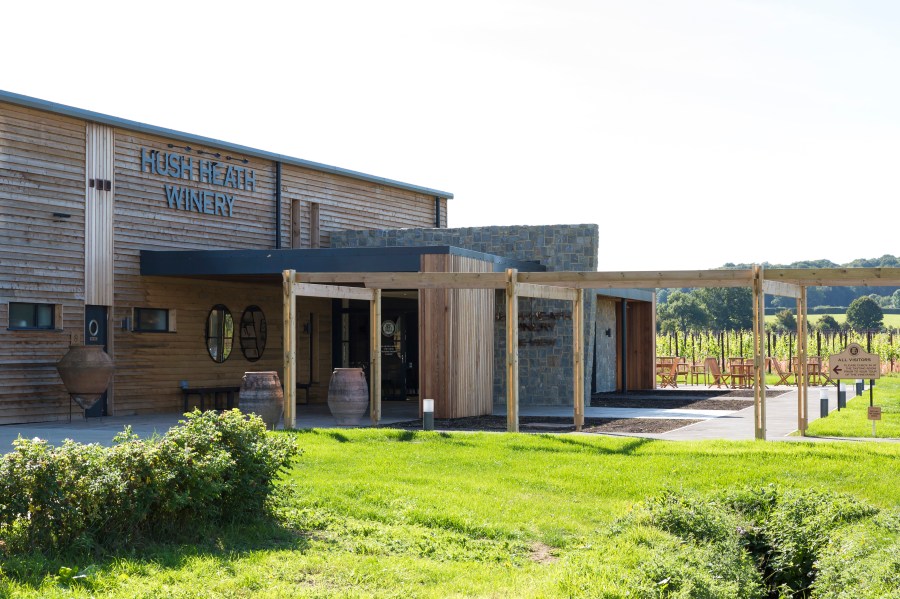 Meeting with Richard Balfour-Lynn on a sunny terrace at Hush Heath Estate, overlooking the flourishing, newly planted Nannette’s vineyard, sipping coffee from a mug inscribed “I’d rather be drinking Balfour Brut Rosé” I could easily have forgotten I was just outside Staplehurst, Kent.

The warm rays of the sun were complemented by a cooling breeze and, with the only sound in earshot being the gentle jazz piano music floating out of the tasting room door, it was probably the most tranquil start to a Monday morning and a stark contrast to the last time I met Richard for an article interview.

The 3 October 2017 was a blustery day and as work on the new winery and tasting room had only just started, Richard and I took our meeting in the marquee which had been erected as a new base from which the wine tourism experiences would be run.  As the wind howled around outside causing the metal posts to bang loudly together, Richard and I chatted about the growth plans for the estate, the increased capacity of the winery and the need to find a number of long-term contract grape growers to help facilitate this.

One year on and three established fruit growers are preparing to plant their vines in May 2019 to help fill the avant-garde winery extension and keep product flowing through the 200-seater tasting room, which were officially opened on Thursday 27 September 2018.

While the winery has been designed to increase the annual wine production at the family-run estate from 150,000 to 500,000 bottles per year, Richard has planned for this expansion to happen gradually over the next five years.

“As well as planting more vineyards at Hush Heath, we have agreed a number of long-term grower agreements with local fruit farmers to take our total acreage up to around 130 acres,” said Richard Balfour-Lynn, owner of Hush Heath. “This year 30-acres was planted here and from 2019 onwards we will look to plant around 30 to 40 acres per year with other growers under long-term agreements.”

Looking to the Champagne region for inspiration, Richard is hoping that this approach will allow Hush Heath to retain its charming boutique winery persona while meeting the ever increasing demand for quality English still and sparkling wines.

“If you look at the Champagne style, the big houses have growers which they have worked with for years,” said Richard. “They grow to desired specifications and that will be the same here. We are working with local farmers, who are experts in growing high-quality fruit and take pride in what they do.”
Strict criteria

Following the article which appeared in the November 2017 edition of South East Farmer, Hush Heath was approached by several people who were keen to establish vineyards, but with strict criteria in mind, just three growers were selected.

“In a number of instances, it was clear that the people who got in touch weren’t geared up to grow grapes,” said Richard. “The three farmers we have formed partnerships with are already well-established, first class fruit growers. Ben and Nigel Bardsley, Clive Baxter and Charles Highwood not only have excellent sites but the right expertise and existing equipment and machinery which will reduce the capital costs. They are also all within easy striking distance of the winery.”

As the journey to producing high quality wine starts in the vineyard, after reading the South East Farmer article and contacting Hush Heath, potential growers were subjected to a site visit to analyse the key elements, including soil type, aspect, total sunlight hours, frost and micro-climate records.

The potential contract growers not only needed to have sloped, south facing, well-sheltered, frost free sites, with well-draining soils and a history of successful fruit growing capabilities, but also the people themselves needed to be dedicated, knowledgeable and on-board with the Hush Heath ethos.

“The quality of the grapes is paramount to what we do,” said Richard. “We were looking for professional growers with a history of supplying high quality fruit to the top supermarkets. I needed to know that we would be working with people who take enormous pride in what they are doing. They are family businesses, as are we, so share similar values and philosophically it was a very good fit.”

As well as weighing up the investment costs of around £12,000 per acre, the potential growers went away to assess the labour and infrastructure resources available on their farms, and the timing of grape harvest in comparison to their other fruit crops.