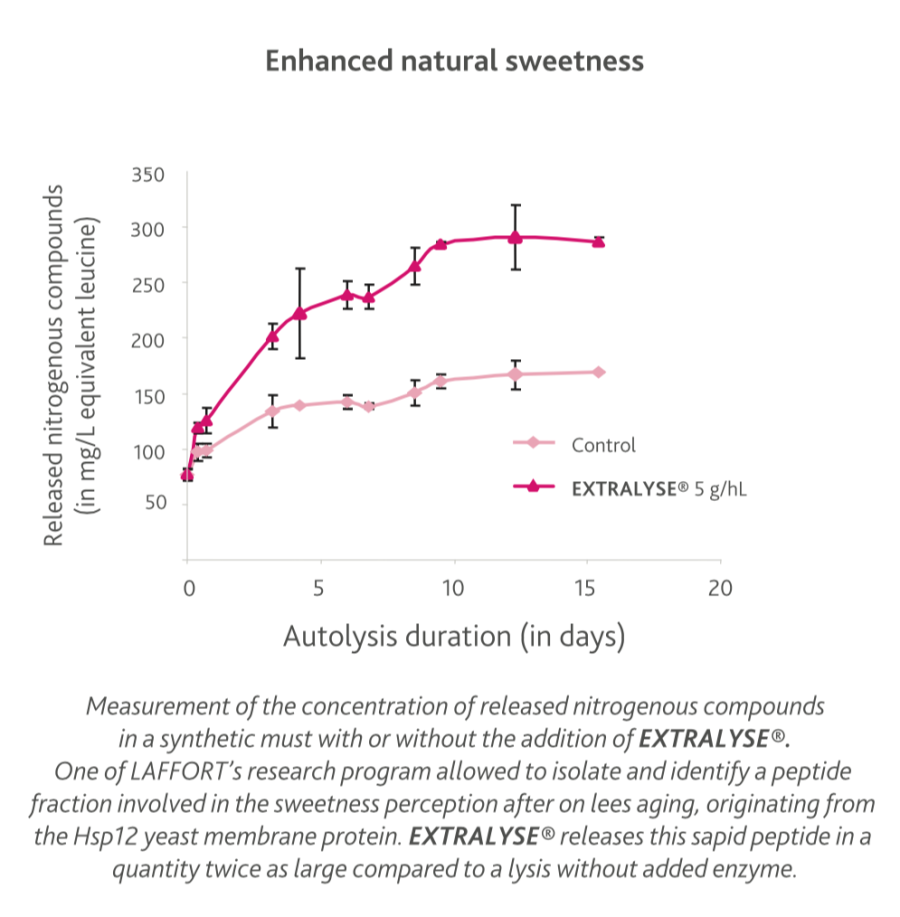 Enzymes are proteins which act as biological catalysts that facilitate and accelerate specific reactions and are useful tools during pre and post alcoholic fermentation. Post ferment enzymes, in particular glucanases enhance organoleptic attributes as well as improving stability and they aid filtration by minimising clogging compounds. Maryam Ehsani of Laffort explains further the role Extralyse can play during wine stabilisation.

ß-1,3 and ß-1,6-glucanases are enzymes extracted from the fungi Trichoderma harzianum and authorised for oenological treatments. They selectively degrade polysaccharides such as ß-(1,3 – 1,6)-glucans coming from the yeast cell envelope or produced by the mould Botritys cinerea.

The enzyme formulation of Extralyse, composed by pectinases and
ß-(1,3 – 1,6) glucanases, brings about a reduction in the molecular weight of wine polysaccharides (glucans, mannoproteins, proteins, peptides, pectins…) resulting in several oenological benefits for the optimisation and acceleration of vinification processes.

When Botrytis infects grape berries, it secretes a significant amount of branched long chain glucan molecules (ß 1,3-1,6 glucan) into the grape juice. This glucan has a very high molecular weight (more than 5,000 glucose units) and is responsible for very high viscosity. Wines produced from this grape juice will contain these long chain glucans, resulting in poor clarification and filtration.

Treatment of the wine with glucanase enzymes can reduce the glucan chain length and thus improve the wine’s aptitude to clarify and filter (Figure 1 and 2). An enzyme preparation known as Extralyse has been specifically developed for this application. A similar type of ß-(1,3 – 1,6) glucan secreted by Botrytis is found in yeast cell walls (yeasts are considered the simplest form of fungi). This glucan is liberated from the yeast during fermentation and while ageing on lees.

The release of glucans into the wine is accompanied by the release of various other wanted yeast compounds such as mannoproteins, amino acids, low molecular weight peptides and nucleotides, which can have a significant effect on wine mouthfeel. Pectinase/glucanase enzyme preparations such as Extralyse significantly enhance the yeast autolysis process and thus the release of these positive compounds.

Another beneficial aspect of Extralyse, as a positive secondary effect of a faster clarification, is a significant reduction of the general microbial load in the wine. In the case of contamination by spoilage microorganisms, such as acetic acid bacteria or Brettanomyces, a combined treatment of Extralyse and a fining agent, can help reduce the microbial load by up to 80%.

Autolysis enzymes are used to promote yeast autolysis during on lees aging. The key enzyme involved in these preparations is ß-glucanase, which targets glucans, a glucose polymer that is a principal component of yeast cell walls.

These enzymes can also be used to rectify poor wine filterability, especially if Botrytis was present in the fruit. Resulting wine viscosity is lowered and filterability proves with use of such enzyme formulation (Extralyse), which in wine production terms translates to fewer rackings, cleaner wine and easier filtration and bottling.