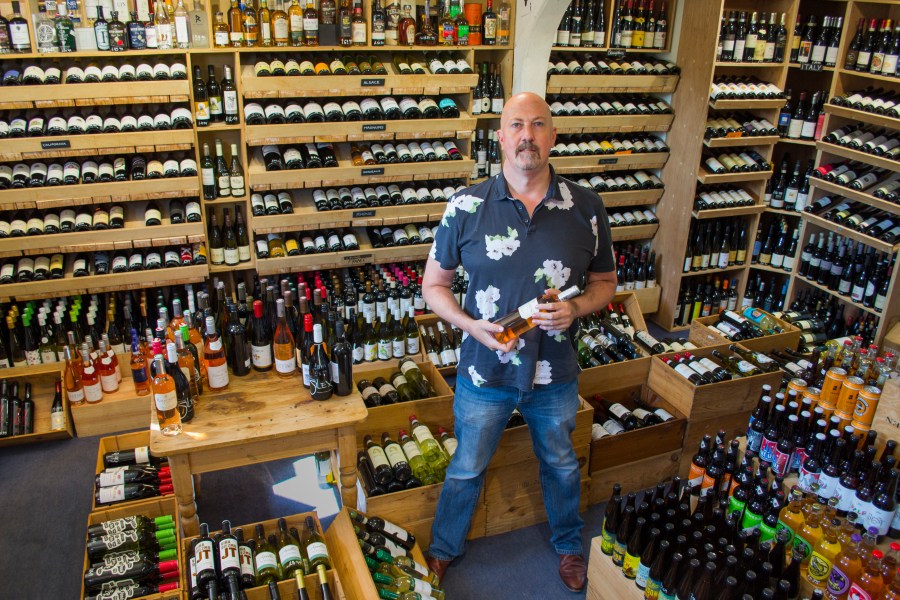 How has English wine changed as a category since you started working in the shop?

When my parents first started the business the wine selection was based around the then classics, France, Germany, Spain, Italy, Hungarian sweet wines and ports. I can’t say I remember a lot of English wines when I was small, but there must have been because I remember being dragged round vineyards; Breaky Bottom was great because it had pigs.

Later on, we bought bits and bobs, but I can’t say we fully committed to it. I would say the turning point began when we started stocking Ridgeview, pretty much from the start of the production. I’ve subsequently bought back vintages from private collections. We got on well with Mike Roberts, and the message seemed more interesting, which was all about making wines which would compete with wines from around the world. Other producers seemed to follow suit, at least I noticed them at that point; French varieties were being used, the wines were coming out a bit drier, and more modern. I’m generalising of course. We also helped host English wine festivals at Glynde Place and were heavily involved with promoting English wine at the Brighton and Hove Food Festival.

What was the first English, or Welsh, wine you tasted?

Not sure what the first one was, as I grew up with wine around the house, so I probably tasted something ancient from someone like Carr Taylor, or another old school vineyard. The first memorable moments were tasting the still wines from Peter Hall at Breaky Bottom. I remember tasting a large range of wines in the shop and I loved, and still do, the honesty, with each tasting the conversation was based around. “Is it tasting well today?” is an approach which should be used more often. We bought a bunch of wines and I remember them arriving in pristine white boxes with the Breaky Bottom logo on them.

How many English wines do Butler’s now stock and are you planning to grow this range over the next 12 months?

At a guess, about 60 different lines, excluding gins and beers. We did have a lot more but have culled some. We are not necessarily trying to increase the range, but we are definitely aiming at finessing it. We have really been behind English sparklers, we stock no big branded Champagnes and show English fizz at most tastings we host. But some of them have stuck, and not sold like some others do, so we are trying to create a more sensible offering.

What is the most memorable wine you have tasted?

I have tasted loads of memorable wines thankfully, but if I list them, then I look like a right ponce. I’m an enjoyer, so I make sure I have a lot of opportunity to taste potentially great things, which does not mean expensive necessarily, and it is the perk of a wine shop. Perhaps the common denominator is time and surprise. Some of my favourite wines have been wines with a bit of bottle age, they have developed levels of excitement and character, which perhaps they didn’t reveal when they first arrived. It is a rare occasion when we get to taste an English fizz, for example, but when you do it’s great, we always seem to be in a rush to consume things. I also think some of the best experiences happen when you aren’t looking for them. Like now, I found an unfinished bottle of Pieropan Soave, and a Heymann Lowenstein Schieferterrassen in the fridge, both always delicious (I was anticipating beer tonight) and Spotify has directed me to Charles Bradley, what a voice, I’m easily pleased!

What is your favourite part of finding new English wine suppliers?

I’m quite simple, we like people and if we get on with someone it tends to help. The team really get behind a message they believe in or trust. It’s nice finding surprises, which aren’t destined for supermarkets.

What is the most challenging part of finding new English/Welsh wine suppliers?

We sell nearly 2,000 different lines, which is complicated and we sometimes feel a bit guilty when we cannot take on a new contact. Throughout the last say twenty years, it’s been partly irrelevant how good your product is; if the packaging is wrong or isn’t clean, if there is very little stock, if it runs out and you don’t tell us, if it’s on offer at 25% off in a supermarket, if we have to collect, if it’s cheaper for our staff to buy it from the cellar door rather than at a staff discounted price from us… I’m not moaning, this applies to anything we buy. However nice it tastes, there has to be a business behind it.

How do you approach English wine ‘virgins’?

Taste the wine, do you like it? OK then we are good to go. We then use geography and make it local to them, and point out we were probably out with one of the winemaking teams at the weekend. We have a lot of wine producer friends in our locale, which I realise is a lot different to other parts of the country but it does make it easier to sell the wines. Our team all have their favourites, and wines they do not like! This is important, as it’s honest, transparent and gives you a chance to form a relationship. So, if someone tries Wiston and likes it but finds it too dry, we can give them something fruitier from Ridgeview, or go toasty with a Gusbourne, but this can only happen if the staff are engaged and the customer trusts them. I’m meandering now.

As an independent, when it comes to new listings, how much decision making comes down to figures and sales forecasts?

We don’t have enough time to over analyse, that’s our problem. We know straight away from the taste and price how things are likely to work. If it’s a tricky combination we might still take it on, but it needs more focus. The wine needs to taste good, be at the right price and have a story or an angle, and then we can get excited.

What is your favourite grape variety and why?

Nebbiolo because it’s for grown-ups, not babies, closely followed by Barbera. Nebbiolo is ethereal, sometimes a challenge, not liked by all, but I love it, in all shapes and forms. Barbera is my more indulgent, gentle ride, but I love how you can have bright, bracing red fruits in one bottle, chilled, then follow it with something dark, chocolatey and spicy, all from the same grape.

Should producers be focusing on developing the reputation of still wines?

We find English still wine a hard sell at the price, but would love access to more options. Good options, not just wines that have managed to get ripe and are looking good for one summer. We don’t get offered a lot to be honest, not sure why, and generally it starts at £15 per bottle. In one of our shops most customers want something punchy and tasty at £10. I understand all of the economies of scale, but we aren’t a charity, and we do need things to move.

It’s not my cup of tea, it might grab hold of a younger audience perhaps, but what’s the point, who is it aimed at? If it’s Prosecco drinkers, then it won’t be cheap enough, and why would they buy it? If it’s a touch cheaper than Champagne method sparkling, then why not pay a bit more and have something better?

How can producers better engage with independent retailers to help increase sales of English wines?

Same as producers from any other country, work out how they can best work with us, support us, then we sell more, and everyone is happy. Don’t sell to our competition, that helps. I’m not being revelatory here, but we are all in it together, so let’s work out how to make it work. I’m sounding negative, so here’s a positive. We have been working with Rathfinny, and I must say from our end it has been exemplary. They showed us the product and set up, the pricing is clear, the route to market was very open. We have had great communication about available stock, they don’t try and sell directly to restaurants we supply, they come and train the teams where we sell it. We need to sell the wine to make it worthwhile of course, but we feel they are working with us to achieve this.

Have you noticed an increase in the number of customers seeking out English wines?

The big difference is that more people are buying English wines to drink, rather than to give to their French mate as a gift, this is a big turning point for us on the front line. There is also a shift from people buying sparkling wine as a special gift, to customers drinking it because they like it. This helps legitimise wine, instead of it being a novelty.

Do you think it is going to become more challenging for English producers to stand out in a crowded market?

Openness and transparency works best, whoever you are. If a producer’s pricing structure requires supermarket volumes, then that’s fine sell to supermarkets and don’t muddy the water with independents. All wines are sharpening presentation, PR, marketing, so why wouldn’t English wines. A thought-out pricing structure helps too, so we can be competitive when wholesaling.

Shelf appeal or stories and accolades?

It seems to me everyone has won a gold somewhere, which is helpful for about two minutes, but our love for people and producer far outweighs anything else.

What do you think is the biggest issue facing the UK wine industry at the moment?

If you weren’t working in wine what would you be doing?

Scoring a load of goals for Liverpool FC, but I’m too old and my feet ache.

I will be watching Liverpool FC score a load of goals and win the Premiership, while I drink great wines, eat crab, and balance it all out with heartburn drugs. And, Tom Surgey, I’ll still be beating you at our Battle of the Bottle events, even if you have to wheel me in!