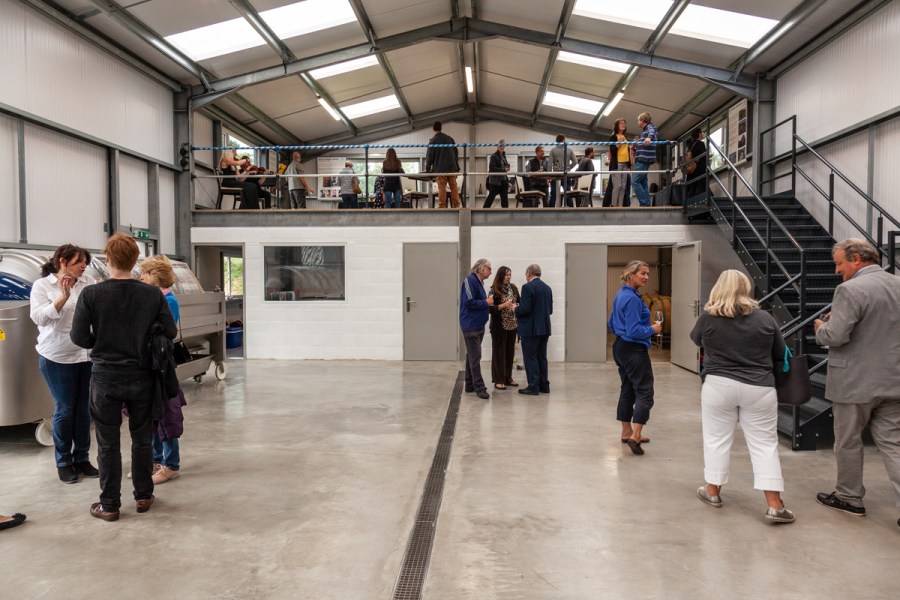 East Sussex based vineyard Hidden Spring celebrated a major investment in the future of its English wines as it opened its new winery in time for the first harvest of its newly planted vines.

The vineyard at Horam was originally planted in 1986 and ran successfully as a commercial vineyard for over 20 years. It was then converted to a campsite and lay fallow until 2015, when it was re-established by new owners David McNally and Chris Phipps who have completely replanted the vineyard with 13 acres of new vines.

“Initially we dedicated all our time to restoring the site because it had been neglected and a lot of the infrastructure was worn out,” said David McNally, winemaker at Hidden Spring. “In 2016 we planted Bacchus, Chardonnay, Pinot meunier, Pinot noir and 3,000 vines of Pinot gris.”

In 2017, David engaged a consultant and visited a dozen wineries in the UK, to gain a good sense of the range of styles, layouts and quality, before designing a winery to his exact specifications.

Designed to handle a target production of around 25,000 bottles each year, the winery is equipped with a 3.4-tonne Europress from Scharfenberger, and 33,000 litres of tank capacity, spread across a mixture of variable and fixed capacity tanks, ranging from 1,000-litre to 4,000-litres. There are also four 300-litre French oak barrels and David is already planning to invest in another four.

“We do barrel ferment a proportion of our Bacchus, just around 10%, to add a creamy texture,” said David. “In terms of winemaking, to begin with, we will be keeping things very vanilla. There is a lot of complexity going on this year and we just want to get through this harvest without over complicating things for ourselves.”

To date, Hidden Spring have been sourcing fruit from other growers and working with consultant and contract winemaker Ulrich Hoffman, at Hoffman and Rathbone, to produce a sparkling, which has not yet been released, and two award-winning still wines; Vine Cross 2015, a blend of Bacchus and Reichensteiner, and a single varietal Bacchus, 2017.

“As well as operating in our new winery, we’re also harvesting our debut crop from the site, so it is a big transition year,” said David. “We were very hands on with the winemaking process before, and Ulrich Hoffman has been very helpful, either being here in person to see the fruit come in or at the end of a phone. It is quite an exciting time and we couldn’t be more pleased with the quality of the fruit coming in.”

The winery will also become part of the visitor experience which David and Chris are very focused on for the future. Guests can already participate in a range of activities including music evenings, wine dinners, tutored tastings in the dedicated visitor centre and guided tours of the vineyard.