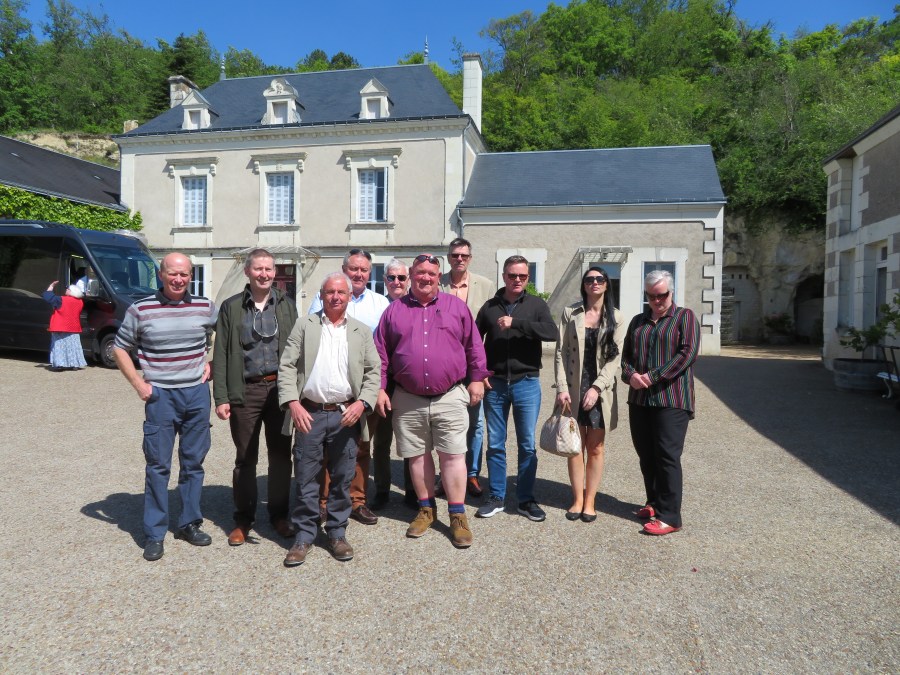 On a beautiful Sunday afternoon in May, 11 intrepid members of the Welsh Vineyards Association (WVA) boarded a nineteen-seater coach and headed to Portsmouth to catch the overnight ferry to Caen in Normandy for the first leg of their study tour to the Loire region of France.

It was an early call on Monday morning as the ferry docked at 5.30am (6.30am in France) and soon we were on our way south. By late morning we had reached the wine region of Chinon, near Saumur, where Robb Merchant, chairman of the WVA, assisted by Gilbert Viader (a French owner of a Welsh vineyard) had arranged for us to visit Bernard Baudry Vineyard. We were joined there by Chris Beech and his wife, who had moved to Chinon following Chris’ retirement from medicine in Newport.

The team at Bernard Baudry made us very welcome and we were soon in the tasting room learning about the wines they produce. Their winemaker explained about the key vine varieties grown, Chenin blanc and Cabernet franc, as well as the different soils in the various parts of their vineyards, which included sandy gravel in the Vienne valley, limestone on the slopes, and clay and sand in the plateau area. Different wines are produced from these areas, of which we were able to taste the differences for ourselves. After the tastings, we headed to the ‘cave’ to see the barrels and were given a barrel sample of a Cabernet franc.

The climate in the area is semi-oceanic and we were surprised to see that the vines were no more advanced than ours in Wales. The flowering trees and shrubs growing in the area were also at the same stage as ours, with blossom on the lilacs, laburnhams and paulownias and hawthorns flowering in the hedgerows.

After a meal made of locally sourced ingredients accompanied by local Chinon wines, it was back to the coach to continue our journey to Sancerre, where we were to stay the night. As we neared Sancerre, the countryside changed from meadows and woodland to vineyards as far as the eye could see. The hilltop town of Sancerre came in to view, surrounded by vineyards right up to the town walls.

As we approached, the sun was going down after a beautiful day and we climbed up the steep road into the town, nearly getting the coach stuck as we tried to turn up a very narrow street. We settled in to our rooms and then met up for a walk around the town and viewed the Loire Valley from a nearby viewpoint. Then it was time for an evening meal and a chance to try some of the Sancerre wines.

The varieties grown in the Sancerre appellation are Sauvignon blanc, for which it is justly famous and Pinot noir which makes a light red and a rosé. The climate is continental as Sancerre is about 300 miles from the sea, which means the winters can be cold and there was a chilly breeze when we were there in May; in fact, it felt colder than at home in Wales. The soil is mostly chalky, similar to the Champagne region, with many of the vines grown as single guyots and quite low.

Tuesday morning dawned bright and sunny again although the chill breeze was still with us. We boarded the coach for a journey to the appellation of Quincy, another of the Centre-Loire regions. The owners of Brinay were keen to tell us of all the things they have been doing in their area. We visited their vineyards and discussed the vines and their style of planting. The rows were spaced at 1.3metres with the vines a metre apart. Again, the vines were low, and we wondered about how bad the back ache would be after a day’s work.

The team actually do a lot of the work by machine and when we were there, several small (but high) tractors were straddling the rows, cultivating beneath the vines and they also harvest using machines. The interesting thing was that there were six vineyard owners who had formed a group which owned the equipment. This was stored in a central depot which all six members of the cooperative had access to.

The group had also got together to fund the cost of installing diesel powered windmills to keep the frost off. Each windmill would keep five hectares frost free. There were weather stations strategically placed around the vineyards and everyone had an app on their phones which warned them when frost was likely and when to set the fans going. Frost can be a big problem with dips and rises in the terrain also causing frost pockets. Another regular and damaging problem in the area is hail. We were shown some ‘cloud busters’, gas guns which shoot a blast of hot air into the clouds every seven seconds causing the clouds to drop rain instead of hail.

After a tour of the Brinay vineyards in the coach, we were taken to a very nice local restaurant for lunch accompanied of course by Quincy wines. The only grape variety allowed to be grown in the appellation is Sauvignon blanc and they certainly produce some good ones.

Jean Charles and his son Etienne who were showing us round then took us to see the winery which again was a shared concern, with all the big machinery such as presses and bottling line jointly owned. Each vineyard owned their own tanks so there were a variety of different types to see. Many were fibre glass but there were also stainless steel and a concrete egg.

Then it was into the tasting room to try the wines. As well as the Sauvignon blancs from Quincy, we were also able to try some Pinot noir reds and a rosé made with Pinot gris which they grow in a different appellation called Reuilly. The cooperation between the vineyards was very interesting and seemed to work well although they admitted that there were a few problems at the start.

We then travelled through some lovely French countryside on beautifully smooth roads, back to our hotel in Sancerre and another evening meal with Sancerre wines. Wednesday was another early start as we needed to catch the 2pm ferry at Caen. After a 6-hour crossing we were back at Portsmouth and continued our journey to Wales, arriving at White Castle Vineyard about 11.30pm.

It was a very busy and rather tiring study tour but was enjoyed by all and everyone learnt something new. Thanks to Robb Merchant for organising and to Gilbert Viader who assisted him and also did a great job at translating for us when needed (which was quite frequently, especially at meal times). We would also like to thank the Welsh Government Drinks Cluster for part funding our tour and a mention must also be made of Andy, our driver, who told many a tall and interesting tale and kept us amused throughout the journey and got us to the ferry on time.