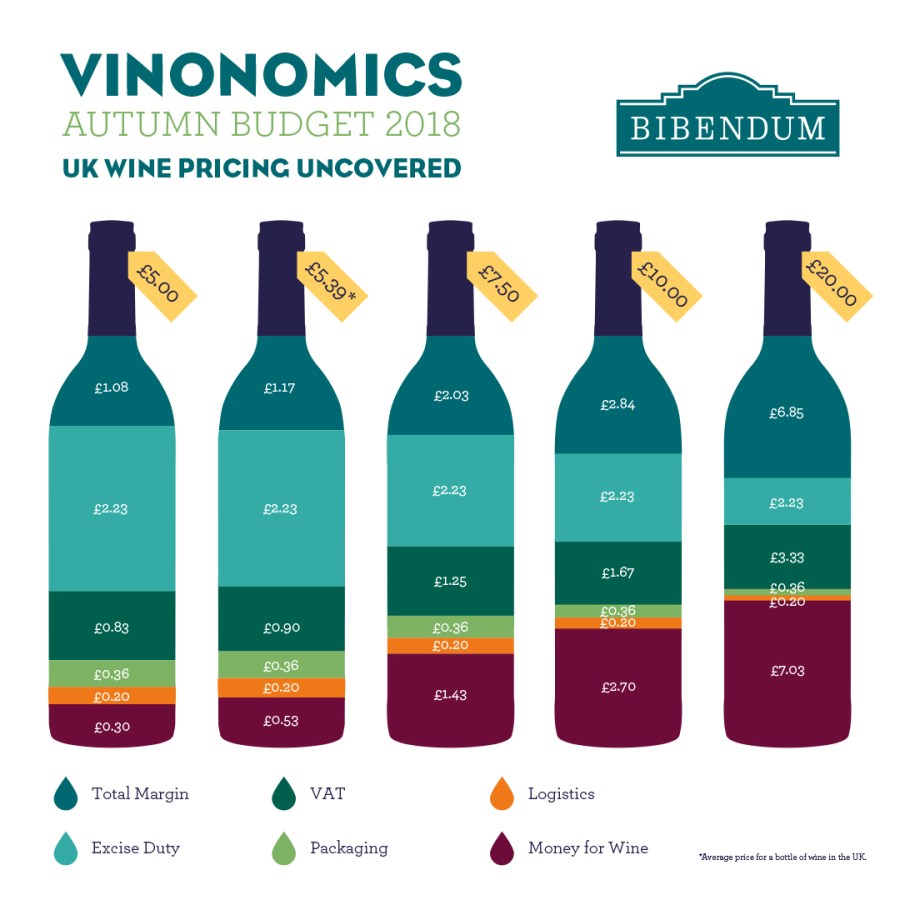 The UK wine industry took a huge hit in the 2018 autumn budget as Philip Hammond, the chancellor confirmed that wine duty will rise in line with inflation on 1 February 2019.

The forecast 3.1% tax hike is an unwelcome decision which will see tax on a bottle of still wine increase 7p to £2.23, and sparkling wine by 9p to £2.86. These figures do not include VAT which adds a further 20%.

Disheartened by the announcement, chairman of Wines of Great Britain (WineGB), and owner of Hattingley Valley, Simon Robinson said: “We are very disappointed that the chancellor is not supporting one of the UK’s fastest growing industries and providing a reduction in duties on English and Welsh wine, which are already some of the highest in Europe. As an industry that will see between 20,000 to 30,000 new jobs created in the rural economy over the next decade, support for this fledgling industry is very important to ensure it can achieve its potential.”

There is however some positive news for English and Welsh wine producers, as from 1 April 2020, change in legislation will see duty for British wines made from concentrate calculated on the finished product volume. This decision to prohibit post duty dilution has been welcomed by the membership organisation, with Simon stating that: “This was an issue which was of concern to a number of our members and the chancellor’s decision helps to create a fair and level playing field.”

In light of the 2018 autumn budget, the Wine and Spirit Trade Association (WSTA) is warning that wine businesses, already facing a tough trading landscape thanks to Brexit, will struggle to bear the brunt.

“The decision by the chancellor to increase wine rates significantly is a hammer blow to this great British industry,” said Miles Beale, chief executive of WSTA. “It actively undermines a sector that has been hardest hit since the Brexit referendum and will be thoroughly unwelcome for the 33 million consumers of the nation’s most popular alcoholic drink. This inflationary rise is grossly unfair, unjustified and counter-productive. The UK is one of the world’s biggest wine trading nations and deserves government’s support, not punishment.”

To add insult to injury, Mr Hammond announced that he would be freezing the duty rate for beer, cider (excluding sparkling cider above 5.5% abv) and spirits.

“The wine industry is, unfortunately, no stranger to harsh treatment from chancellors,” said Miles. “Since 2012 wine overtook beer as the largest contributor to the public purse through duty payments, and no alcoholic drink has paid more to the treasury since then.”

Despite employing some 190,000 people across the UK, the duty rate for wine has only been frozen twice since 2003 and it remains greedily high compared to other major wine regions across the globe.

“It forces British businesses to compete on an ever more uneven playing field, which is grossly unhelpful particularly when final preparations are being made to leave the EU potentially without a deal,” said Miles. “By increasing the UK’s already excessive duty rates the chancellor will clobber wine importing businesses, including thousands of SMEs; stifle growth of our flourishing English wine industry and raise prices for consumers.”

The increase also goes against figures which show that after a freeze in wine duty between February to August 2018, wine duty income increased by £39 million, up 2% on the same time last year.

“This Budget represents a missed opportunity,” said Miles. “It ignores the evidence that treasury coffers actually increase following a freeze in wine duty and suggests the chancellor has closed himself off to the concerns of our industry and is wildly out of touch with British consumers. The failure to rebalance this unfair tax burden on the wine industry will stifle businesses ability to invest and grow, and will damage the sector which last year brought in almost £19 billion in economic activity.

Vineyard Magazine contacted Mr Hammond’s office multiple times to find out why wine was singled out and why nothing is being done to help support our burgeoning domestic viticulture and winemaking sectors, however, at the time of going to press no response had been received.

Following the budget announcement, for the tenth year running drink supplier Bibendum Wine has released its new ‘Vinonomics’ infographic (see below) to highlight to consumers that the more they spend on a bottle, the greater the value of the wine they will be drinking. When it comes to the £20 bottle of wine, despite it being four times the price of a £5 bottle, the quality of the wine increases 23 times.