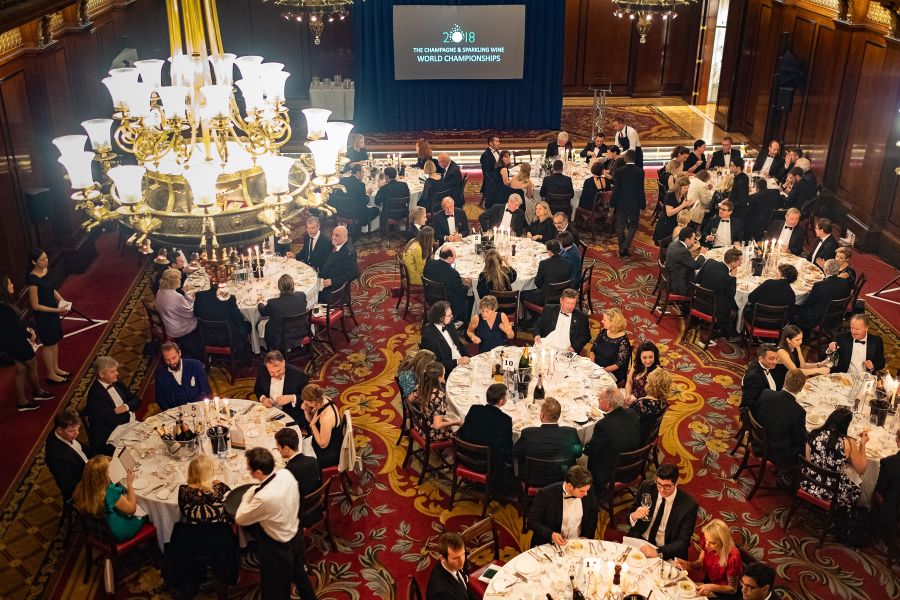 The roof was raised at the 2018 Champagne and Sparkling Wine World Championships (CSWWC) awards dinner on 24 October as Royal Warrant holders Camel Valley were presented with the trophy for Best English Sparkling Wine for its 2015 Pinot Noir Rosé Brut.

It is the fifth consecutive year that the Cornish wine producer has won gold in the CSWWC and the 2015 Pinot Noir Rosé Brut has also scooped platinum at the Decanter World Wine Awards, gold in the International Wine Challenge, and gold and trophy in the WineGB Awards.

“We are delighted that our son Sam and his hard-working team have won the national trophy, for this remarkable wine,’’ said Bob Lindo, who along with his wife Annie, founded Camel Valley Vineyard, in Bodmin, Cornwall.

Other English sparkling wines from Cottonworth, Denbies Wine Estate, Fox and Fox, Gusbourne Estate and Plumpton Estate were also presented with Best in Class awards on the night.

“We have been really impressed by the standard of entries this year,” said CSWWC founder and head judge Tom Stevenson. “The bar was set high from day one and the medal count certainly reflects this. We were delighted to see Camel Valley’s Pinot Noir Rosé crowned the best English sparkling wine.”

East Sussex’s Plumpton College also had a very successful evening, as the estate’s NV Brut Rosé retained its title of the Best in Class English Rosé NV. Produced by students, the wine is made from Pinot noir grown entirely at the college’s vineyards.

Commenting on Plumpton’s achievements, Tom Stevenson remarked that: “While other wine schools around the globe make and sell their own wines as part of the hands-on teaching process, few manage to win gold medals with their efforts, let alone Best in Class.”

Surrey’s Denbies Wine Estate, which was featured in Vineyard magazine last month (October 2018), was also thrilled to have been recognised as the Best English Blanc de Noirs for its 2013 Cubitt Blanc de Noirs.

“2013 was the first release of this particular sparkling wine,” said Chris White, CEO at Denbies. “The greater acreage of Pinot noir on the estate has enabled us to produce a wider range of different sparkling wines. Right now, it is a very exciting time for us at Denbies and like many other producers, 2018 has been a record-breaking year with near perfect growing conditions and top-quality fruit in abundance.”

With an increased number of entries from the UK, 2018 was also a ground-breaking year for the Champagne and Sparkling Wine World Championships, one of the most respected, comprehensive and rigorous international sparkling wine competitions in the world. Across the global competition, a total of 25 trophy winners were selected out of the 68 Best in Class winners. These included nine national champions, seven world champions by style and the chairman’s trophy, which was presented this year to Dominique Demarville, Chef de Caves of Veuve Clicquot.