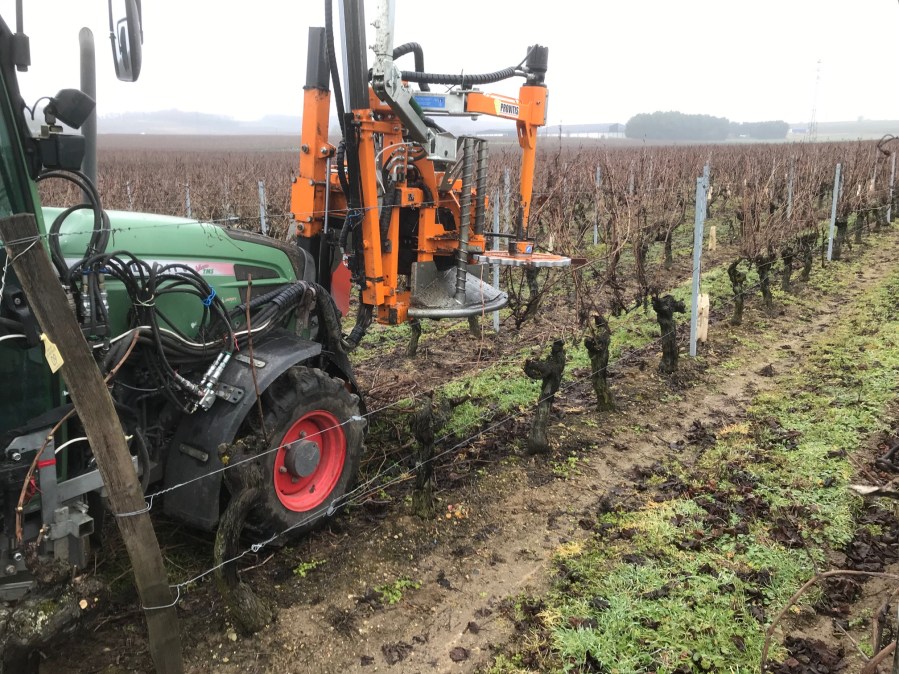 In pursuit of a super economical way to pull out canes after pruning, Vitifruit Equipment took a group of growers to see a machine at work in France.

After flying to Nantes and driving to Saumur on the Loire we arrived at the vineyard of Jean-Yves who has parcels of vines either side of the Abbey de Fontevraud wherein lie the remains of the pre-Brexit Kings who ruled from the borders of Scotland to the borders of Spain, Henry II and Richard the Lionheart, who presumably also appreciated the local wines and food as much as our English colleagues.

Jean-Yves is a supremely practical man and conceived the idea of a cane puller many years ago, so he took the idea to Provitis who refined it and put it into commercial production. His own machine has covered many hectares in the last eight years and proven very reliable.

After initial pruning he and his worker are able to pull out and mulch between three to four hectares a day; our English colleagues were more than impressed with that. The quality of work was of the highest standard and he even made a super job of simultaneously mulching the prunings.

We saw that the process is first to prune, then drop or raise the movable wires in order to allow clear passage for the machine, then take it to work. Do not wrap the vine around the wire when tying down and to use an electric tying tool, like the Zanon, to make pulling out easier.

As the machine is obviously a tool for the future, Vitifruit Equipment now has one for demonstrations and hire, and thanks to the generosity of the vineyard managers who went on the trip, demonstration days will be taking place in November in their vineyards.

The machine from Provitis uses a common front mounted mast to control and position the cane puller which is also the same mast onto which other tools can be mounted, such as the vine trimmer, de-leafer, bud rubber, lifting and tying machine and pre-pruner.

For the future, Provitis are almost at the point of producing another type of cane puller to be used in conjunction with their lifting and tying machine, PA 5000, where no manual summer cane lifting or movable wires are required. In this system all the wires are fixed and the summer growth is held up by string paid out by the PA 5000. Two of these machines are already working in the UK in conventional trellising. More details and  videos are available on www.viticulture-provitis.eu