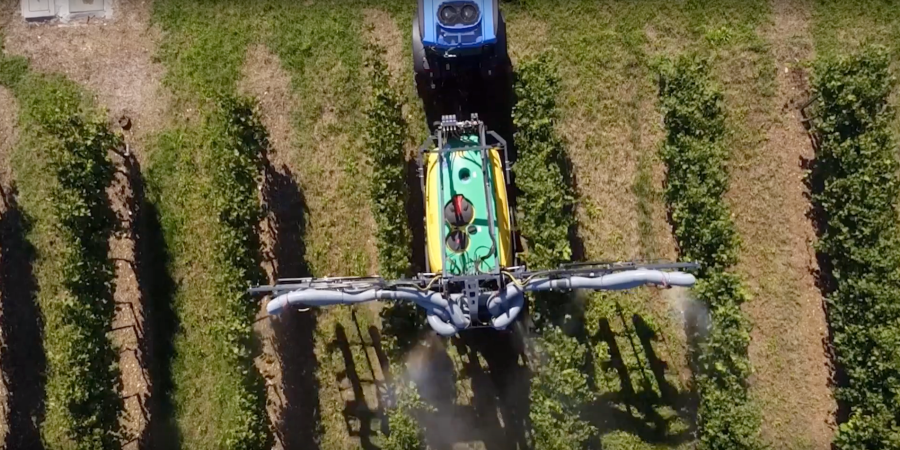 Ready for the start of the 2019 spray season, Chapel Down has recently invested in four Booster Rafal sprayers from Italian manufacturer Caffini.

Supplied in the UK by Lamberhurst Engineering, the Caffini brand is not a new name on the global sprayer market, having been founded in 1924. Thousands of units are sold each year into major wine growing regions across the world; yet very few are seen within our shores and Luke Wolfe, vineyard operations manager at Chapel Down, believes they are being unintentionally overlooked by fellow growers.

“When I joined Chapel Down, we had four or five sprayers and they were all different makes and models,” said Luke. “It was the first time I had come across Caffini and really liked the range because they are so simple but do an incredible job. Over the years we have phased out the other makes and now only use Caffini sprayers across our sites.”

While the six-sided sprayer, which is capable of spraying two rows and two half rows simultaneously, requires a confident, competent tractor driver, the machines themselves are relatively straight forward to use, easy to maintain and, in the rare event of a breakdown, even the most inexperienced operator could “fix it enough to get through the spray round”.

According to Luke, all Caffini sprayers also benefit from extremely powerful fan units which allows for effective coverage and penetrate even into the thickest of canopies. While there is always a danger with multiple row sprayers that the arms furthest away will lack power, since the team started using the Rafal, Chapel Down is finding that the rows are 100% consistent, which is vital when farming on their scale.

The sprayers have also proven to use less water and the ability to tackle multiple rows at once not only helps to keep labour costs to a minimum but also ensures that vineyards can be sprayed in the right window, leaving plenty of time to wash down and maintain the equipment properly afterwards.

“It is not just about intelligent time management; spraying in the UK can be really difficult,” said Luke. “Last year the weather was perfect and spraying was a doddle, but we are in a cool, marginal, maritime climate and there will be seasons, like 2015, where there might only be one spray window in a two week period. With that in mind, the Rafal sprayer allows us to cover between 3.5 to 3.7 hectares in an hour and a half.”

Having made an “incredible investment” into sprayers to ensure that even Chapel Down’s biggest sites can be finished in an eight-hour day, Luke can now be more selective when the team go out and is not pressured as much by the UK’s challenging climate.