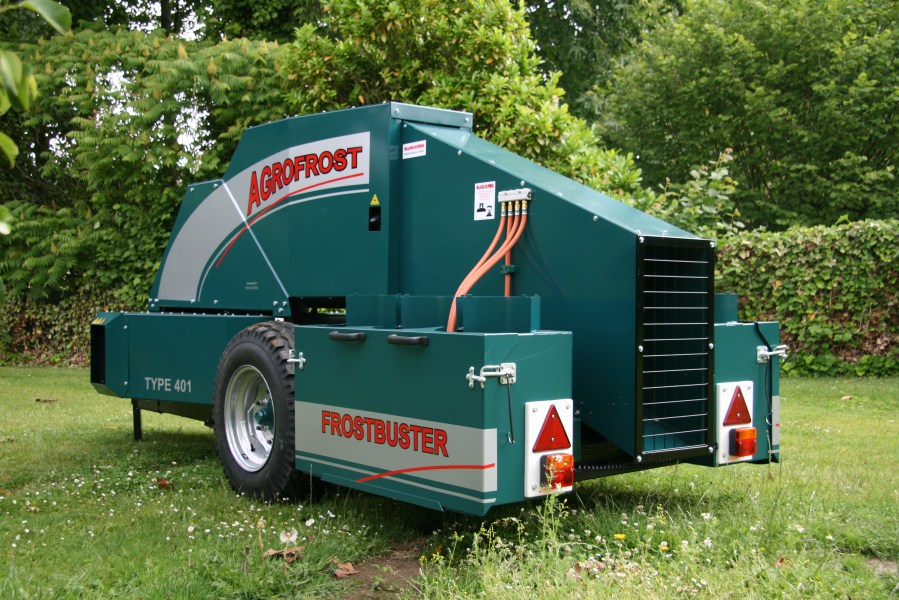 Frost protection systems and the technology behind them are not new. Indeed Agrofrost has been producing its machines since 2001, with the number of machines sold per year now exceeding 500.

While the majority of vineyard managers think they understand how most frost protection systems work, Agrofrost’s Frostbuster and FrostGuard machines are often misunderstood. As they use only a fraction of the energy used by other systems it is not uncommon for people to question if they can work as effectively.

The working principle is, unlike other frost protection systems, not based on raising the temperature above the critical values but on phase transition, or in this case by controlling the forming of hoarfrost.

“Where our machines are used, we notice a significantly lower formation of hoarfrost,” said Patrick Stynen at Agrofrost. “We all know that hoarfrost is the biggest enemy for the flowers and buds, but there is a way to use this enemy for protection.”

The transformation of vapour into hoarfrost is called desublimation or deposition and as a process it releases a lot of energy, which can then be transferred to its surroundings. In the vineyard this energy is not only transferred to the surrounding air but also into the leaves and flowers themselves.

With ice crystals extracting energy and humidity from the flower, the hoarfrost normally inflicts the most damage. Without protection, the layer of hoarfrost will increase and finally cause dehydration and under-cooling. To counter this, Agrofrost machines pass a hot air stream, every 7 to 10 minutes, through the vines causing part of the ice to evaporate (called sublimation). The remaining ice also receives energy from the passing air. The higher the humidity, the more energy is transferred.

After a few minutes, the air cools down again, the relative humidity increases and some new rime will be formed. This again releases more energy to the air and also to the flowers creating an optimal protection with only a fraction of the energy input that is needed by other systems.

“Another big advantage is that the use of these machines can also improve fruit set,” said Patrick. “This was discovered by some of our customers who noticed an improved fruit setting when they used the machines during full flowering.”

To backup these claims, studies have been carried out at the PCF Research Centre in Gorsem, Belgium, with initial results proving  there to be a positive effect on fruit set improvements.