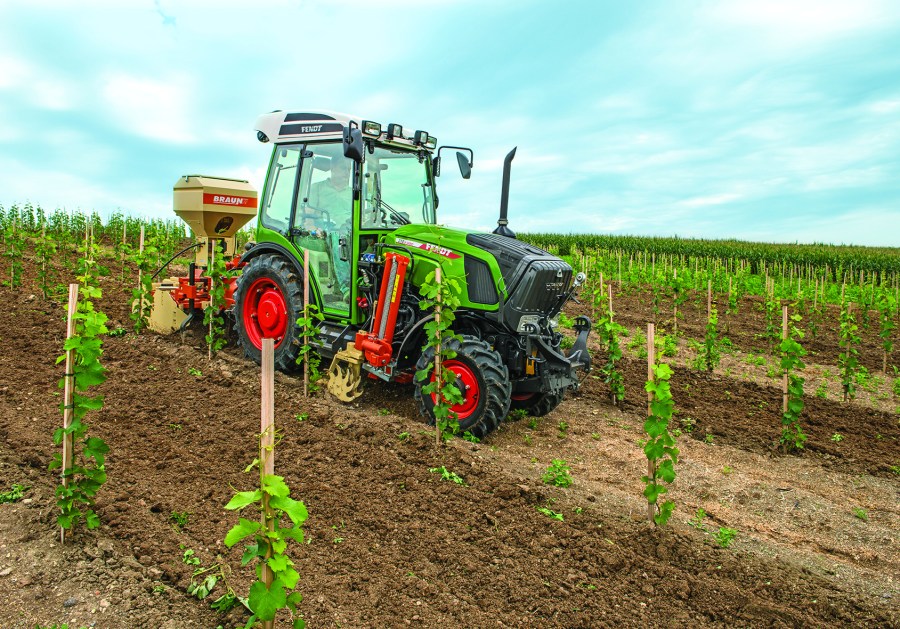 Vineyard looks at how the family firm, started by Nick and Barbara Seymour in 1974, has flourished over the years with the provision of quali﬚ brands, exemplary service, engineering knowhow and a growing national customer base.

In this 12-page special feature, Vineyard looks at how the family firm, started by Nick and Barbara Seymour in 1974, has flourished over the years with the provision of quali﬚ brands, exemplary service, engineering knowhow and a growing national customer base.

In the mid-1980s Lamberhurst Vineyard, approached local agricultural engineer Nick Seymour at N P Seymour to rebuild one of its grape presses. Although it was an unusual request at the time for the fruit and hop machinery specialist, not wanting to pass up on a challenge Nick accepted and the work within the developing sector soon paved the way for N P Seymour to become one of the country’s leading vineyard machinery suppliers.

Over 30 years later and the Kent-based, family-run firm remains a well respected name in the English viticultural world. Nick, who has since been joined by his daughter Claire Seymour and a team of engineers, sales and office staff, supplies vineyards nationwide with quality machinery, engineering expertise and exemplary service.

“Around the same time as I was approached by Lamberhurst Vineyard, there was a surging interest in growing grapes in the area so we began to look for suppliers of viticultural equipment,” said Nick Seymour, who founded N P Seymour in 1974. “We soon began importing everything from sprayers and mowers, to pulverisers, direct from Italy and Germany and built up a range of equipment we felt was suitable for the English viticultural market.”

While N P Seymour had originally been established to service, maintain and repair fruit and hop machinery for farmers in the Weald of Kent, Nick Seymour embarked on the sales side of his business in 1978, shortly after new regulations were introduced requiring all tractors to be fitted with safety frames.

Over two years, Nick supplied and fitted over 100 frames, mainly for Massey Ferguson 135s, to the region’s fruit farmers, which not only helped to consolidate N P Seymour’s reputation for quality, but also helped to drive the firm’s expansion into suppling equipment as well as servicing, maintenance and repairs.

Today, N P Seymour still deals with many of the original vineyard equipment suppliers from the 1980s. Wanting to offer the best brands to customers, Nick has always focused on quality and remains meticulous when it comes to choosing which manufacturers to represent. Nick trained as an agricultural engineer at Maidstone-based Drake and Fletchers. Claire Seymour who now manages the firm’s sales and marketing studied agricultural mechanics at Plumpton College. It is therefore the wider knowledge and understanding of how the equipment works, not just the ability to sell a product, which has allowed the firm to develop its quality product range.

“Our engineering expertise and name for good service has meant that manufacturers have often come knocking on our door to ask us to support their products. Over the years we have been able to add many well-known names to the specialist machinery and equipment we can offer to vineyards,” said Nick Seymour.

From French produced Berthoud sprayers, to Dutch manufactured Perfect mowers and pulverisers, who both approached Nick Seymour in 1992, to Bucher Vaslin, the French wine pressing equipment developers, who got in touch six years ago, a long list of respected specialist suppliers has helped put N P Seymour on the map as one of the very few machinery dealers in the country to focus on vineyard equipment and narrow tractors. “We have always been aware of new trends and technology and have taken all the opportunities which have arisen. We have contact with the majority of the key players in the viticulture industry and are proud to be working with suppliers of decent equipment of which there is plenty of requirement from people all over the country who are looking at planting vineyards,” said Nick.