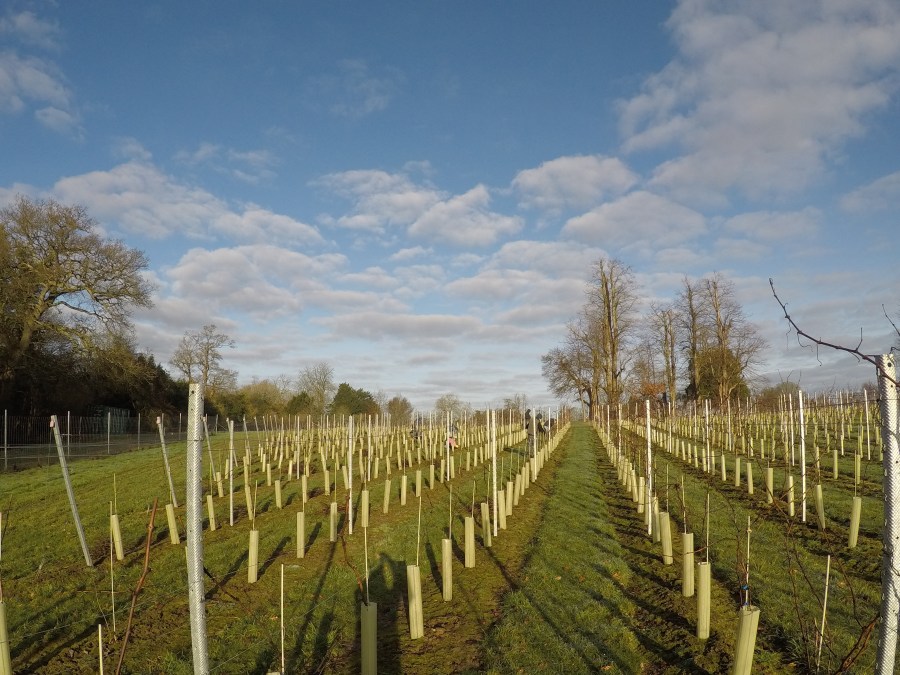 In all probability, when you planted your vineyard you used some type of shelter to give your young vines a good start in life, and as with all things viticultural there are all manner of shapes and sizes of vine guard. Providing shelter around young vines offers a multitude of benefits, they protect against browsing mammals, enable the use of herbicide or mechanical weed control and limit weather damage and desiccating winds. In addition, the shelter promotes a micro climate effect which helps to reduce evapotranspiration and reduces vineyard labour for vine training by accelerated trunk growth. Needless to say all the manufacturers claim that their product’s USP offer the best benefits.

Vine shelters were an adaption of tree guards first promoted by Graham Tuley following an experiment wrapping polythene around a solid mesh guard. They’ve been around since the 1980’s and are now standard operating for most growers in the UK. There are various materials used in guard production, most commonly carton paperboard, (MonarchZipset) craft paper and single (Samex) or double walled polypropylene (Tubex, Groguard). The essential ingredient to the polypropylene variants is the ultraviolet light blockers that allow the shelter to last for multiple seasons, a minimum of three seasons being essential for UK viticulture. Growers using the single walled sheeting type commonly used in warmer climates have found that with our occasional snow fall these are prone to collapse so aren’t an option. Also in this grower’s experience, the paperboard or craft paper models tried didn’t last in the UK climate due to high precipitation levels.

The various heights offer different solutions, 40cm as minimum, 60cm as standard and 70cm plus for high cordon trellis systems. The shorter tubes will not prevent mammal damage and will only protect against herbicide drift, consequently these should only be used where perimeter rabbit / deer netting is in place. A rigid 60cm shelter will deter rabbits, hares and rodents.

One of the main problems with vine shelters is access to shoots for hand work during the growing season. With a solid type of shelter, options are limited (cutting tubes half way, ‘bud brush’), however some manufacturers offer an openable option (Tubex vine wrap, Groguard) and this allows easy access for shoot selection, hand weeding, lateral removal etc. The down side for this is the shelters’ seals can become damaged with use or lose rigidity, leaving vineyard managers frequently patrolling hedgerows to retrieve shelters. To compensate for this I would suggest the addition of an anchorfast band tie around the circumference to secure. The latest addition to Tubex range, the ‘Peg Thru’ aims to minimise this problem with addition of an aperture to allow the vine tutor to be secured to the shelter.

The correct internal diameter of the shelter should encourage the lead shoot towards the light source and suppress lateral shoot growth. A shelter’s internal diameter will determine the trajectory of the lead shoot and hopefully provide a straight trunk, too wide may cause kinking – too narrow will cause crowding and potentially increase humidity. Manufacturer diameters range from 70mm to 220mm, clearly wider diameters allow for easier hand work access but will increase product and therefore cost.

As we know growing grapes in our climatically challenging island is problematic and our early season challenge is frequently late spring frosts. Whilst vine shelters can prevent frost damage they can also cause it, frost damage occurring as the cold air becomes trapped inside tubes. This is a tricky one to prevent, either total frost mitigation measures are required (propane heaters, fans, etc.) or a barrier to stop frost entering tubes (fleece or straw?).

Some growers are frequently tempted to reuse shelters on vineyard expansions or replacement. Don’t be enticed by this cost saving, you’ll inevitably spread fungal spores from older to more fragile young vines. Plus the UV protectant breaks down after a season and you have to replace spent shelters. When making your choice of shelter, ensure it lasts, don’t cut corners and your vineyard will last for decades.

Whichever style of shelter you opt for you’ll inevitably need to train your lead shoot to the tutor once it appears from the guard, and the tutor needs to be secured to your cordon wire with some height above. It’s a tool that divides opinion but I genuinely like the Max Tapener but there are plenty of growers who’ve lost hours and days ending up with nothing more than Ticker Tape! The new ergonomic version looks promising though…