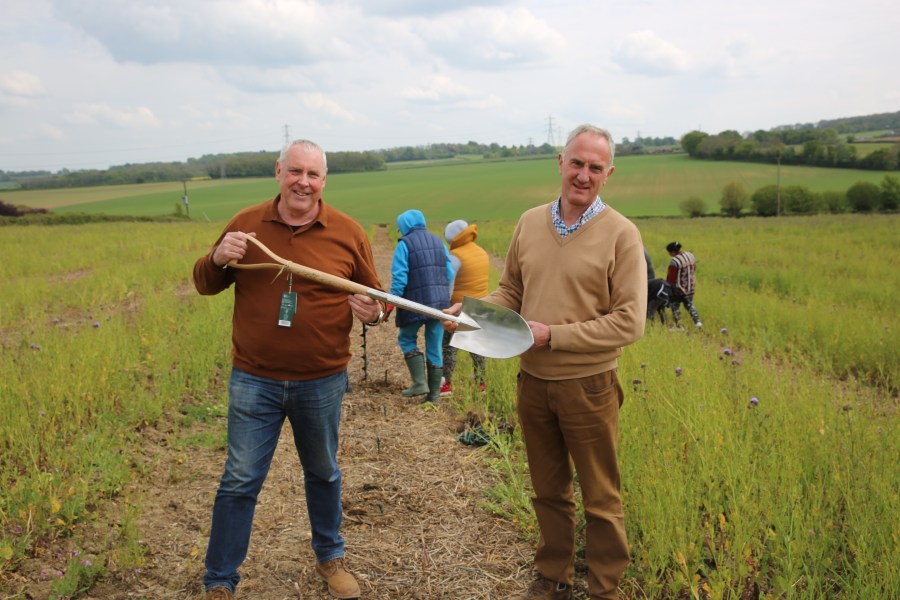 Following on from the story ‘sustainable investment opportunity’ which appeared in the February 2019 edition of Vineyard magazine, one of Hampshire’s latest vineyard and winery projects has broken ground.

Following Simon’s modern approach to agriculture, the vineyard, which is being established on one of the farm’s south facing, steep sloping, 5.5-hectare parcels, is set to be the first of its kind in the UK being managed under the principles of ‘Conservation Viticulture.’

While the full details of how and why Simon got into conservation agriculture, as well as how he intends to apply this to viticulture, can be found in the previous article, two core methods involve avoiding anything which will disturb the soil and the use of cover crops to promote soil health and structure.

With this in mind, Penn Croft Vineyard has been prepared very differently to normal sites and the vines are being planted entirely by hand, in between sprayed off strips of a cover crop of phacelia, oil radish and some peas.

“The team of eight from Vine-Care have been using a petrol-driven auger to dig about a foot into the soil,” said Simon Porter, who has farmed the land at Penn Croft for over 40 years. “The soil is very moist because it hasn’t been cultivated in years, which will give the vines the best possible start in life. I don’t think the team has ever planted vines in between a cover crop before, but they seem to be very happy with how it is going. On the first day they were able to get through more than expected, with the team finishing the Bacchus and moving onto the Chardonnay.”

Planting started on Friday 3 May 2019 and following this the team will be installing some of the trellis work. The vines will be established on the Scott Henry system to compensate for the lower density of vines caused by the 3.5-metre wide rows, which will be sowed with cover crops. The Scott Henry system should also provide more sunlight, improved air flow and the grapes should be in a more open position to reduce disease pressure.

Following Simon’s passion for soil health and sustainable farming, it is hoped that the conservation viticulture vineyard will produce some truly special grapes which will be exclusively used to eventually produce 80,000 bottles of the estate’s own-label wine.

As detailed in the last article, aside from the new approach to viticulture, Penn Croft Vineyard is also rather special as people can share in the project by investing in Itasca Wines.

With the unique approach to viticulture, combined with the general rising reputation of English wine, Malcolm Walker, director of Itasca Wines, is confident that they will be able to raise £2.25 million from investors and with the minimum buy in set at just £1,000, he also believes it will attract people from all walks of life and help to demystify the wine trade.

As well as benefitting from complimentary cases of own-label wine and invitations to exclusive investor’s events at the vineyard and winery, Itasca Wines’ shareholders will also get a slice of the business’ profits.

To ensure that this project becomes as profitable as possible, as soon as possible, and after seeing how many producers were caught out after the bumper crop in 2018, a contract winemaking service is now also being offered.

“The project has changed and evolved a lot since we started with the idea of planting a little vineyard,” said Malcolm Walker. “There is a huge imbalance between vineyards and wineries in the UK and not all wineries produce for other people. A lot of the smaller ones don’t have the capacity to look after other growers’ products and a lot of the bigger ones just want to focus on their own brands.”

Benefiting from numerous redundant grain stores at the farm, the winery will be designed to house nearly £1 million worth of equipment, which will be leased, and there will be dedicated temperature-controlled storage too for any producers who have run out of space on their own sites.

A winemaker has already been secured for the 2019 season. Josh Hammond not only grew up on a family vineyard in Marlborough, New Zealand, but trained at the region’s largest winery, Villa Maria, before coming to the UK where he has since picked up extensive experience working with English fruit.

“We will be offering the complete grape to bottle service,” said Malcolm. “From an investor’s point of view, our costings now show that the business will be making a profit quite soon and the contact winemaking services will also allow us to build a bigger winery and will help to fund our own Penn Croft brand.”