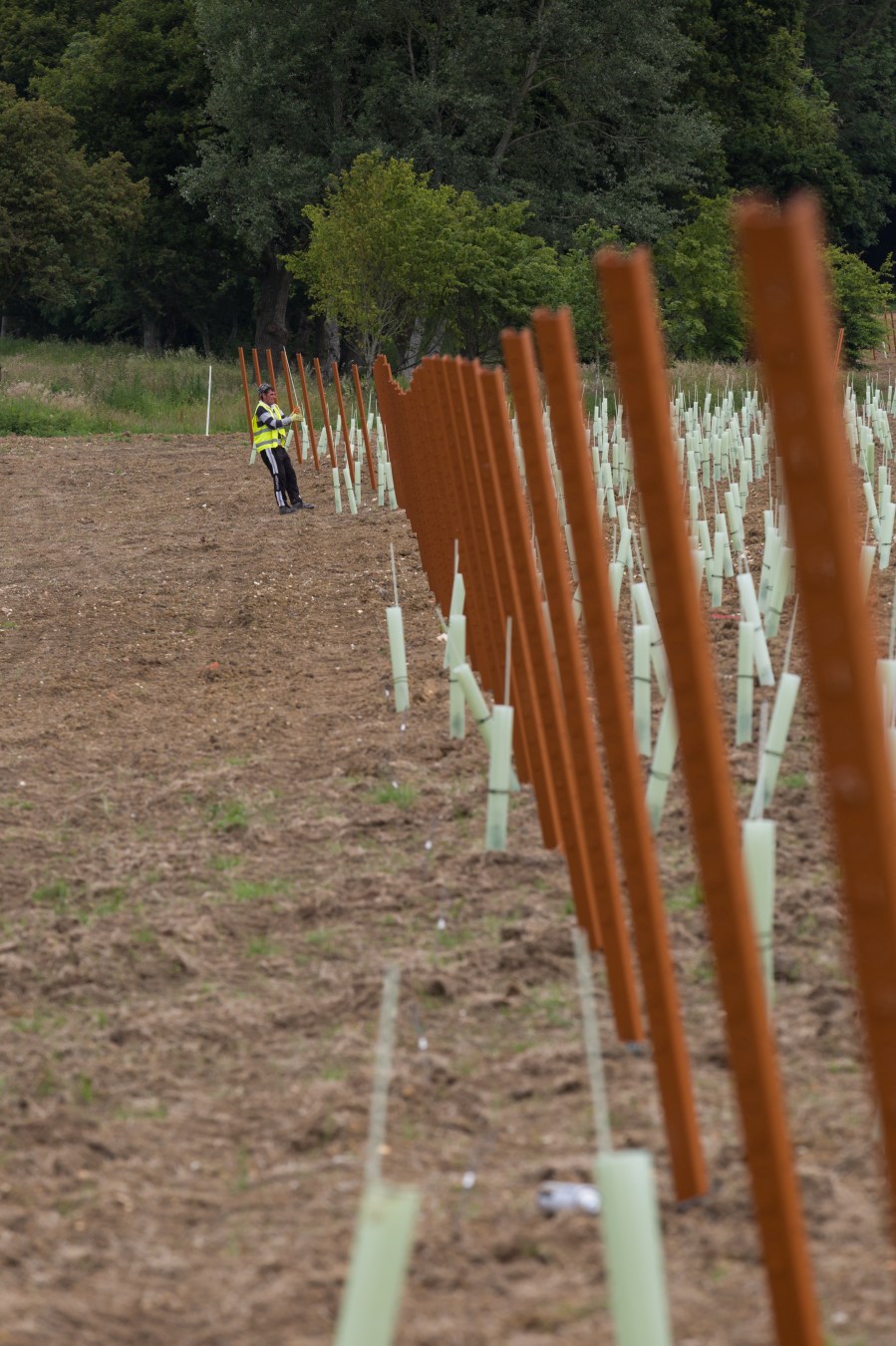 When the financial crisis hit in 2008, James Dodson decided it was time to take his trellising business in a new direction. Convinced that the economic crisis was going to sound the death knell for the planting of new vineyards, the Canadian Plumpton College graduate turned his focus to helping already established estates manage their existing acres.

“Ridgeview was one of the very first clients I supplied vineyard labour to and Mike Roberts, an instrumental player in building the industry, was a great mentor to me,” said James, who is the founder of Vine-Works Ltd with business partner and Plumpton alumnus D’Arcy Gander. “I had originally started working at the Sussex estate while I was studying and I was able to bounce a few business ideas off Mike, who was very supportive and gave me the confidence to just go for it.”

Before heading down the vineyard management route, James had been busy making a name for himself in the establishment sector, with his top-standard trellis installations and ability to supply Austrian steel vine posts.

Originally an archaeologist, James found himself working in wine retail, as a fine wine manager for Oddbins in Edinburgh. After five years he decided to follow his interests into the production side and so enrolled on the Viticulture and Oenology course in Sussex. To help fund his studies, James began installing trellis work for a few vineyards in the local area and by the time he graduated in 2006 he had successfully developed a working business model.

“I remember meeting Ernst Weis, whose team would come over from Germany just to plant vineyards and so I asked if we could team up; I would install the trellis work at the sites he planted,” said James, who continues to work closely with Ernst and his company Eugen Weis. “He said that we could work something out if I used his vine posts, so I started selling Voest posts. It soon became an issue that I didn’t have my own machinery and so Ernst bought me my first New Holland vineyard tractor and I paid him back over three years. He was a key player in helping me to get the company off the ground.”

By 2008, James was not only selling and installing posts, but also helping customers right through the early development stages of establishing a vineyard. The company was organically expanding and amid concerns that new planting would quickly come to a halt, James started to receive an increasing number of requests from vineyard owners who needed help managing their vines.

Meanwhile, D’Arcy, who got into the wine trade after developing wine lists and inventing food pairings for an independent pub company he ran in Brighton, had also started his own management company.

Graduating from the same course at the same time as James, D’Arcy had moved on to work for Nyetimber, which was rapidly expanding under the new ownership of Eric Heerema. After two seasons, he moved on to focus on his own project, working for four growers and looking after everything from pruning to tractor operations.

“James thought vineyard management would be an ideal way to keep his business going and it made sense for us to join forces,” said D’Arcy. “From there, the management side of the business grew quite rapidly. In 2010 we formed the limited company and moved from James’ attic to a portacabin at the back of a cow shed at Court Garden Vineyard, who were also one of our original clients.”

Nine years later, the duo have not only moved offices, taking on a large storage warehouse, but they have also successfully attracted a dedicated and passionate management team; have nurtured a 100-strong labour force; launched an ecommerce offering and technical scouting service; and even planted their own research and development vineyard, from which they will be releasing their first wine this year.

Despite James’ concerns, the establishment arm of the business never died, nor did it plateau and with interest in UK viticulture snowballing, the last five years have been described as ‘insane’ by James and Vine-Works’ vineyard establishment manager, Chris Buckley.

Another ex-wine retail worker and Plumpton College Viticulture and Oenology graduate, Chris joined the team in 2012 as a supervisor before taking a year’s sabbatical, travelling to Margaret River and Napa Valley. Since his return in 2015, Chris’ responsibilities have grown and evolved naturally with the business and today he is the first point of call for all new planting enquiries.

“When I started, we had about 15 workers and there was only one team looking after the trellising,” said Chris. “Now we have over 100 labourers, four trellis crews and planting is busier than ever; in 2019 alone we established 28 new vineyards. I look after everything from small one-hectare plots, to established estates looking to further expand their production capabilities.”

Dedicated to guiding clients through the very first stages of their journey into viticulture, after initial contact has been made, with discussions about land location and orientation, Chris will visit the planned vineyard site to visually assess its suitability for planting. From there, Chris will progress with a full feasibility study, producing an in-depth report to help customers with their final decisions.

“We will purchase climatic data and carry out other essential analysis for the potential grower so that they can create a business plan and make a fully informed decision on whether or not to plant,” said Chris. “The typical client will be investing £125,000 in the vineyard, which is why the feasibility stage is so vital. Often this stage is a bit of a reality check for people too as we are always very honest about the longevity and challenges of owning a vineyard.”

From there the Vine-Works team will project manage everything, unless the client wants to take a certain aspect on themself. Chris and James will make recommendations on which varieties to plant, the rootstocks and clones, they will order the vines, arrange for the soil to be suitably prepared, book in the planting machine and then install all the trellis work.

“We usually spend 18 months getting ready to plant, and then it is often all complete within a few hours,” said Chris.

To read the full article view the July 2019 online edition.