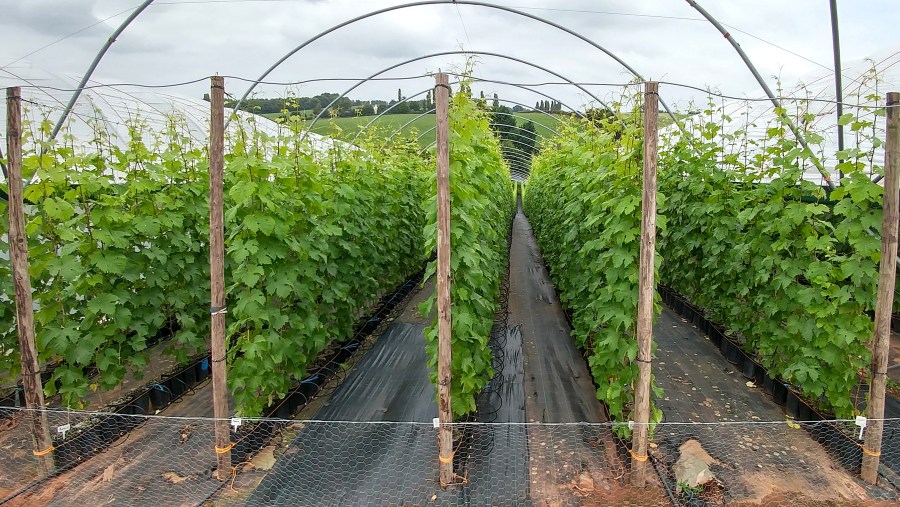 Forget grafted vines from France or Germany, following years of trials Haygrove Evolution is now offering British vineyards the chance to grow grapes from own rooted vines produced this side of the Channel. And what could possibly make English wine more patriotic than being produced from vines which haven’t been imported from the continent?

Under the Haygrove Evolution umbrella, Simon Day has spent the last four years developing a commercial supply of own rooted vines in the UK. This coincides with his continuation of a second-generation viticulture consultancy business, expansion of the Once Upon a Tree cider brand and the development of award-winning English wine brand, Sixteen Ridges (see Page 35).

Having grown up surrounded by vines at the Three Choirs vineyard, Gloucestershire, which was co-founded by his father in the early 1970s, Simon has been immersed in the viticulture industry all his life.

As English wine was on a decline in the 1980s, Simon studied biochemistry at the university of Sussex. After graduating, Simon’s interest and passion for viticulture led him to explore winemaking in Australia, New Zealand and North West America before returning to England to pursue a career in winemaking.

“After my father, Tom, retired from Three Choirs he started supplying grafted vines from a German nursery,” said Simon, production director at Haygrove Evolution. “After he passed away I made the decision to come back from Jersey to continue what he had started, and Vine and Wine was born.”

With the English wine industry expanding, Simon continued to import grafted vines from the same nursery and helped many new vineyard owners to get planted up. In 2012, he was approached by Cilla Clive, mother of Angus Davison, owner of global fruit grower Haygrove Ltd.

“Cilla wanted me to plant some vines on her site at Redbank, near Ledbury, Herefordshire,” said Simon. “Shortly after moving back to the area I had mapped out all the suitable vine land in a 30-mile radius, so I knew the site would work very well.”

Meanwhile, Simon’s ‘hobby’ cider business, Once Upon a Tree, was proving more successful than anticipated and required a much larger manufacturing premises. Through discussions with Cilla and Angus, an opportunity opened up to be involved with Haygrove Ltd.

“With Liz Waltham joining the team to oversee arrangements, in 2015 we moved production and the consultancy business to Redbank,” said Simon. “Once Upon a Tree and Vine and Wine were sold into the new business; Haygrove Ltd invested into the new winery building and equipment; and Haygrove Evolution was born.”

To this day, Simon continues to import and supply grafted vines from the German nursery his dad began working with. However, after noticing that one variety was particularly hard to get hold of, and not wanting to keep disappointing customers, Simon decided to trial propagating own root vines.

“I was struggling to supply Madeline angevine as it is relatively specialist to the UK,” said Simon. “While I have in the past sent over buds to be grafted, we still didn’t have enough supply and were disappointing customers. My father used to do some own root propagation and so we decided to trial a new way to supply vines.”

Through the link with Haygrove Ltd, who have transformed the quality of propagated soft fruit plants and now produce 1,350,000 strawberry, 300,000 blackberry and 1,000 raspberry plants per year, Simon has been able to tap into years of expertise and experience to develop a commercial offering of high quality own root vines.

Utilising Haygrove’s polytunnel infrastructure to bring the vines on in a controlled environment, the initial experiments began in 2014. While Haygrove has a thriving track record in the propagation of soft fruit, vines were new territory. Through intensive learning, research and development over the past four years, the vines are now of a quality ready for commercial supply.

“The plants we were initially producing were nowhere near the quality of the plants we have got today,” said Simon. “We started trialling the project in a small way, only working with growers who I know well and keeping a close eye on the vines’ progress.”

Alongside several pilot customers, including Three Choirs, Simon planted a mixture of grafted and own root vines at Redbank and has been able to directly compare varieties on the same patch of land.

“All the propagated vines have been doing incredibly well across the trial sites,” said Simon. “We have noticed that the own root vines at Redbank establish quicker than the grafted vines, they are keeping their leaf longer and act healthier.”

Early trials have been carried out with wood selected from vineyards well known to Simon, such as Sixteen Ridges and Redbank, but as the project expands so will the area for sourcing wood.

“We need good healthy vines to start with and good quality of wood,” said Simon. “We then select, sort and cold store them until we are ready to go out to propagation. In March, we will start to callous the shoots and plant them out in coir, a sterile growing medium. They are then warmed from underneath to encourage callousing while retarding any bud burst.”

The vines are then allowed to bud and viable vines are planted out into individual pots with more coir substrate and put onto an irrigation system. One shoot is then trained and can be supplied at a desired height, usually high enough to reach the fruiting wire.

“When you look at traditional beds in vine nurseries they tend to be very dense when they are planted out,” said Simon. “We have single rows so it looks more like an ordinary vineyard. This way we can keep air flow and sunlight into the leaf at an optimum and can keep a close eye on each individual vine. We will weed out any poor performers to maintain a really high standard.”

Like ordering grafted vines, vineyards should be looking to order own root vines at least 12 to 18 months ahead of planting and will need to be prepared for hand planting.

“We can make our vines bare root, but they thrive so much better if they go in from the pot and the roots are not disturbed,” said Simon. “If you plant in the autumn (October or November) the vines are more established and will therefore get a much better start. We see big advantages in getting them established in the autumn and potentially getting a crop a year early.”

Propagation is currently limited to four main varieties: Pinot noir; Pinot noir précoce; Seyval blanc; and Madeline angevine, which Simon can trace back to the Ray Barrington Brock clone. Bacchus is the next variety to be brought into propagation with other varieties such as Reichensteiner and Ortega being made to order.

With such a unique offering already in place, Simon is also keen to offer a bespoke propagation service for vineyards. Especially aimed at those with ageing vines, vineyards would be able to select wood from the best performing vines for the propagation of new own root vines.