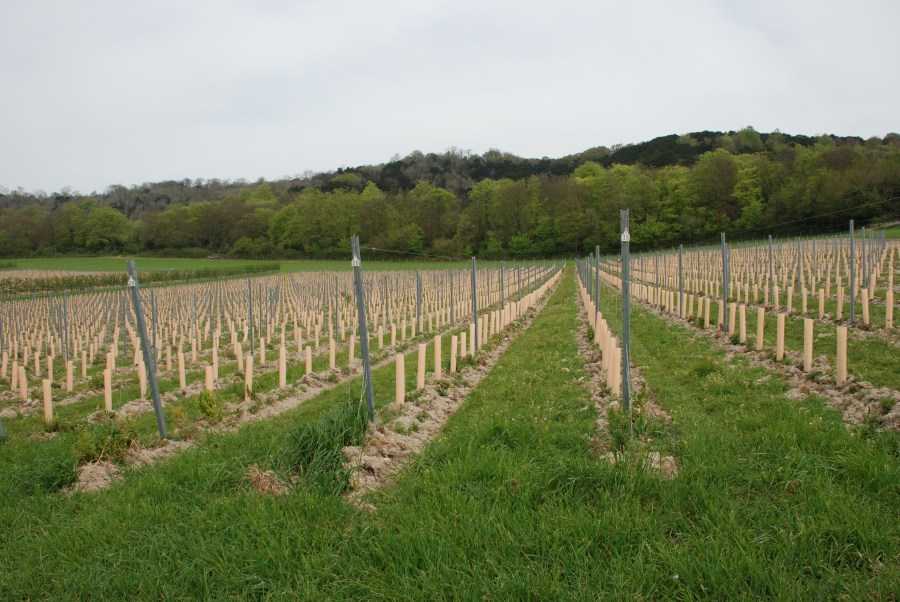 Sustainable soil health is now firmly on the agenda. Michael Gove is driving forwards with his ‘Green Brexit’, growers are spending more on mechanical weeders and less on herbicides, under vine and interrow cultivators are being put to use, and it is becoming increasingly common to see cover crops, such as Red Clover, among alleyways providing both nitrogen and deep spanning roots to help aerate the soil and alleviate tractor compaction.

But it is not just compaction and herbicides which are preventing UK viticulturists from getting the most out of their vines; synthetic fertilisers and foliar feeds, once seen as the solution for improved growth, are now causing more damage than good in vineyards within our shores.

Vineyard editor Victoria Rose met with soil health guru, and founder of Cloud Agro, Ross Barclay-beuthin and Richard Lewis, head of viticulture for Chapel Down, at the Kent producer’s Court Lodge Farm vineyard in Boxley to get to the root of the problem.

In his formative years, Ross was a large-scale arable and livestock farmer in South Africa. Having always taken a scientific approach to agriculture, he became involved in a prominent government programme looking at the development of farming operations in the country, mainly focused on soil health.

“I was working with the UN and various aid organisations who were trying to find ways to rehabilitate African soils which had been badly degraded over the years due to poor farming practices,” said Ross. “I started looking at vineyards, where only 20% of the land is ‘in use’, and I thought it was such a big waste of productive space so I wanted to see what we could do in between the vines. I found a vineyard owner who no matter how much fertiliser he applied, the vines weren’t improving and were just getting worse.”

After he was given the green light to experiment on the 200-hectare vineyard, Ross set about planting Lucerne and spreading chicken manure, waiting to see what would happen. In just one season, the vineyard had “quadrupled its output on grapes”, sparking further questions in Ross’ mind.

“We quickly realised that over the years, the soil health had been destroyed by chemical fertilisers,” said Ross. “The application of synthetic products had caused salts to build up in the soil and this was preventing the vines from accessing essential nutrients. The Lucerne had broken up all the soil compaction and flushed these salts away, while the manure had reactivated the soil life, and with the right bacteria, fungi and mycorrhiza now present, the vine was suddenly thriving.”

In this eureka moment, Ross realised that he had found both the problem of why soils had become so degraded and the solution as to how they could be rehabilitated. From this Cloud Agro’s Smart Feed system (the process of looking at what a vine requires and feeding the soil accordingly) was born.

In a bid to develop this solution into a product which could be rolled out across the rest of Africa, in 2013, Ross relocated to London to be closer to Westminster, the UN and a range of high-profile NGOs in the food and agricultural development sector.

It was at this time that Ross discovered the UK’s viticulture sector and the potential benefit of introducing Smart Feed to growers. He started working with manufacturers in Europe on a pelleted soil conditioning product, called Futuregro, and after securing a warehouse at Tilbury Docks, his company Cloud Agro now distributes pellets nationwide.

“Improving soil health is something which I have been driving for a long time and it wasn’t until I moved to the UK that I could see a commercial potential,” said Ross. “It wasn’t long after that, Michael Gove launched his new agricultural policy and soil health became a real part of the directive going forward. The whole world seems to be making a turn around and it is encouraging that we all seem to be swimming in the same direction.”

Based on the original Lucerne and chicken manure combination, the Futuregro pellets, provide a natural source of nitrogen that has a slower release than chemical alternatives and has already been composted to ensure that they actively improve the soil from the moment they are applied.

“Most growers who are already thinking about feeding their soils have been applying green waste compost,” said Ross. “It is encouraging that there are so many vineyard managers looking at positive ways to make improvements to the soil, but green waste can take five years to break down and provide nutrients to the vines.”

As well as getting to work quicker, the pellets are also much easier to manage than compost. Instead of attempting to broadcast 40 to 50 tonnes of green waste per hectare, which can be challenging to do effectively once vines are established and trellis work is in place, Futuregro can be spread at a rate of around one tonne per hectare with a small tractor and spreader, which also minimises the rate of compaction.

“I have designed a protocol which growers can follow to calculate how much Futuregro they need to apply,” said Ross. “By combining a number of factors, such as soil type, the potential for leaching and yield from the previous harvest, we can calculate what nutrient replenishment is required.”

As well as looking at what nutrients the vines have used in a season, Ross also compares soil analysis with signs of deficiency and petiole analysis to check whether nutrients are being locked up in the soil instead of being released to the vine.

In order for vines to absorb the nutrients in the soil, good bacteria and fungi need to be present. Mycorrhizal fungi act as an interface between the soil and the vine, helping to mineralise and supply nitrogen and phosphorous, which the plant cannot process alone, in exchange for carbon which the fungi cannot produce itself. The fungi can also reach deeper into the soil, picking out minerals and supplying them to the vine.

Over the years, essential mycorrhiza can be killed off through extensive herbicide use, tractor compaction, which leads to a lack of oxygen in the soil, as well as the build-up of unnatural salts from chemical fertilisers, as Ross discovered at the vineyard in South Africa.

Without good bacteria and fungi present in the soil, it doesn’t matter how much fertiliser is applied to the soil, the vines won’t reap the benefits. With growers desperately looking for ways to feed the vines, it appears that to compensate for this, an over-reliance on foliar feeds became the norm.

“Foliar feeding has definitely been over used in the UK and is holding the industry back in terms of yield potential,” said Ross. “Vine leaves are designed to respire; to photosynthesise. They are not there to take in food. The roots are where vines take in and store nutrients, but instead of looking at the soil, the industry has been force feeding vines through a leaf which is neither effective nor sustainable.”

As well as ineffectively delivering nutrients to the plant, Ross also discovered that these foliar feeds were also further contributing to the build-up of salts in the soil, perpetuating the vines’ nutrient deficiency problems and providing misleading data to vineyards carrying out soil tests.

“I was invited to see some vines at Chapel Down which varied from exceptional to abysmal yield performance in just a few metres,” said Ross. “Richard Lewis wanted answers because they were applying the same fertilisers, the soil visibly looked the same and analysis showed that all the right nutrients were present, but the vines at the top of the slope were massively outperforming the ones at the bottom.”

To read the full article see the May online edition, page 40.