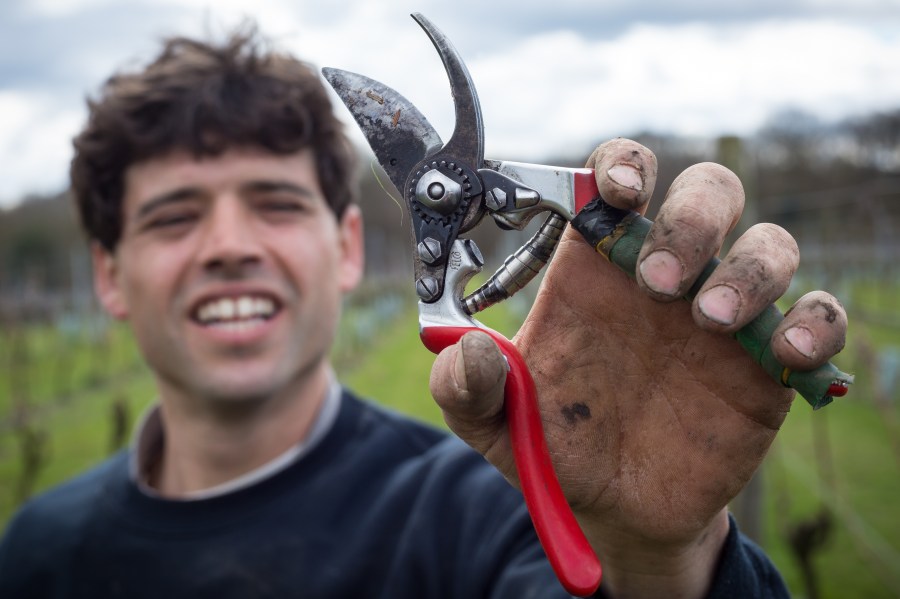 Will Davenport planted his first vineyard at his parent’s orchard, Hazel Street Farm, in Horsmonden, Kent, in 1991.

Based on his experience of working at a vineyard in Romsey, Hampshire, the five-acre site was established with a selection of similar German crosses, mostly based on Riesling and Müller-thurgau, including Bacchus, Farber, Huxelrebe, Ortega and Siegerrebe. Planted with the sole intention of blending, these varieties have gone on to create the estate’s iconic Horsmonden Dry, a complex, fragrant and balanced still white wine, every year since 1993.

28 years on and the original vineyard is still thriving. Some of the second-hand chestnut hop poles used for the trellis are only just being replaced (on the day of my visit the team were busy knocking in about 50 steel vine posts) and the vines too are still in situ, with Will choosing to coppice rather than replant.

“These older vines need some TLC, so we are chopping them right down and allowing new trunks to come up,” said Will Davenport, owner of Davenport Vineyards. “It rejuvenates the vine to a certain extent and is an opportunity to get rid of all the fungal diseases which have entered the wood through pruning cuts over the years. We’ve been doing this for about seven or eight years now; there is no system, if we see a suitable shoot, we do it. In that time, I think there has been a noticeable difference in yield and disease control, and I am hoping that realistically we will get another 30 years out of this site.”

As the English wine industry has blossomed since the early 1990’s, when it was considered “a bit of a joke”, this site is no longer Will’s only vineyard and today Davenport has 24-acres, split across five sites, spanning two counties, Kent and Sussex, with varieties now also including Auxerrois and the ‘modern’ magic trio, Chardonnay, Pinot noir and Pinot meunier, which are used to produce the estate’s sparkling wines.

In 2003, Davenport Vineyards was awarded its organic status from the Soil Association, having started the conversion process in 2000. While organic viticulture restricts what chemicals can be used to fight weeds, disease and pests, Will and vineyard manager Phil Harris both agree that they “absolutely wouldn’t farm any other way”.

“It is generally accepted that organic growers are out in the vineyard more, spending more time with the canopy and we also do a lot of weeding, but it all works very well,” said Phil. “I am not an eco-warrior and I don’t think conventional viticulture is ‘murder’. Organics just work for us and there are certain sprays that I personally would never want to work with.”

While the Soil Association reports that demand for organic produce is increasing across the board, organic wine is quite a specialist market and English and Welsh organic wines are without a doubt a niche within a niche. You would be forgiven for thinking that this category, appealing to just a very small pool of consumers, would quickly become saturated, yet, Will firmly believes that there is plenty of room for more organic producers in the UK and hopes that there may even be scope for an organic vineyard association one day.

“At the moment consumers wanting organic wine look to Germany, Austria and the Loire Valley for instance,” said Will. “I think if every vineyard in the UK went organic, we could really develop a reputation for being the place to go for organic wine and that would be great. But there is one thing talking about going organic and another thing actually doing it. Conventional growers say that their biggest fears of converting are getting wiped out by mildew and a reduction in yields, but both of those points can easily be argued.”

When it comes to yields, Davenport is certainly not lagging behind. In 2018, which was admittedly an exceptional year, the team brought in 55 tonnes from 19-acres of productive vines. As well as averaging 2.9 tonnes per acre (t/a) across the whole operation, which is just above Wines of Great Britain’s (WineGB) reported average yield for the UK of 2.3 t/a, Will also achieved six t/a from his Bacchus, planted in 2007, and five t/a from the Chardonnay.

Alongside the assumption that yields will have to be sacrificed, organic viticulture is also renowned for being more labour intensive (with more emphasis on canopy management and weeding) and indeed, Davenport has three full-time members of staff and two part-timers looking after just 24-acres. While man power might mean more wages, however, cost savings are made in other areas.

“We spray sulphur, copper, potassium bicarbonate for powdery mildew, seaweed extract and we make up our own liquid feeds with comfrey and nettle,” said Will. “We spray every ten days, so we are probably using as much liquid as everyone else, but some conventional chemicals are expensive and can cost around £400 per hectare per application. Our total spray bill for one hectare for the entire year is only £200 and unless the weather is appalling, disease control isn’t too bad.”

When it came to pruning, the team used to fastidiously paint wounds with Trichoderma based products. However, after attending a gentle pruning course and realising that they were probably sealing the disease into the vine, this is no longer practiced.

“Gentle pruning is really important and it makes things a lot easier,” said Phil, who was recently crowned one of UK’s first pruning champions with team mates and colleagues Ben Connor and Tom English (see page 16). “People were taught to choose which cane used to have the best life, but there is no real way to measure that, so gentle pruning is all about looking at the sap flow and making sure you don’t damage the vine. All vines will have some disease; it is about making the cuts in the right place.”

As well as not being able to spray conventional chemicals for disease, organic growers are also unable to use herbicides for weed management, another contributor to the increased labour demands.

“If we were in a hotter climate we could get the weeds under control and relax,” said Will. “But with the rainfall in the UK and our rich, fertile soils, weeds just never stop growing. At the moment Phil and the team remove a lot by hand and we go through with a cultivator once per month. That takes one person about a week do 20-acres, so we have just bought a Fischer mower from NP Seymour which will go in and out of the vines. It should operate at a much faster speed than the cultivator and as we have to mow in-between the rows anyway I am hoping it will save diesel too.”

According to Will, the key to successfully practicing organic viticulture in the UK is attention to detail and the ability to keep one step ahead of any potential problems or threats to fruit quality. With that in mind, conversation turned to the numerous spotted wing drosophila (SWD) traps dotted around the Horsmonden site.

“We seem to be miles ahead of everyone else on this because about three or four years ago we realised it was going to be a problem,” said Will. “We have a small block of Frühburgunder which was planted in 2000. A few years ago, we were picking and there was a strange smell in the vineyard. There was a bit of botrytis and as I started looking at the fruit, I realised there were some grapes affected by SWD.”

Knowing that they couldn’t just spray the pest problem away, Will started doing extensive research to find a proper, long-term solution and has been precision monitoring with traps for three years now.

“We have worked out that if you deploy monitor traps in the summer you will catch a few, but if you keep monitoring with traps in the winter you will absolutely wipe them out,” said Will. “We empty and refill the monitor traps each week, with a pre-made filler which is based on cider vinegar. We have also planted windbreaks with dead end hosts, such as Pyracantha, in the hope that the SWD will lay their eggs in those berries instead of our grapes.”

See the online edition for the full article.