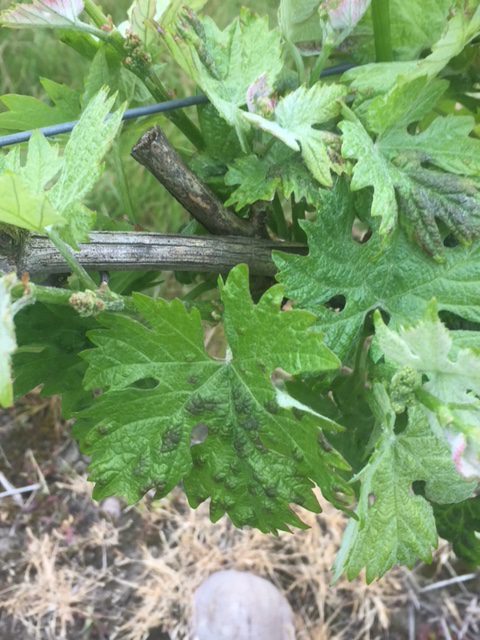 Chris Cooper and Rob Saunders, vine specialists in the Hutchinsons Horticultural Team, discuss the season to date in vineyards.

The settled warm weather has allowed the crop to catch up a bit. But bud break was underway in late April. Certain cultivars are racing away and others are taking their time. Overall rather than being 2-3 weeks behind last year, as we said last month, they have caught up and most crops are just 10-14 days behind 2017. The inflorescences are becoming visible with full flower expected to be mid to late June or early July.

In June, the frost concerns are behind us, but in May we needed to be a little wary about the risk of frosts with the blue clear skies in the day time and cloudless cooler nights, hence the encouragement for growers to use a Cultigrow CBL program to enhance the vine’s resilience.

Bud rubbing at this time of year, mechanical, physical or chemical, needs to be regularly undertaken to maintain the vine’s cropping structure and to ensure that the majority of nutrients go the required areas.

June and July are the months when pests and disease become more of a priority. Already we are seeing scale insects, with ants feeding on the honeydew. Movento (spirotetramat) has approval in vines for controlling scale insects. It is also the time to put out traps for SWD and for Light Brown Apple Moth (LBAM). These traps should be set up and monitored carefully. Bud and blister mite, if not adequately controlled by sulphur, will cosmetically affect the look of the vines and decrease photosynthetic usefulness of leaves and the pest will continue to build up for future seasons. Make a note of lack of control and how this can be improved in the next season.

Disease risk is quite weather and cultivar dependant; If it remains warm and dry, powdery mildew could be an issue.  Past history is relevant as powdery mildew overwinters on the canes. There are a number of choices of powdery mildew fungicides, as highlighted in the WineGB Pesticide Green Book that Chris puts together for the WineGB members. It allows the mode of actions to be mixed up reducing resistance risk. If it is warm and unsettled, Phomopsis, downy mildew and Botrytis are the more pressing issues.

There are some cultural methods to reduce disease risk particularly powdery mildew, having a healthy vine is one. Remember June is the month for leaf analysis to be undertaken and nutrients supplied as required.