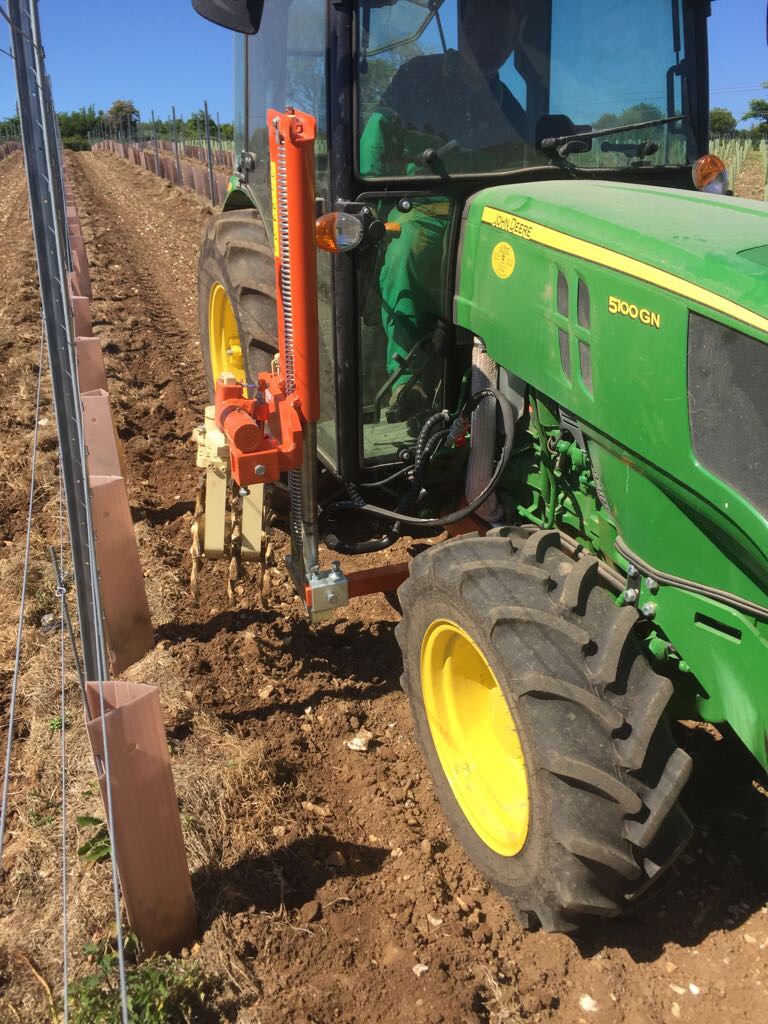 Weeds can begin to grow when the soil temperature reaches about 4-5°C, and are also influenced by light levels; meaning a mild winter can be beneficial for weed growth in your vineyard. Weeds also grow at a faster rate than most cultivated plants, meaning that they can soon become a difficult problem to overcome. However, starting your weed control programme early on in the season will help you stay on top of them.

An annual weed establishes each year from a seed and will live less than a full year. Common varieties such as Fat Hen, Groundsel, Sow Thistles, Chickweed, Annual Nettle and Red Deadnettles are dispersed through their parent and can be present in a seed bed beneath the vines from spring. Monitoring their growth as they germinate in the soil and become present as seedlings is the starting point for a good weed management programme.

These are made up of stationary and wandering types of plants. Stationary perennials are either tap-rooted (e.g. dandelion) or fibrous-rooted (e.g. plantain), whilst wandering types can derive from bulbils (e.g. oxalis), shallow rooted organ (e.g. creeping buttercup) or deep storage organ (e.g. bindweed). Perennial weeds can be easily reduced through tillage, which is a common practice in cereal production but somewhat more difficult and less common in UK viticulture.

The routine approach to weed control in vineyards with the usual suspects of annual meadow grass, groundsel, nettles, willow herb and other broad leaved weeds includes a combination of herbicides with different modes of action. Combining different products together can often give a better kill, such as the use of Glyphosate with Shark (carfentrazone ethyl). Timing is key and ensuring that you are reaching the meristem (growing point) of the plant at a time when the plant is actively growing and not under stress, is vital. The early, rapid, growth of nettles is often a common sign for when to commence spring herbicides.

Last November we saw the last minute reprieve for glyphosate and as such it has been relicensed for a further five years across the European Union. The uncertainty of its future in UK agriculture strengthens the argument for growers to look for alternatives to chemical control of weeds in vineyards.

The Rollhacke disturbs the soil around the vines to lift up rooting weeds and disturb the seed bed in the herbicide strip. This finger-weeding technique is not aggressive and works at a steady pace of 4.5km/h – 9km/h. This German design focuses on reducing chemical inputs into viticulture whilst not compromising the plant health of the vines by not allowing weeds to establish. Depending on the setup of the machine, an area of between 120 -180mm in strip width can be weeded with each pass.

Jon Pollard of Gusbourne Vineyard told me about his experiences with using the Rollhacke system: “We have used the Rollhacke for two seasons now, covering over 60 ha with two, mid-mounted units. We made 12 passes in 2017 with a mower mounted at the same time. We have a sandy-clay-loam soil and the machine handles our conditions very well, so much so that the only herbicide we used last year was one round of Shark (carfentrazone ethyl) to coincide with bud-rubbing. In addition to this we made one pass of hand-weeding for the willowherb and thistles that got away. By implementing this system we have cut our herbicide usage across the entire estate by one third.”

It was Jon’s fear of the loss of herbicides in the future that led him to look for chemical-free alternatives, as well as wanting to conserve the soil microbial health on his vineyard.

As viticulturists continue to promote high quality UK grown wine grapes, the techniques and technologies that we use to achieve this must reflect the evolving political landscape around good agricultural practice and spray operations on our holdings. Just like we plan a spray programme around minimising residue and total pesticide usage, our weed control programme should be considered in the same way too.