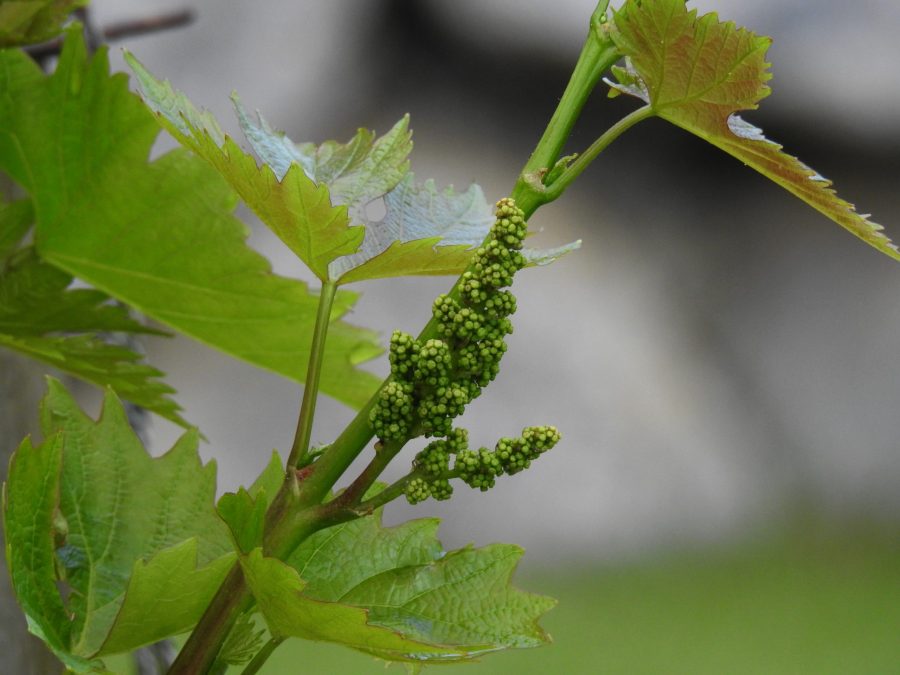 1. Open up the flowering area

Grape vines are predominantly wind pollinated, so open up the area around the flower clusters to improve airflow for pollination. Doing so also exposes clusters to more ultraviolet sunlight, which can help reduce the risk from diseases such as Botrytis and powdery mildew, and enables better spray coverage in the fruiting zone.

Interestingly, pollen beetles may be a useful ally during flowering, as their presence can disturb flowers and pollen, aiding fertilisation. Although beetles are not actively seeking out the pollen, it is often easy to find them covered in it, so there may be some direct transfer occurring too. Avoid controlling with insecticides, unless huge numbers are present; they may be playing a useful, yet unrecognised pollinator role in vineyards.

Ensuring vines are adequately nourished is always vital, and critical from flowering to fruit set when the season’s yield potential is being established.

Boron is a key micronutrient, often not held well in certain soil types. It plays a central role in pollen tube development and pollen viability, so any deficiency could compromise fertilisation and fruit set. Deficiencies can lead to uneven grape development, known as millerandage; other factors include cold, wet weather at flowering.

Boron and calcium, have key roles in protecting vines against Botrytis infection too. Indeed, calcium is key to building resilient cell wall structures and experience has shown balanced calcium feeds containing magnesium and nitrogen, can protect against bunch stem necrosis.

Nutrient requirements should ideally be guided by tissue testing of petiole or midrib samples collected at early flowering. With lab results usually available within a week, testing early should leave enough time to address any deficiencies before flowering ends.

Following the loss of mancozeb (which contains manganese), Terramap soil analysis combined with tissue testing is highlighting more situations where zinc and manganese levels are sub-optimal.

It may also be worth reviewing any nutrient analysis conducted late last season, as it is reasonable to assume that deficiencies detected then may still present an issue.

Flowering – notably caps-off – is a key time to protect vines from potential Botrytis infection, especially if conditions are dull and wet. Poor flowering weather can extend the flowering period potentially from two weeks to three or four weeks, and increase the risk of latent Botrytis infection. Symptoms may not show immediately, but if vines are infected early, Botrytis can lay in wait until fruit starts ripening, when seemingly healthy berries then develop grey rot.

Where stronger Botrytis protection is needed, consider using a very robust programme applied on a shorter application interval (weekly rather than fortnightly).

Alternating chemistry is vital for resistance management, so never use more than two applications of the same botryticide.

In a dry season, when flowering is over relatively quickly and disease risk is lower, it may be sufficient to use a broader spectrum fungicide or softer chemistry such as bio-fungicides.

It is worth noting that reserving pyrimethanil for late flowering has been shown to help reduce laccase levels in juice, an undesirable enzyme which can cause oxidative spoilage.

Nutrient utilisation and fruit set can be enhanced with timely biostimulant use. This is particularly important if trying to get secondary buds to fruit due to losses of primary buds. The flavonoid-based treatment CropBioLife has consistently performed over several years, so is a popular choice among many growers.

In challenging seasons, such as 2021 when May and August were wet and dull, we have seen a notable benefit from the relatively new product, Pinot Pro-Flowering, on some sites.

The product, based on glycine betaine and yeast extracts, aims to promote more even fruit set and berry maturity in specific varieties (namely Pinot and Chardonnay), which are notorious for uneven development within the bunches. Although the field work was empirical, other varieties such as Bacchus and Seyval responded well too. This can be particularly useful for optimising potential in poor flowering/fruit set conditions and/or for varieties where fruit set or ripening is notoriously poor for no obvious reason.

Vivaflor is a new option to the market, requiring an extra application or two over Pro-Flowering. It claims to increase production of flowering hormones (polyamins), thereby improving fertilisation and bunch uniformity, reducing the impact of issues such as millerandage. It is also said to have beneficial activity on enzymes involved in taking up nutrients from the soil.