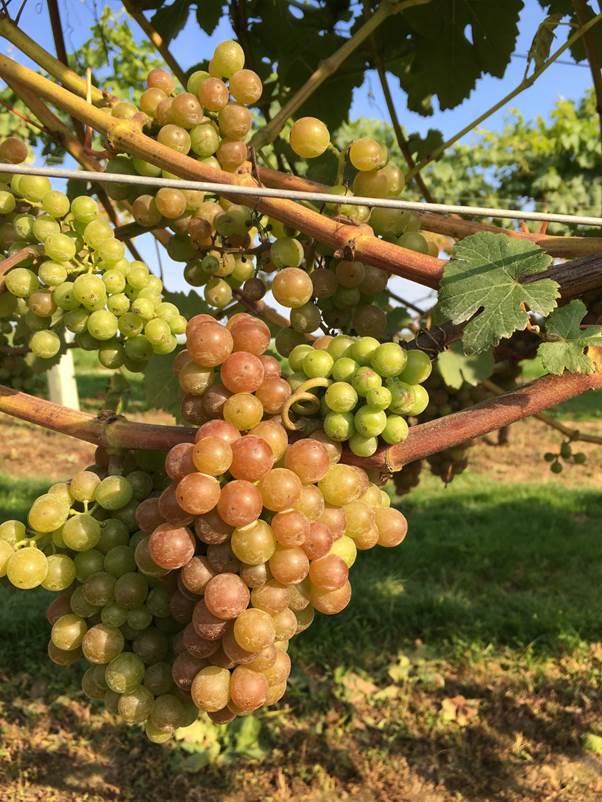 The grapes are pressed, the leaves are yellowing and falling to the floor and attention is now switching towards pruning and the year to come. It seems strange now to look back at the year we have had with the summer’s prolonged high temperatures (and the challenges it brought) making ‘the Beast from the East’ a distant memory. This year illustrates just how influential temperature is on good cropping in grapes, following a prolonged winter.

Despite this many growers across the country found themselves battling, with new plantations suffering in the summer drought, some farms had to resort to irrigating as growing tendrils began to wilt and on sandier sites plantings in their third year of growth suffered. For most however, the rains arrived just in time and on sites across the UK berries developed nicely with negligible cracking compared to last year.

Despite early wet weather the prolonged dry period over flowering and throughout most of the season meant that downy mildew and botrytis, were not as great an issue as they frequently are. Perhaps the key issue is maintaining the programmed attitude towards disease control and using software such as Agrii MetQuest to better time spray applications and to help justify product choice.

It is however easy to get caught out by latent downy mildew and by high powdery mildew pressure throughout summer which seemed to be the dominant issues this year, with botrytis pressure remaining relatively low. Early season rains in May allowed downy mildew to establish on some sites. Where disease established it remained latent and uncontrolled in the leaf during the summer drought. Only re-established in August and September, when the conditions became favourable, highlighting the importance of early season Downy control. Despite the dry weather in May and June which meant clusters remained clean and caps came out of the bunches nicely, botrytis did appear to be gaining ground in Mid-Late September especially on earlier ripening sites. The progression of infections slowed into October, this is likely to have been a result of the drop in temperature and the continuation of dry weather early in the month.

Wasps were ever present this year, and following veraison problems became a regular occurrence on farms despite the use of traps. While many sites faced greater pressure from wasps, the pressure from spotted-winged drosophila was lower than in previous years, with no evidence of drosophila in treated crops. UK wide population data shows that early season populations were lower than in previous years, with populations rapidly increasing in the first half of September. This was not mirrored on farm, with pressures being much lower than last year. Appearance in the field did affirm the research indicating that in-field susceptibility coincided with the ripening of berries to the critical 15° brix. Even where drosophila were found in fruit, the effects were not as great, with sour rot symptoms being milder. Spotted winged drosophila do seem to proliferate in humid conditions. Drier conditions pre-harvest seem to have greatly reduced the vineyard populations of SWD and the incidence of sour rot. Bunches have also maintained their integrity to a greater extent this year, last year severe splitting created ideal conditions for drosophila to reproduce and spread disease within the crop. Better management has also been a key factor, with growers switching canopy management regimes and using pesticide controls where appropriate.

It was interesting to note the occurrence of two-spotted spider mite and rust mite on vines in some areas of the country. Normally a pest on vines in warmer climes it seems that in hotter seasons this may become a pest to watch out for in the future. Moths were as ever a problem for growers this year, the second generation of light brown apple moth extended longer than usual resulting in an increased demand for protection. Monitoring flights of adult moths and treating around flowering remain key to controlling this pest and subsequent botrytis it causes.

Hopefully the warm spring this year has helped build good buds for next year and we have a similarly fruitful summer to look forward to yet again.