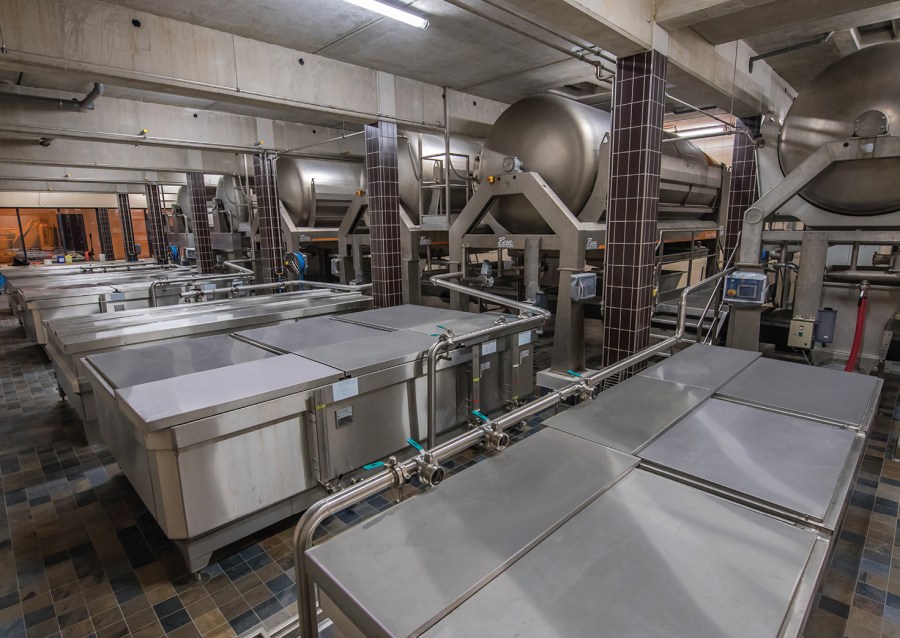 Socio-cultural developments have led to changes in wine consumption. Consumers are increasingly concerned by the composition of what they drink and in particular in the presence or absence of allergens, including sulphites.

Listed since 2012 on the list of allergens mentioned on the label (EU regulation 579/2012), sulphites have become widely stigmatised by the public. Although exactly equivalent alternatives do not exist, research has made it possible to isolate non-allergenic products that can be used to protect against oxidation. Vegetal proteins, authorized by the OIV since 2004 (from peas or potatoes), are now used as finings for musts and wines. Targeting oxidised and oxidisable polyphenols, they have become a good alternative to finings of animal origin (gelatines, etc.).

The mechanism of must/juice oxidation

Oxidation reactions occur at the point of harvest, once the grapes’ skin is broken, this juice becomes the target of oxygen. Phenol acids, naturally present in the must, increase in concentration as pressing continues. Enzymatic reactions then occur, such as polyphenol oxidase or laccase, in the presence of oxygen, caftaric acid oxidises to a quinone of caftaric acid. As pressing continues flavanols are increasingly extracted and a cross-reaction between the quinones of caftaric acid and the flavanols will regenerate the latter and lead to the formation of quinones of flavanols.

Grapes comprise several natural antioxidant compounds. Among these are glutathione (GSH) and ascorbic acid. The latter being in very small quantities, it is quickly degraded. Its dosage in the must is delicate as the molecule is fleeting. Glutathione will react with the quinones of caftaric acid to form GRP (Grape Reaction Product) blocking the cyclic reaction with flavanols. This plays an important role in the natural protection of juices. Sulphur dioxide is used by oenologists in the fight against oxidation. In its role as an antioxidant, it minimizes the formation of quinones.

Usually sulphur dioxide is added to the receiving vat in tandem with the pumping of the harvest. The dosages vary from 3 to 6 g/hl depending of the sanitary state of the harvest. The processing journey of the grape, from harvesting, transport to cellar, destemming and pumping results in a significant release of the juices from the pulp. The grape cells are large with a thin wall, so when the grapes arrive in the press, between 50% to 70% of the juice can be released from the grape on loading. This draining part has often been overlooked but is in fact essential to quality work and correct processing of the must. This significant draining of juice results in draining away from the press the additives that were introduced at the receiving vat. This is the case for SO2, that is released in the first flow of juices, consequently the pressing continues in the quasi-absence of any protection.

One of the strategies that can be adopted to remedy this loss of protection consists in fractionating the S02 during pressing. This can be done manually, by adding solid metabisulphite in the press during a final pressing. Pera-Pellenc has developed the Enoxy Plus system, to perform this operation automatically.

Studies were conducted on the Enoxy Plus System to verify the benefits. The study was conducted with IFV Midi-Pyrénées with results verifired by Nyséos. Colombard grape varieties from the same harvest were loaded into two 150 hl presses in the same manner. The pressing was carried out without protection for one, and with fractional injection of SO2 for the other.

The fractionation of SO2 showed increased volatile thiols 3-mercaptohexanol (3MH) and its 3-mercaptohexanol acetate (3MHA) in finished wines, clearly demonstrating a significant aromatic loss in the absence of protection in this study. In this study there was a significant improvement in juice quality by preservation of aromatic compounds. Glutathione (GSH) was also measured in the finished wines, in the absence of protection during pressing, the endogenous GSH is completely consumed, while it is preserved with the fractionation of SO2.

The Enoxy Plus System was also explored to handle the vegetal protein fining agents to replace SO2 use during pressing. The real innovation is based on very early fining happening at the very start of the press where the juices are just being released and will increase during the first pressing. Another study took place in Languedoc, on Syrah grapes. In the same manner two presses were loaded and the Enoxy Plus system with early juice fining compared to no fining juice, it was noted as a net benefit from early juice fining on the Syrah grape variety in Languedoc.

Tests, conducted in 2018 on Syrah in Languedoc with the early treatment of the juice, made it possible to obtain a wine with tristimulus coordinates : L* : 90.2 a* : 18.3 and b* : 2.5, similar to that obtained conventionally by fining at 40 g/hl of PVPP.

Finally, the analyses show a residual concentration of GSH on must before alcoholic fermentation of 40 mg/l, so that more than 65% of the concentration has been preserved. The injection of antioxidant solution as soon as possible into the press allowed a reduction in the amount of SO2 without loss of glutathione.

The aromatic potential is therefore preserved and the browning of musts avoided. This results in a reduction of 2.5 g/hl of SO2 . The results obtained are very satisfactory, both from an analytical and organoleptic point of view. They demonstrate the real relevance of this new use of plants’ proteins at an early stage such as the pressing stage.

The Enoxy Plus system, now adapted to the higher viscosity of this product compared to SO2, is a reliable technical solution – thanks to the ease of its fully automated implementation – by its early use, in that the juices are treated as soon as they leave the cells of the grape – by in-line fining, which lightens the tasks of operators in those critical phases of great sensitivity of the juices.

These very conclusive tests, carried out over four years ago, offer an alternative solution to limiting the doses of SO2. The use of plant protein helps preserve the aromatic potential of the grapes and also helps preserve glutathione.

Due to the early use, the doses of fining products are reduced, contributing to a reduction in costs, with a reduction of inputs quantity and SO2 doses, the new plant protein injection system meets the demands of the most exigent winemakers and in line with the organic processes.