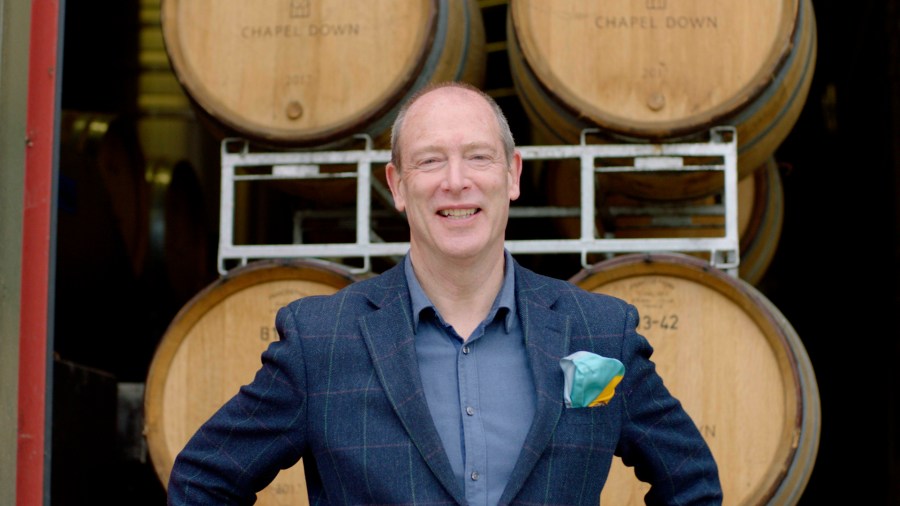 Recently retired as CEO of Chapel Down, Frazer Thompson steps down this month (April) as a board member of WineGB. Arriving from the beerage and Heineken he transformed the Kent producer into the giant of English wine it is today.

Frazer Thompson talks to Vineyard editor Christian Davis, who has known the 62-year-old since he arrived at Whitbread, when it was a traditional brewer, as a raw, marketer, with a Geordie love of beer.

The here and now?

“I’m the newly retired founder/ex-CEO of Chapel Down Group plc, England’s leading producer. I handed over the reins to Andrew Carter in November 2021, after exactly 20 years.”

Frazer and his wife, Sue, have three children and a grandchild. “I want to spend more time with them. We have a son in New Zealand who we have not seen for three years (because of Covid-19). We would need at least six weeks to visit him…”

He does however remain a shareholder and an ambassador for Chapel Down.

How did you get to be in the wine trade?

“I graduated in 1981 and, as a Geordie, soon wound up in beer at Whitbread. At 29, having co-led a team to acquire and integrate the Boddingtons brand and develop a successful strategy as a response to the then Government Beer Orders, I was made a director of Whitbread plc. I joined Heineken in 1995 as global brand director for the Heineken trademark. Based in Amsterdam, my global remit was to sell more beer, make more money and build long term value.

“I became CEO of Chapel Down in November 2001, having become bored with working for a huge corporate and becoming the sort of ‘turn left’ business executive I didn’t really like, marketing a product that was (at the time) unchangeable.

“Chapel Down gave me something to feel passionate and excited about. It wasn’t the wine trade that attracted me, it was the potential proposition of English wine and the chance to do something that could make a real difference. After 20 years to the day, I retired and passed the baton to a new generation happy in the knowledge that English wine is now firmly on the wine world map, and Chapel Down its major player.

How would you describe yourself?

“I’d describe myself as: ‘Retired and happy’, but still trying to go to bed a little less stupid than when I awoke.

“My performance reviews over the years consistently tell me I am seen as: ‘Engaging, charismatic, blunt, honest (not always seen as a strength, but rather predictably northern); creative (positive), independent (not necessarily positive), hard to manage (least positive), open, reliable.”

What do you love about the wine trade?

“The people who make wines happen. The growers, the winemakers, the commercial and financial teams who turn a humble grape into something special.

“It’s an act of enormous faith to try to produce something as unique, beautiful and uplifting as wine with God as your most inconsistent business partner.

“I also see the need for significant change in the industry and the opportunities that change can bring to companies like Chapel Down in the coming years.”

What frustrates you about the wine trade?

“The quantity of intermediaries between the wine and the consumer in the current traditional route to market model is staggering. Sadly the quality can be poor. Wine attracts a lot of people who have nothing to add, just opinion not fact, swagger, not style and rudeness, not charm. There is no substitute for ensuring that every wine must have its own story to tell and it must tell the story to the customer and consumer far better. Otherwise, it’s just another wine on a list. There are literally thousands of them.

“The enormous number of people and organisations between the producer and the consumer add huge cost, but rarely huge value. All will claim to be ‘passionate about wine’. Yet passion isn’t a word you should ever say of yourself. Earn it. Prove it. Live it. Excite others. Get others to say it of you. And always retain your integrity, humility, dignity and manners.”

If there is one thing you would like to do to improve things, what would that be?

“If forced: Duty should be paid where and when the cash is collected.

Secondly, please can we stop selling poor wine in pubs. Ranges are tight and poor because it ‘needs to be (cheap) £4-5 for a large glass’ or ‘because the consumer reads across to supermarket prices and might find the margins being made unacceptable’. They know that they can get two bottles of Peroni in Tesco for <£2. They don’t ask why its £6 a pint in the pub. They can buy 32 measures of Gordon’s gin for £15 in Tesco. They don’t ask why it’s £4 a measure. Why are we obsessed with serving bad wine just to reach an unsustainable price point or to be hitting % rather than cash margins? The on-trade only reject wine brands because of the ‘read across’. I still find that very illogical even now!”

This subject borders on a Thompson rant, particularly about the on-trade’s aversion to stocking wine brands. They are happy to embrace and consume when it comes to beer and spirit. “Do they seriously think producers such as Treasury and Gallo do not supply pubs and restaurants? They just create a specific brand, label but the liquid is the same.”

He goes on to say with a pub selling 1,000s of pints but only stocking five or six beers, why should an on-trade outlet extol stocking 300-400 wines? “There is a high degree of risk. They haven’t a clue. It is ridiculous, and makes no sense – and no effort to match the wines with the food.”

He goes on to criticise stemware. “You have badged beer glasses but wine gets sold in shit glasses.”

What is your opinion of English and Welsh wines?

“Improving every year. English sparkling wine, at its best, is truly world class. But look out for the best still white wines too. Some of them are already jaw dropping.

“But we need more distinctive and interesting brands emerging. We tend to live in our wee bubble and imagine everyone has heard of our brand. In reality, there are only two brands that even register with most consumers. Producers need to really start to spend on their marketing.”

What are they doing well?

How could they improve?

“Investment in time, people and marketing. This is a very young wine industry with lots of new and ambitious entrants (yet most have almost identical business plans). Time is irreplaceable. You can’t cut corners on people – and finding the right long term crew is mission critical.

And don’t expect the trade body to do your marketing for you. Be distinctive and please don’t bore people with middle aged stories of passion and terroir and living the dream…”

What is your favourite wine?

“My palate is fairly good, but I’m not in the top 1% who obsess about this. For me, enjoyment comes from the company with whom I am sharing the wine (I never drink alone), the story behind the wine (if there is one that’s different) the beauty of the environment (and the glassware) and the ability of the wine to ever-so-slightly raise an eyebrow. Rarely does my jaw drop now…

“In the latter category, which is vastly over-rated but where every wine critic spends their time energy and words – then English sparkling – especially a great blanc de blancs – will always do that. But if I’m trying to enjoy it in a bad environment with people I don’t much want to be with from a tasting ISO then even the best wines I will leave unconsumed.

1. English blanc de blancs – I have to say (Chapel Down’s) Kits Coty 2014, not only because I planted the vineyard but because it has the best story to tell and, to me, is the best tasting English sparkling I have ever had.

2. I remember a bottle of Rully Chardonnay I drank in Dijon with my wife in a restaurant as being extraordinary for all the above reasons. Chardonnay – Burgundian style – is usually delicious but has been also astonishingly expensive and disappointing on occasion.

3. I like crunchy reds – Grenache is a favourite, but depends entirely on the occasion. I was blown away by a Sine Qua Non Californian Grenache I tried at an American tasting I blagged my way into a few years ago, but was told it was $1,800 a bottle and I truly don’t think I would ever pay anything like that for a wine. My most memorable red was a glass of Haut Brion given to me by my law professor. It was unlike anything I had ever tried. Which wasn’t hard at that stage to a 20-year-old beer drinking Geordie.”