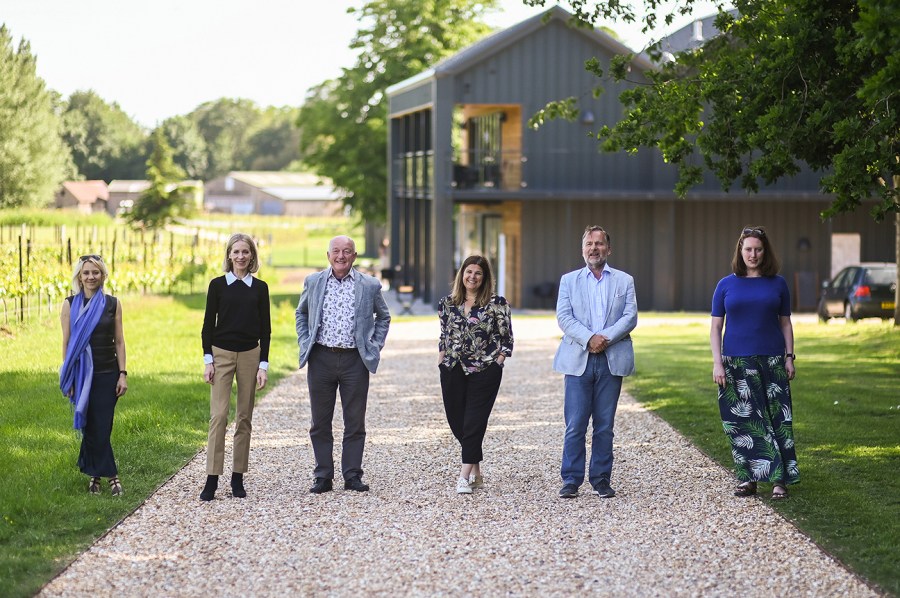 The WineGB Awards, the national competition for the English and Welsh wine industry, is organised and run by WineGB and highlights the winning styles of today. Awarded by top judges led by Susie Barrie MW and Oz Clarke OBE, the competition judging took place between 7-10 June at Ashling Park Estate who kindly provided the venue.

The WineGB Awards 2021 saw a record number of entries from all over England and Wales – from the smallest to the very largest in the country; including 24 new producers entering for the first time. Producers from Wales and nearly every county in England gained medals, signifying the breadth of winemaking skill across the UK and one of England’s smallest vineyards scooped a major trophy alongside the established stars in English winemaking.

Over 300 entries were received, with 37 Gold medals, 107 Silver and 131 Bronze being awarded. Of the entries 133 were sparkling and 176 were still, and of the total medals awarded, 126 (46%) went to sparkling and 149 (54%) to still. The Classic Method sparkling wine styles triumphed winning seven of the 10 trophies, but innovation in UK wine industry shone through with an impressive clutch of awards for a range of new styles and methods. In terms of vintage sparkling wines, 2015 proved to be the star of the show, winning nine gold medals.

The results illustrate the ever-growing quality, innovation and new talent in the industry as well as reinforcing some of the best-known winemakers in the ‘Hall of Fame’ of GB wines. Whilst Classic Method sparkling wines remained the hero style of the industry, the awards embraced a huge range of styles including still wines – which won medals across the board – and innovation shone through with new styles and methods appearing for the first time including Pet Nat (petillant naturel), canned wine and a wine produced in an amphora.

Commenting on the Awards, Co-Chair of judges Susie Barrie MW said: “2021 has been a great year for the WineGB Awards and undoubtedly our best yet. These Awards shine a light on the very best still and sparkling wines the UK has to offer and it’s wonderful to bear witness to an industry that is now consistently producing wines that really are world-class. Not only that, the range and variety of wines just keeps on getting better.”

Traditional grape varieties Chardonnay, Pinot Noir and even Pinot Meunier also featured prominently in the award-winning still wines in all colour categories. Bacchus also remained a popular variety earning 41 medals and a Trophy. Still rosé wines accounted for just under 25% of all still wine awards together with a trophy.

Two trophies have also been awarded: Boutique Producer to Sugrue South Downs (for the second year in a row) and Newcomer, which went to Yotes Court.

Another notable Gold medal win was an Ortega fermented with wild yeasts on skins and aged in terracotta amphorae for 10 months before being bottled without filtration, produced by Westwell in Kent. Further innovation in lesser-known varieties played their part with a Trophy-winning still rosé being 45% Merlot in the blend, a still red blend of Sovran and Cabernet Noir, and a 100% sparkling red Merlot.

Oz Clarke commented: “The WineGB Awards are one of the highlights of my year and this year certainly reinforced that; we had the thrill of encountering and rewarding even more styles, witnessing more innovation and discovering new producers, new names and new wines. I can speak for all the judges in saying that we’re all really excited about the potential that Britain is rapidly developing, and we saw it this year. You can only be at the birth of a new wine region once – and that’s where we are now!”

Top trophies still to be unveiled

The top trophies will be announced at the WineGB Trade & Press Tasting on 7 September, additionally celebrating the champions of each region, being the wines that earned the highest marks. Each of the category trophies announced will go head-to-head for Top Still, Top Sparkling and Supreme Champion. The winner of Winery of the Year (of which there are two awards: Contract Winery and Estate Winery) will also be announced in September.

The WineGB Awards is one of the most rigorous and respected of competitions. Judged by a leading team of experts from the industry, headed by Co-chairs Susie Barrie MW and Oz Clarke OBE, all wines are retasted if they are to qualify for trophies, which are only awarded to a category when the judges feel they are deserved.