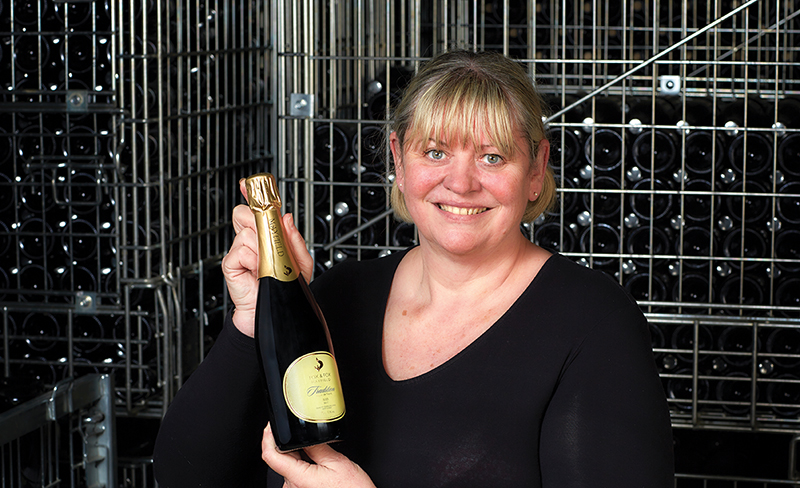 Over the past fifteen years, Fox and Fox in Mayfield, Sussex, has solidified its reputation as a grower-producer of highly acclaimed varietal sparkling wines. This month, having undertaken a rigorous six month business review, owners Gerard and Jonica Fox have unveiled a series of significant changes designed to further the development and growth of their boutique brand.

“After fifteen years of growing vines, owning and developing two vineyard sites, we wanted to be clear about what matters to us in the future,” said Gerard Fox.

While heavily investing in high-end tourism was one of the proposed business recommendations, the husband and wife team have alternatively chosen to focus their expertise and efforts on production and exports.

“Tourism is simply not something I am passionate about,” said Jonica Fox. “The reality is that we don’t have the right infrastructure for visitors and there are many other ways to be customer facing. Direct to consumer relations remain important, but we are instead looking at reinvigorating our website and online shop for our loyal and supportive private clients.”

Having decided that a cellar door offering wasn’t the right fit for their brand, when a passer-by approached Jonica to see if they would ever consider selling one of their vineyards, the couple began to consider their options.

“It wasn’t something we have previously thought about, so we approached Savills, who came back with a valuation and several interested parties,” she said. “We were really impressed with the calibre of people; they were serious buyers, including High Weald Wines, a new start-up in the area.”

The sale of one of its vineyards, known as Lakestreet, to High Weald Wines has successfully released substantial capital, allowing Fox and Fox to invest in new planting; develop relationships with local contract growers; focus on key export markets; and increase the quality of its already multi-award winning range.

“We have several partnerships in place with some Sussex growers who I know and love,” said Jonica, who will continue to use fruit exclusively grown in the county. “With one less vineyard to manage, I will have more time to share my viticultural knowledge with them, and this will also allow me to keep an eye on the quality of grapes we will then purchase for our wines.”

As well as buying in fruit, Fox and Fox will also be expanding production by increasing the density of vines in its remaining 1.5ha site, Hobdens Vineyard, which is currently planted with Chardonnay, Pinot noir, Pinot meunier and a tiny amount of Pinot gris.

“When we planted here in 2004, I had only just started at Plumpton College,” said Jonica. “The prevailing intelligence at the time was that vines in England would be very vigorous and that we would need a lot of trellis space. As vigour was a real concern, we established the vineyard with very wide spacing. Now, of course, we have realised that we can grow at a much tighter density.”

New vines will be planted in between established ones, giving a new inter-vine spacing of 80cm. Once new plantings mature, the vineyard, which is currently trained on a double guyot system, will be converted to single guyot significantly increasing crop yield.

Alongside increased production, which will allow the Sussex producer to better respond to market changes, the vineyard sale will also allow Fox and Fox to invest more in building a reputation overseas.

“It is important as a high-end boutique producer to adopt an agile approach to developments in the English wine industry,” said Gerard. “By making these changes and focusing our efforts on the making and marketing of our wines, we are able to build on their increasing popularity in Scandinavia, Hong Kong and other export markets.”

For the last five vintages, Fox and Fox has consistently be awarded high-calibre accolades in international competitions, such as Decanter, and production strategy will remain focused on creating a range of high-end, varietal sparkling wines benefiting from extended lees-aging, of at least five years.

“We want to make delicious wines which people want to drink,” said Jonica. “After ten very happy years’ making award-winning wine with our neighbour Will Davenport, at Davenport Vineyards, we needed to find more winery capacity to meet our ambitions. We have loved working very closely with Will, who shares our ethos, and have made some great wines together.”

From the 2019 vintage, Fox and Fox’s wines will be made in the new state-of-the-art winery at Bolney Wine Estate. Jonica, who will continue to take a hands-on approach to winemaking, is looking forward to working with Sam Linter and her well-respected team.

“Bolney have a very open door policy and that cooperative relationship remains at the heart of how we make our wines,” said Jonica. “Having recently tasted all of the base wines from our first-rate 2019 vintage, I am super happy with the quality. They are very true to the nature of what we have produced previously and we are confident that we will continue to make outstanding wines with the team at Bolney.”

In March, the boutique producer is also set to launch a limited-edition cuvée, personally blended by Gerard to reflect the grapes grown by Fox & Fox. Chairman’s Vat Brut 2014 has already won admiration in private tastings and is now available on request as a trade sample.