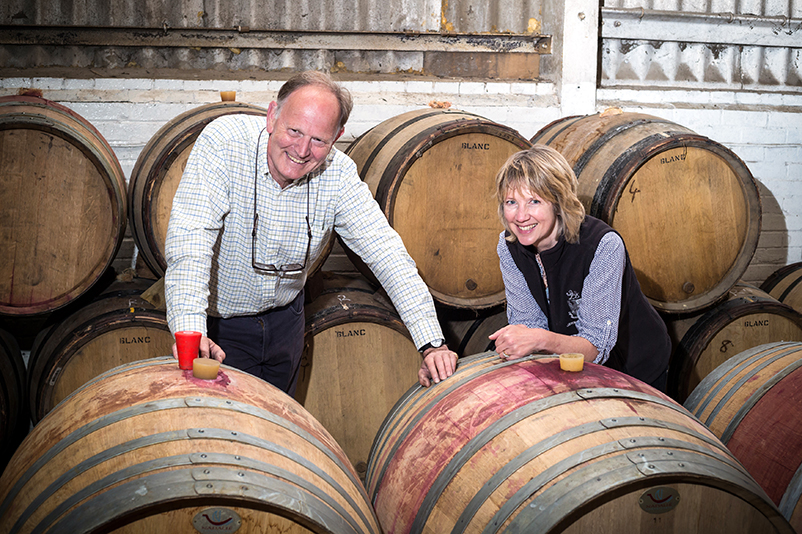 It is with great sadness that we must start the year with the announcement that Guy Howard, owner of Giffords Hall Vineyard in Suffolk, died on 26 December 2019 aged 62, following a short illness.

Following a career in the British Army, where he served as an officer in the Blues and Royals, Guy went into stockbroking and fund management in the City until his retirement in 2010. Guy joined Merrill Lynch in 1985 as a stockbroker and, specialising in Japanese equities, he subsequently worked at WI Carr and Warburgs before becoming a fund manager at Morgan Stanley. He established and ran funds at several independent fund managers and held director level posts for many years in both London and Asia.

In 2004 Guy and his wife Linda purchased Giffords Hall and together they developed the already established vineyards, reinstated a winery and built an acclaimed wine tourism business.

In the formative years, the Howards focused solely on contract growing for other producers, before moving on to having just 2,000 bottles of wine contract made each year. By the time Guy decided to retire from his career in the City, the estate’s rosé wine, which was one of the first English rosés to be made in a Provence-style and is a blend of Madeleine angevine and Rondo, was proving so popular that the Howards decided to take the business forward.

The estate’s annual production of 35,000 to 40,000 bottles is now carried out on site. The range of wines produced by Guy and Linda regularly achieve success in international competitions are sold both in the UK and overseas, primarily Japan and Europe.

I have had the pleasure of meeting Guy and Linda at various industry events over the years and also travelled to the estate in Long Melford for one of my editor’s visits, which appeared in the June 2019 edition of Vineyard magazine.

During my visit, Guy’s passion and enthusiasm for the English wine sector was visible throughout. It was clear that he cared deeply, not just about the development of his own business but of the industry as a whole. As well as speaking about his intentions to expand the vineyard by a further 15-acres and invest in more winery equipment, he was also concerned about the welfare of vineyard workers, the education of the next generation and was even thinking about schemes which could benefit producers across the UK, such as the establishment an oak barrel placement programme.

Keen to play an active role in the industry, Guy held the position of chairman of the East Anglian Vineyards Association, now WineGB East Anglia, and continued to be a member of its committee over a number of years. Having been a director of the United Kingdom Vineyards Association since 2013, he was one of the founding directors of Wines of Great Britain and served on the WineGB board representing the small/medium producers.

“Guy was a delightful man and one of the real stalwarts of the English wine industry, particularly in East Anglia, where for many years he chaired the local vineyard association,” said WineGB’s chairman, Simon Robinson. “As well as developing his own very successful vineyard business he was a fount of wisdom and common sense. Sadly, I only really got to know Guy through WineGB where his contributions to board discussions were always well considered, wise and helpful. Guy gave a lot of his time, skill and experience to fellow vineyard owners and winemakers in the English wine community and will be greatly missed. Our condolences go out to Linda and his family at this difficult time.”

In a statement sent out to members, the committee at WineGB East Anglia said: “The family will be having a private funeral service but plan to have a commemorative celebration of Guy’s life and achievements in the summer. He was such a great advocate for East Anglian wine and will be sorely missed by his many friends and the entire vineyard community. Our thoughts are with Linda and family.”