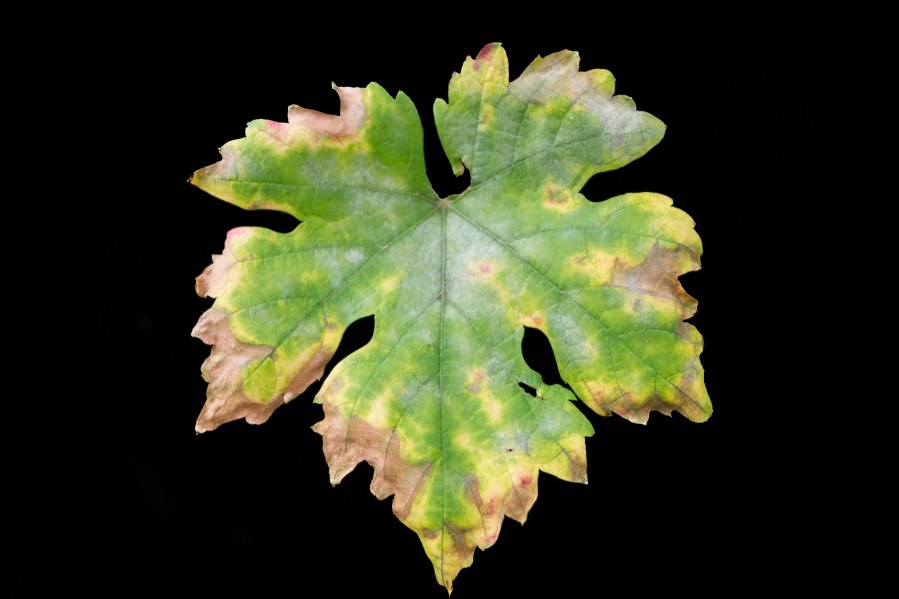 Project ‘BRIGIT’ is undertaking research to reduce the bacterial disease caused by Xylella fastidiosa becoming established in the UK.

Xylella fastidiosa, a bacterial disease which has caused extensive damage in American vineyards, has now established in Europe and threatens the UK industry.

Much has been written about the destruction wreaked by Xylella since it was found in southern Italy in 2013. More than 770,000 hectares of land in Puglia are now affected, millions of olive trees have been killed and the damage has been estimated to have cost Ä1.2 billion. The disease has also been identified in France, Portugal and Spain.

Xylella infects a huge range of host plants (more than 500 species) from herbaceous perennials to trees, including ornamental and crop plants, and native flora. Although olive has been hardest hit in Europe, globally the disease is most damaging in almond and peach, citrus, coffee and grapevine.

Grapevine was the first host of Xylella to be identified – the symptoms being described as Pierce’s disease in the late 19th century in California. The disease remains economically important, limiting the growth of vineyards in southeastern USA, and costing the Californian industry more than $100 million each year, from direct losses of vines and efforts to control the disease.

Xylella blocks the xylem of infected plants, impairing water transport and causing symptoms similar to drought in mid-late summer. In grapes these symptoms include: marginal leaf scorch, leaf chlorosis and premature leaf loss, “matchstick” petioles, irregular cane maturation, stem dieback and shrivelling of grape clusters. The infected vine may die within a few years. The disease is transmitted by insects such as leafhoppers and froghoppers (spittlebugs) that feed on the xylem contents.

Outside the Americas, Xylella has been identified in grapevine in Taiwan (2002), Iran (2014) and most recently on the island of Majorca in Spain (2017). This latter report is the first confirmed outbreak in grapevine in Europe and the disease has been found in almost all varieties and areas on the island. Disease incidence is estimated to be 7% but varies greatly, being much more common in organic vineyards. The economic impact on wine production seems modest, possibly because the insect vector is controlled through cultural practices. However, this shouldn’t lead to complacency; the introduction of new vectors can dramatically increase the impact of the disease, as seen in California when a new vector, the glassy-winged sharpshooter, was introduced in the 1990’s

Xylella is not in the UK but could be introduced through the importation of infected plants. The insect vectors are common in the UK and if Xylella-infected plants were imported, the disease could establish and spread, with serious economic, environmental and social consequences. The BRIGIT project (www.jic.ac.uk/brigit) has been funded by UK Research and Innovation (with support from Defra and the Scottish Government) to develop the knowledge required to reduce the risk of Xylella being introduced, to respond to interceptions and outbreaks, and to mitigate the impact of the disease were it to become established. The project is being undertaken by scientists in twelve UK research organisations led by the John Innes Centre.

Little is known about how the bacterium might spread in northern Europe as most research has been done in warmer climates. BRIGIT will develop new methods to detect and characterise the bacterium in plants and insect vectors and improve our knowledge of how symptoms develop. Research will be undertaken to better understand the biology of insect species that may vector Xylella. The project will generate models for local and national dispersal of Xylella via insect vectors and plant trade. The models will determine where Xylella is most likely to enter the UK and subsequently spread. The research will improve our understanding of the effectiveness of biosecurity measures and inform surveillance and control strategies. The project will interact with the public, industry and policymakers to ensure that the UK is ready to respond to the threat posed by Xylella.

In 2015, vines were grown on 3.36 million hectares in the EU and wine production was valued at Ä19.8bn. UK production is more modest but increasingly rapidly; the area under vines in the UK has increased by 160% in the past 10 years to 7,000 acres. To ensure the continued growth and profitability of the industry it is imperative that diseases such as Xylella are not allowed to establish. There is no cure for Xylella – the most effective strategy is prevention.