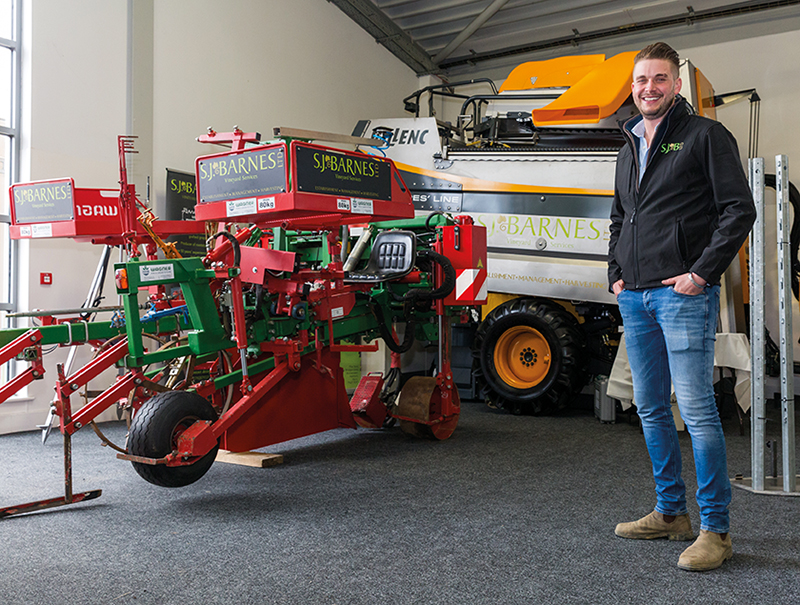 The annual agricultural business and machinery event, which was organised by the Kent County Agricultural Society and held at its showground in Detling, also played host to one of the WineGB vineyard managers’ forums. Participants gathered pre-meeting on SJ Barnes’ and NP Seymour’s joint stand to see the new machine on display.

The Wagner IPS-Drive, which is controlled by GPS, has been designed for high precision planting and is capable of measuring vine placement to within 2cm. Equipped with the latest technology and newest software, Sam Barnes and his team can now offer incredibly accurate site mapping, providing customers with vine and post requirement calculations to the nearest 10.

The machine planter will be driven by a JCB Fastrac, which Sam invested in last year to transport his Fendt Vario 210V tractor and viticultural machinery to the numerous vineyards which he provides mechanical contract management services to across the South East of England.

“The vine planter is incredibly accurate and simple to use once the field has been mapped pre-planting,” said Sam, who will manage planting-day operations, while his team drive the machinery and feed vines into the newly imported machine.

UK viticulturists with established vineyards should already be familiar with the Wagner IPS-Drive, manufactured in Germany by the eponymous family-owned company which has been making vine planters since 1976.

“My planter is exactly the same machine as the ones that have been brought in from outside the UK and I should think that every single vine, which has been established by machine in the last few years, would have been planted with one of these,” said Sam, who is able provide the same service as others at competitive prices.

The difference for Sam, however, is that by having a planter now based in the UK, there is more flexibility to plant in optimal conditions, with reduced pressure from not having to stick to a tight schedule.

“Having invested in the machine, there will be less of a rush against the clock to finish the planting season,” said Sam. “We will look at working from the end of April and into May, but if the weather happens to be poor, I can play it by ear and be completely reactive to changes as the machine will never be due to be sent back to Germany.”

With bookings from both new vineyards and existing producers who are expanding, SJ Barnes’ new mechanical vine planter is due to establish 250,000 in its first season.

“The industry is coming on leaps and bounds and is now large enough to support internal growth and development,” said Sam. “I really want the British viticulture sector to be able to sufficiently support itself without having to rely on overseas contractors and this was one of the main driving forces behind adding the Wagner to my fleet.”

Continuously reinvesting in his business for the overall benefit of the sector, over the last 12 months SJ Barnes has also added a state-of-the-art Pellenc grape harvesting machine and another Fendt Vario, a 211V model, to the line-up.

“It is all about future growth and helping the UK to reach a commercially viable status,” said Sam, who is now able to offer vineyard owners and managers everything from site preparation, to vine selection and supply, machine planting, trellis supply and installation, year-round mechanical vineyard management and grape harvesting.