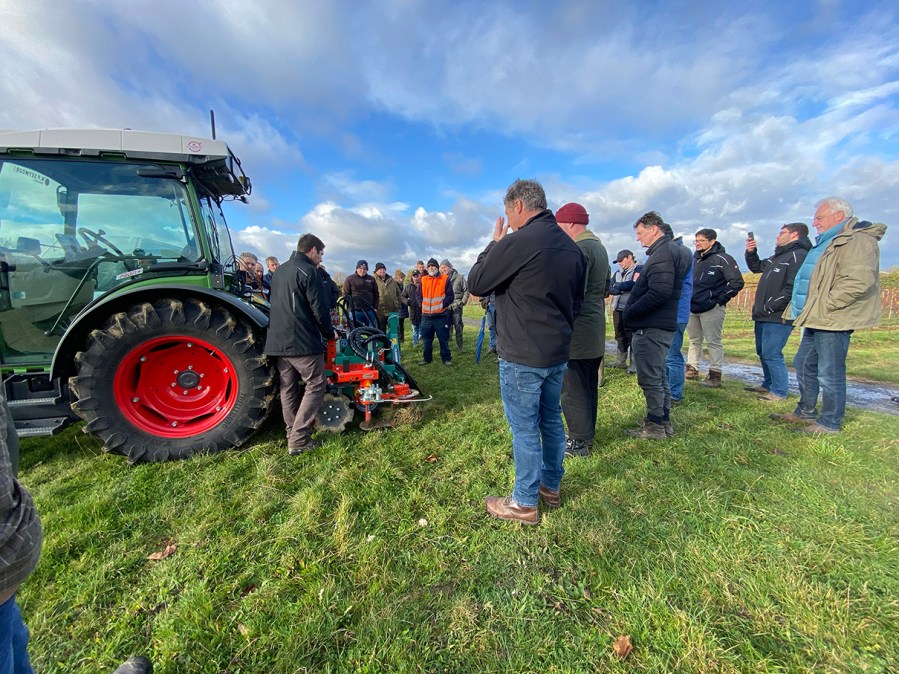 The results of an integrated weed management trial have demonstrated that mechanical weeding is just as effective as herbicide when it comes to vine health and increasing yield.

In a talk hosted at NIAB EMR on Friday 24 November, Flora O’Brien, from NIAB EMR, and Paul Tuteirihia, from Clemens, the manufacturer of the mechanical weeders used in the trial, presented the three-year IWMPRAISE project findings to the fruit and vine growers in attendance.

Part of a Horizon 2020 project to support and promote the implementation of IWM in Europe, the IMWPRAISE project trial was carried out on Chardonnay at the Kent-based facility’s research vineyard.

Data showed that compared to the control row, which received no weed treatment, both mechanical weeding methods (the Clemens Radius SL+ and the finger disk with finger roller) and the herbicide application positively impacted the health of the vine and yield.

In 2020, all weed treatments resulted in a yield 214%  – 247% higher than the control, and in 2021 this was increased to 261% – 292% higher. The study also showed that the difference between the mechanical and chemical treatments was marginal, thus dispelling growers’ concerns that moving away from herbicide would reduce yield. As expected, data showed a significant difference in vine vigour, and nutrition between the treated and untreated vines, this proving the adverse impact that weed competition has on vine growth.

Interestingly, the trial also found that the blade treatment, the Clemens Radius SL+, was the most effective in reducing biomass and impacted the greatest number of different weed families.

Following the presentation, attendees were invited to the research vineyard and orchard to see a demonstration of some of the Clemens machinery, which is imported and distributed in the UK by the specialist dealership, NP Seymour.

The first machine to be operated was the Clemens Multiclean. Attached to an over-the-row frame, the mulching brushes effectively help growers take the weeds back to ground level without interfering with the soil structure while also removing unwanted shoots and significantly reducing the cost of bud rubbing.

Next was the Clemens Radius SL+ which had been used in the trial. Attached to the SB Compact Frame, the Radius SL’s cultivator blades effectively undercut the topsoil and cut the root structure of the weeds, while the optional rotary tiller incorporates the topsoil.

Moving to the research plum orchard, fruit growers could then see the Clemens orchard frame with Radius SL attachment. This works in the same way but allows for inter-row widths of up to 3.2 metres.

“Mechanical weed control is still one of the things we get asked the most about, and it was great to see that the trial data has proven it to be just as effective as herbicide,” said Claire Seymour, Sales and Marketing Director at NP Seymour.

“Under vine cultivators are not a one-size-fits-all product. Modern systems can be incredibly sophisticated, so before choosing a make or model, growers need to think about what they are trying to achieve.

“The system on offer from Clemens is robust and comprehensive and has been built to suit growers who need to do everything in just one pass. It is designed to deal well with hardy weed, and vineyard managers often comment that the Clemens will do a more thorough job, with the effects lasting noticeably longer,” she added.

For more information on the Clemens range of under vine cultivation equipment, please contact NP Seymour on 01580 712200.