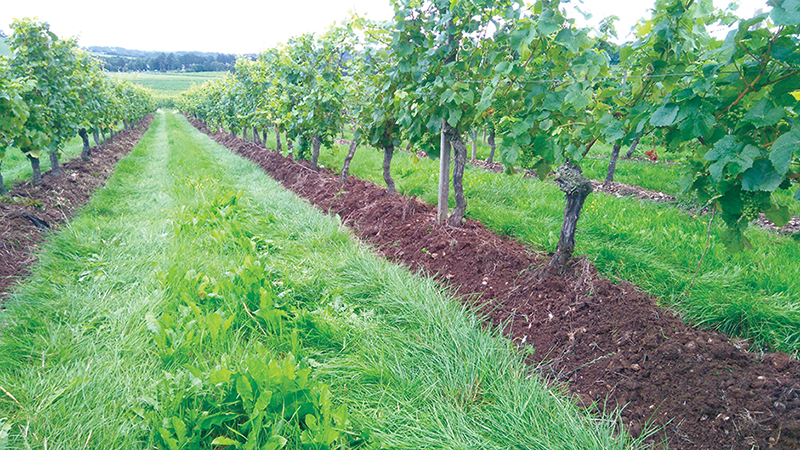 Most vineyard managers in the UK when asked what is one of their biggest challenges will have a strong four-letter word reply – weeds! Vineyard finds out if vines are happy sharing their space with weeds, and if not, how can weeds be controlled.

Weed management is generally considered one of the most challenging vineyard tasks. In the UK weeds and cover crops tend to grow continuously in our mostly damp climate whereas in many wine regions in Europe, and around the world, they die back during the summer due to the drier conditions. Herbicide options are few and becoming less acceptable and mechanical options are not always straightforward. Choosing a suitable method is dependent on many factors such as soil conditions, soil type and weed cover.

Vineyards in the UK are not generally short of water and are often planted on fertile soils – so is it possible just to leave the weeds in the under-vine area and tolerate a scruffy looking vineyard? This was the topic for a recent research project carried out at the NIAB-EMR plant research centre at East Malling, in Kent. The project, entitled IWMPRAISE, was funded by the EU’s Horizon research and innovation programme and initially led by Dr Julien Lecourt. Trials over several years looked at the impact of weed control on the yield and quality of the crop from their experimental vineyard. The trial used two different types of mechanical weeders and an herbicide treatment, in the under-vine area. The results were then compared with the untreated control area. The study measured canopy growth and the concentration of different leaf pigments, such as chlorophyll, to give an indication of the nutrient status of the vines during the growing season. Speaking at a WineGB webinar, Dr Julien Lecourt presented the research findings, with data and photographic evidence. It showed that the vines in the untreated trial, where the weeds were not controlled in the under-vine area, had reduced vigour and yield, whereas the vines where the weeds were controlled had more inflorescences per vine, an indication of yield. The results did not vary significantly with the different methods of control – mechanical or herbicide. Julien explained that weeding also reduces frost risk, lowers humidity and therefore reduces both disease pressure and competition for nutrients. It also “looks good, as the vineyard is a shop window for the wines!”

The majority of the methods for under-vine weeding are mechanical and tractor mounted, with options for different situations, size of vineyard and budget. Some only remove the above ground part of the weed, others cut the weed’s roots below the soil surface. Mulching is another method of supressing weed growth. There are also a few more unusual options including, flames, steam, sheep, geese and robots!

Mechanical weeders cultivate the area under-vine with specialist equipment that removes the weeds but does not damage the vine. With most methods experienced operators can clean up the weeds fairly quickly. However timing of mechanical weed control is crucial, in terms of the weather conditions, the soil conditions and the development of the weeds. Most work by cultivation aims to damage or bury the weeds or disrupt their growth but there can also be some disruption to the soil structure and to soil organisms.

Mowing keeps the weeds and cover crops under control and specialist equipment allows the inter-vine area to be mown. It is a relatively fast operation, there is minimal soil disturbance, but frequent tractor passes can cause soil compaction. The weeds are not killed so, depending on the weather conditions, will be back again in a few weeks. If weeds have become a problem or too high, N P Seymour recommends the Clemens Multi-clean. Known for its ability to take weeds back to ground level, made possible due to the mulching brush which effectively removes the shoots and at the same time control weeds in the undervine area without interfering with the soil structure. The Multiclean is particularly low in vibration and has extremely robust and smooth strings, which are gentle on the vines.

The Boisselet inter-vine weeder is a flexible modular system, whereby different attachments can be fitted to the frame, to suit the situation. These can be disc weeders, along with strimmers and inter-vine mowers. “With light soil you may not want to go too deep so the simple blade will work well. If you don’t want to disturb the soil you can just use the strimmer but as the roots are not removed the weeds will grow back – so I do usually recommend some cultivation,” explained David Sayell of Vitifruit Equipment.

The Rollhacke, from Clemens, is a disc weeder and can be adjusted for depth and angle to suit the situation and soil type. It can be fitted single or double sided and can also be used in combination with a finger weeder and blade.

Duncan McNeill, from McNeill Vineyard Management has now moved away from herbicides explaining that he wants “to perfect my management methods and be ready for when herbicides are not an option.” Duncan currently uses three or four different under-vine mechanical weeding devices depending on the soil conditions. “Unfortunately, there isn’t one tool that works all the time,” said Duncan. “I use a disc weeder, which is like the Rollhacke, but is single, rather than a double star-wheel, as I find it more adjustable, and I can drive it at speed covering the vineyard area more quickly. The Rollhacke with the finger weeder combination is good as long as the soil is not too moist, or heavy clay, otherwise both pieces of equipment can clog. The finger weeder is also good for knocking back the ridge that sometimes builds up under the row with the Rollhacke. I also occasionally use a strimmer, similar to the Multi-clean, to bud rub and knock back weeds.”

Along with weed control Duncan McNeill is finding that another benefit of under-vine cultivation it that it helps to preserve sub-soil moisture in drier years. “The top 5cm of soil will dry out, as it is being worked, but this then forms a barrier to prevent further evaporation by closing off the capillary tubes in the soil profile – essentially sealing in the moisture. In my region, Essex, we have had three dry summers in a row and where I have carried out under-vine weeding, I have seen less water stress. It seems counter intuitive, but it is something I learnt in Germany. Also I found, where I had used the strimmer and not cultivated, the green cover remaining under the vines was pulling moisture from the soil and causing water stress. This delayed ripening and we had poor leaf condition as well as poor canes at pruning.”

Duncan is not normally a fan of cultivation but explains that some light cultivation in the under-vine area is useful, “to help mineralise nutrients to make them more available and introduce oxygen.”

Mulch inhibits weed growth and germination of weed seeds by forming a barrier and also blocking sunlight. Mulch is commonly green waste but can be other organic material, such as wood chips, or grape marc. Alternative mulches can be made from plastics. Mulches, such as green waste can be a great source of nutrients and add organic matter to the soil but this also means they are a great source of nutrients and a perfect seed-bed for weeds. If the mulch is spread too thin the weeds will not be supressed. Spreading of mulches is also bulky, time consuming and therefore expensive. Synthetic weed mats are effective at suppressing weeds as are black plastics but the disposal of these materials needs careful consideration as it could have an environmental impact. The black plastic tears eventually, with pieces being carried by the wind to get caught in hedgerows – earning the nickname ‘witches knickers’!

Weed control using steam involves a tractor or trail mounted steam generator that delivers steam through nozzles, direct to the weeds – damaging the plant tissue. One of the benefits is that this does not disturb the soil or damage soil organisms, but it does come with a high energy cost. “Another problem with the steam system is that only the above ground part of the weeds is affected; the plant is not killed. Two or three weeks later there is as much weed growth as before,” exclaimed David Sayell.

Sheep are an increasing, and pleasant sight, in a winter vineyard. Winter grazing reduces the weeds, but sheep need to be removed before bud burst so that they do not eat the vine shoots. One benefit of grazing is that useful nutrient recycling occurs with their manure. Geese can be used similarly, but any livestock needs to be fenced and managed.

Some of the factors to consider when deciding on which weed management methods or which combination of methods to adopt include assessing the economic impact of loss of yield from weeds, along with understanding their contribution to biodiversity and soil health, their improvement of soil structure and addition of organic matter and nutrients. The decision on weed control may be influenced by the age of the vines, as young vines may be affected by competition from weeds, whereas older vines have a larger root system.

Manually pulling out the weeds or hoeing may not be an attractive option, but can be a cheaper method in a small vineyard. This method also has little environmental impact, avoids compaction and is good for fitness. The power-assisted hand hoe from Pelenc may be the perfect solution in a smaller vineyard.