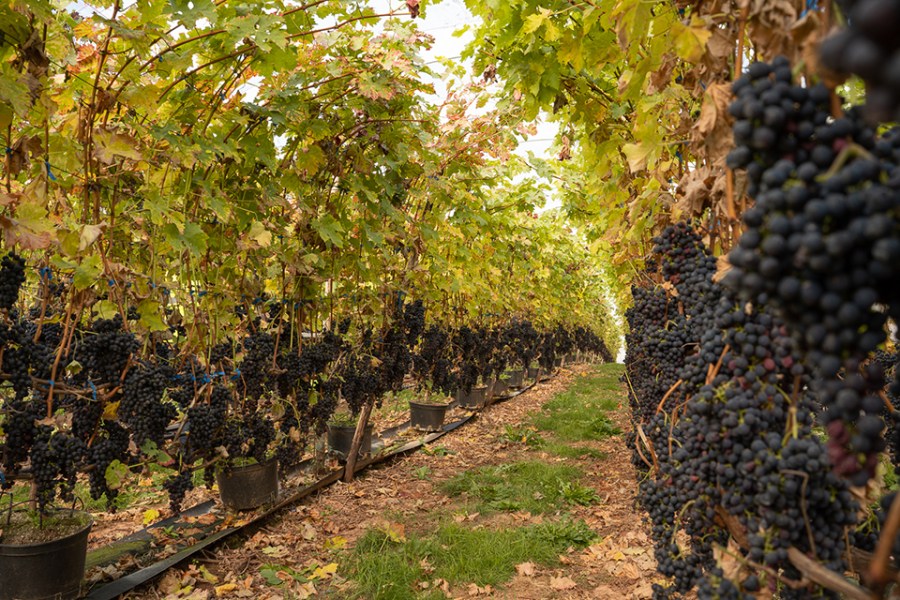 Haygrove Evolution, Herefordshire, opened its doors – or rather polytunnels – to a group of agronomists and interested parties on
2 November, to see the progress of their pot grown, fertigated vines.

A jungle of growth with a heavy crop of clean ripe fruit from a selection of varieties prompted discussions about producing wine commercially under polytunnels, as well as seeing how vines behave couped up in pots and living in a soil-less environment.

The vines are currently grown in 27 litre pots, in coconut coir and perlite free draining medium in steel framed, plastic covered polytunnels. Varieties include those more common to warmer climes such as Cabernet Sauvignon, Sauvignon Blanc, Gewürztraminer, Viognier, as well as Chardonnay and Pinot Noir. “All nutrients are supplied to the vines in solution by fertigation,” explained Haygrove Evolution’s Crop Technician, Cristi Marmandiu. “We control the pH to around 5 to 5.2, to maximise uptake of nutrients. We are still trialling different nutrient and irrigation regimes. As we have found that there is some dilution of flavours in the berry, we are considering reducing irrigation and fertigation from veraison, to see if this improves the concentration of flavours.” Cristi added.

“We are getting an average yield of 23 tonnes to the hectare equivalent,” commented Simon Day, Production Director and Head Winemaker, Haygrove Evolution. “We have very low disease and have not had downy mildew or powdery mildew – but with a heavy crop we have had some incidence of Botrytis. The open-ended polytunnels are high and the rows wide enough to use a tractor to spray, when needed. Another plus point is that we do not get any damage or loss of yield from late frosts,” Simon added. “In the winery we are making the wine in small batches. At the moment the varietal flavours are sometimes lacking, which is probably due a combination of the higher yields, berry dilution and softer, thinner skins – so there is still some work to do,” he said.

“At Haygrove Evolution we are focussed on innovation in fruit production and with these trials we are asking – is producing grapes under cover for wine commercially viable?” Commented Angus Davison, Chairman, Haygrove Evolution. “Production under polytunnel may supply wine producers with a reliable source of fruit or juice, to smooth year on year undulating yields, and provide blending components – augmenting the sugar levels, from outdoor grown grapes.

“We are looking at the advantages and disadvantages of growing under cover. So far, we have found increased yield and consistency in cropping, but there are large capital investments involved, even if the trellising costs are less. However, in the longer term, with a changing climate, this method of growing could be more secure,” commented Simon.

“Aside from reliability of production, it begs the question – could you ‘inject terroir’ to mimic the soil chemistry, such as in Burgundy, for pot grown Pinot Noir under cover?” Simon smiled.