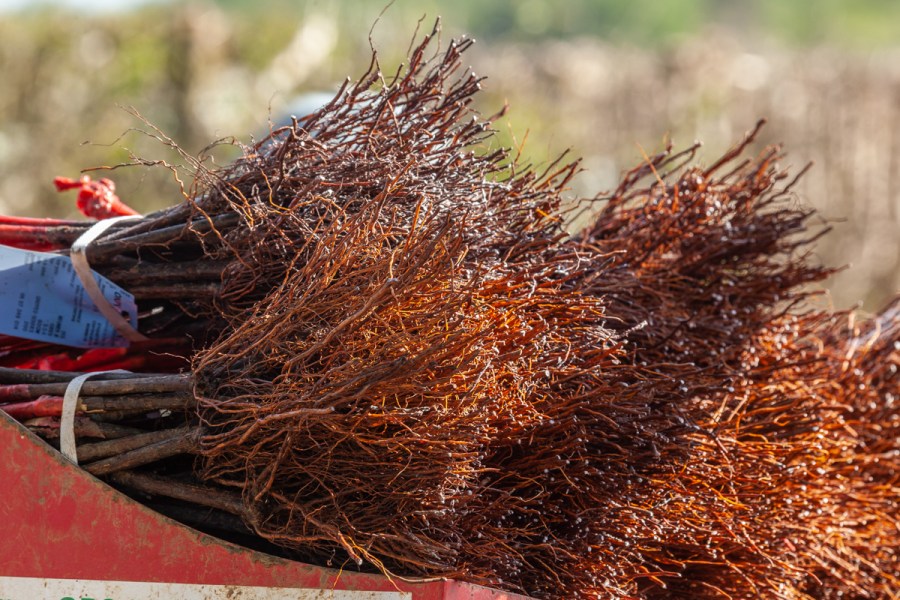 Planting season is approaching and getting young vines off to a good start is important for a future healthy and productive vineyard. The benefits of good mycorrhizal fungi associations with vine roots to support nutrient and water uptake are well known. Vineyard asks if inoculating with a root dip at planting helps early growth.

Viticulturists are increasingly aware of the importance of soil management to ensure healthy, active and diverse populations of soil microorganisms for the vigour and productivity of the vine. Research continues to reveal more about this unseen world. Martin Lukac, Professor of Ecosystem Science at Reading University explains: “It is possible to sequence the DNA of the entire soil microorganism population, and this shows that there are millions of species – the fact is that soil life is very complex.”

While plenty of soil bacteria and fungi play important roles in vineyard health and productivity, the arbuscular mycorrhizal fungi (AMF) are unique as they offer such a broad range of benefits. “These include nutrient uptake, especially phosphorous which is typically less available in the soil, moisture uptake, better tolerance of pathogens, as well as improved soil structure and aggregate stability. This is because the AMF essentially increases the soil volume that can be explored by the vine’s roots,” explained Professor Lukac. The larger roots serve to anchor the vines, but it is the fine ‘feeder’ mycorrhizal hyphae that uptake most of the nutrients. The roots and fungi have a symbiotic or trading relationship, the fungi supply water and nutrients and receive sugars from the vines in return. “The fungus establishes a structure, known as an arbuscule within the vine root which is responsible for the exchange, and this is linked to an extensive network of hyphae outside of the root for taking up nutrients and water,” Professor Lukac added.

Root dip or leave it to nature?

There are commercial products available that provide mycorrhizal fungi in solution for dipping the plant roots prior to planting, with the aim of providing an inoculation that will encourage colonisation of the vine roots. There is a cost involved with purchasing the product and the labour to carry out the dipping – but if mycorrhizal fungi are naturally present in the soil, are dips necessary and do they encourage a quicker establishment of a colony?

According to Professor Martin Lukac the decision to use a dip depends on the status of the soil. “If planting into healthy soil with established mycorrhizae species, it will probably make no difference. However, to use an extreme example, if planting into sand with practically no life, then the dip could make a huge difference. If the field to be planted has been permanent pasture and undisturbed for a while, then there should be lots of mycorrhizae species, but populations will be low if the land has been in arable production and the soil worked regularly. So, if the soil has been degraded by previous land use, then a mycorrhizal dip could make a difference.”

Duncan McNeill, Viticulture Consultant from McNeill Vineyard Management, looks after 15 vineyards in the East Anglia region as well as his own vineyard. “I used to always dip vines on the day of planting, even though it was such a horrible job and made such a mess. However, a while ago I started leaving some vines untreated after learning about the trials carried out by our vine supplier Volker Freytag at Freytag Nursery in Germany, and I have not seen any difference in vine establishment or longer-term production.

“In the trials carried out by Freytag it was found that, in many situations, the inoculated mycorrhizal fungi did not survive at the newly planted vine’s root depth. This is probably why I have not seen any difference in the treated verses untreated vines in the vineyards – so for this reason I have stopped dipping vines at planting.

“Mycorrhizal fungi are a vital part of the rhizosphere and incredibly important for the vine, so soil management must focus on creating a suitable environment for it to thrive. This includes increasing the organic matter and considering the rooting depth of the cover crop plants. Just dipping roots at planting does not mean that a mycorrhizal colony can establish.”

Paul Woodrow-Hill, Viticultural Consultant and owner of Vine Care UK stated that he discusses the matter with his clients before using a root dip. “I think the general consensus is that if planting into a field that had been arable and farmed intensively then yes, I recommend using a dip, but if the land is healthy and undisturbed then no. I do think that vineyard managers are under pressure to do everything possible to minimise risk to poor establishment, so they may be worried about the consequences if they don’t use a dip.

“At one vineyard where I worked, I did a bit of a field trial leaving a section of a vineyard untreated, whilst the rest had a root dip. I actually saw that the untreated vines did better than the treated. I assume that the fungi were taking the nutrients for their own growth.”

Will Mower, Vineyard Establishment Manager at Vine Works Ltd, does not generally use a root dip. “It is important to purchase good quality planting material. The nurseries we use treat the vines after grafting with mycorrhizal fungi before they are then field-grown. During this time they should establish an association with the mycorrhizal fungi. The vines are then selected and checked for quality, including the graft unions, before being transported to us. For this reason, we should not need to do a dip with a mycorrhizal fungi solution at planting.”

Stephen Skelton MW, Viticultural Consultant added: “In my view it is probably not worth using a root dip, but it does depend on the state of the soil and what has been grown beforehand. In fact, most of the good nurseries will have pre-populated the planting material with mycorrhizal fungi. Vine death is usually due to a graft failure, so the nursery should be ensuring a good graft union.”

Establishing a vineyard involves much business planning, logistics planning – and substantial finance – so it makes sense to ensure that the best growing environment is carefully created, both pre-planting and post-planting, to get the vines off to a good start for a healthy and productive future vineyard.

For successful establishment Duncan McNeill suggests deep soil preparation. “This will ensure that the roots are not meeting any resistance from compacted soil. This is the only time that I am in favour of deep soil cultivation, as it disturbs the soil micro-organisms including the mycorrhizal networks, which then have to be re-established. But initial root growth is critical as this increases leaf area. Increased leaf area and photosynthesis means increased root exudates, which are substances secreted by the roots into the rhizosphere that feed the soil microorganisms.

“After planting it’s best to avoid disturbing the soil as much as possible to preserve the microorganisms and keep the fungal hyphae networks intact. I have a new direct drill arriving soon for planting cover crops, which are of course beneficial to soil health, and this will avoid cultivation and soil disturbance.

Will Mower’s top tip for establishment is also good soil preparation. “The addition of organic matter, the correction of any nutrient deficiencies, and planting a cover crop beforehand if necessary, to improve the soil – even if it means delaying a year. I recommend using a reputable nursery, such as Freytag or Tourette. For the post-planting period weed control is vital. In my experience, it doesn’t matter if the vines are machine planted or hand planted, good soil preparation is the key.”

Stephen Skelton agrees that post-planting weed control is key to good establishment. “These small plants really do not want the competition.” Many vineyards use the tube-style rabbit guards, but Stephen prefers rabbit fencing. “I think the tubes create a warm moist environment and promote long internode lengths and weaker ‘hot-housed’ plants,” he said.

According to Martin Lukac there is little evidence on the persistence of the mycorrhizae species in the root dips. “It is likely that any population introduced could be out competed by species already in the soil. However, adding a dip is not going to do any harm – it may, or may not be beneficial depending on the circumstances.

“It is worth understanding that fungi perform better if the soil is slightly acidic – it’s a simplification, but fungi tend to perform better in acidic soils, whereas the more alkaline soils favour bacteria. Also, a good healthy soil mycorrhizal fungi population is good for locking up and protecting the plant against heavy metals such as copper.”