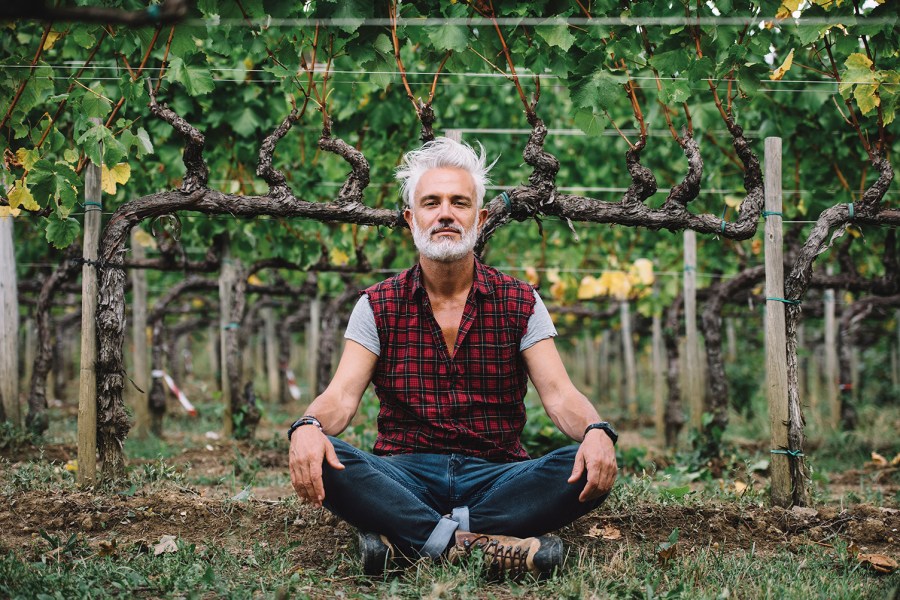 Marco Simonit grew up in his grandparents vineyard in Italy and many years later, after his studies, he observed that modern pruning methods were resulting in vine loses. Vineyard speaks to the pruning Master, Marco Simonit of Simonit&Sirch, to discover his philosophy of pruning that respects the vines natural growth habit to improve its health and productivity.

Marco’s early observation while drawing vines, led him to consider the injuries caused by pruning wounds and their effects on vines, so he decided to dissect an old unhealthy vine. “I went to a carpenter friend of mine and asked him if he could dissect it. When I saw inside, a large part of the vine was destroyed. A small part of the wood was white (alive), but most of the inside of the trunk and arms were brown and black with fungal infections – I was shocked,” commented Marco.

Marco’s work and travels then took him to vineyards in many regions in Italy and around the world. “Viticulture was changing, but I noticed that with these ‘modern’ methods of growing vines, after 20 years these new vineyards began to lose their vines,” he commented.

In 2003, Marco partnered with his agronomist friend Pierpaolo Sirch to create Simonit&Sirch, with the aim to educate viticulturalists in a different approach to pruning, a method that better respects the natural growth of the vine. “In its natural state the vine is a climbing plant, and needs space to grow,” explained Marco.

Simonit&Sirch are now known as the ‘Pruning Guys’ and their methods are starting to change many peoples view on pruning vines around the world. They have a commitment to research as well as a practical application in the vineyard. “Grapevine pruning is my passion,” explains Marco Simonit, “ My mission is to help grape vines live healthier and longer.”

Simonit&Sirch pruning method is based on four principles, and according to Marco these can be adapted to any variety, climate and form of viticulture.

1. Allow the plant to branch with age, to occupy the available space with the trunk and with the permanent branches

2. Ensure the continuity of sap and water flow

4. Use the ‘spare wood’ technique. Rather than cut close to a bud allow a small stub of wood as this will keep the dessiccation cone that forms behind the cut away from the main sap flow.

“Our main rule is branching – build a timeline of living wood: first layer, second layer, third layer and so on. This is to avoid blocking the flow of sap, which can lower the vines resistance to disease. As long as the principle of brancing is respected, vines can be machine pre-pruned,” commented Marco.

“One of the characteristics of the method is to create a chronology of wood that ensures constant fertility over the years, guaranteeing more stable production performance. The quantity of living wood and vascular functionality with better development of the branches helps ensure a homogenous and reliable yield, respect of varietal typicity, as well as a homogeneous ripening of the grapes,” he added.

Marco and his colleagues have observed that their pruning method promotes, “an increase in living wood over the years, with an intact and efficient vascular system, which allows the plant to have a longer life span than a plant pruned in a rigid and geometric manner. In addition, the accumulation of living wood over time allows an increase in the amount of reserve and nutrient substances. This, together with the individual genotype predisposition, allows the vines to adapt better to climatic conditions as well as being more resilient to pathological risks – in particular trunk disease. Numerous scientific researches have shown that the branching considerably reduces the impact of wood diseases both in its chronic and apoplectic form.”

“When plants unfortunately show symptoms of chronic Esca or even apoplexy, they are usually destined for eradication. We therefore decided to counter these practices with a surgical intervention and – after many studies and experiments – we have developed a dendrosurgery technique.”

Marco explains that it is a technique that they first experimented with in France. “It consists of removing the cavities that form under the wounds caused by incorrect pruning, precisely those through which the fungi penetrate and attack the wood, compromising the integrity of the vascular system.”

This dendrosurgery is not new explains Marco, “it was described by Ravaz and Lafon as a practice used since ancient times to eliminate decayed wood from Esca disease. Poussard used it at the end of the nineteenth century, cutting out the wood that had deteriorated by the action of fungi, with very encouraging results on 90-95% of the stumps. Therefore, ours is not a new technique, but rather the recovery of an ancient practice, updated and implemented with modern tools, such as chainsaws, to remove the decay.”

“To date, we have experimented with this surgery on over 10,000 plants of different varieties (Cabernet Sauvignon, Sauvignon Blanc, Chardonnay, Pinot Noir, Cabernet Franc) grown in different regions (Collio, Isonzo, Franciacorta, Bolgheri, Champagne, Burgundy and Bordeaux), with 90% of the plants operated on productive and asymptomatic,” he explained.

Last year Simonit&Sirch ran a Pruning School with Plumpton College, in East Sussex, which was attended by 15 vine growers from the UK. “We were ready to go ahead this year too, but we have unfortunately had to postpone. However, we are pleased to have just launched our online Vine Master Pruner academy, the details are on our website,” Marco added.