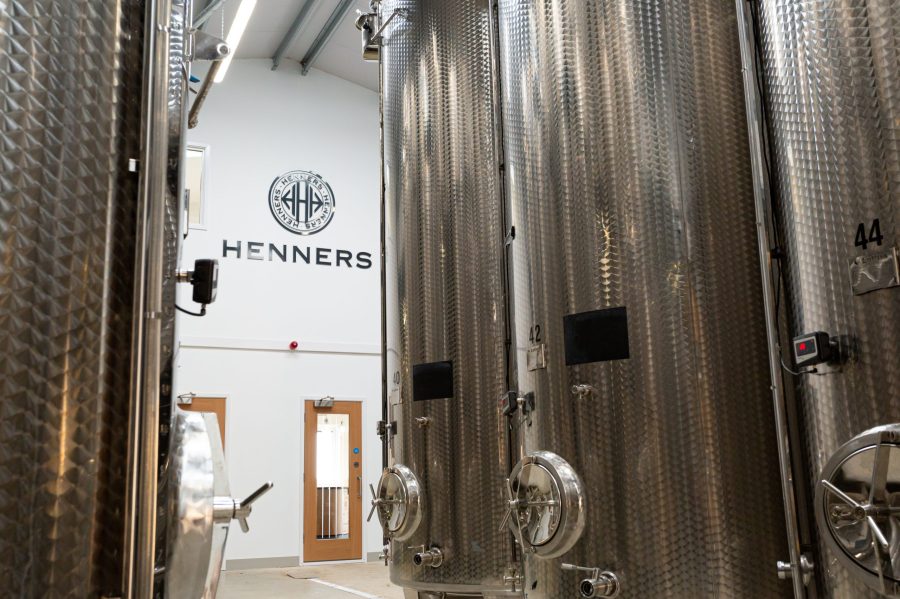 Henners may be quintessentially English but the name comes from a French nobleman and it is owned by a company with strong French and South African connections.  Christian Davis visits Herstmonceux in East Sussex

Henners describes itself as ‘quintessentially English’ yet it takes its name from Henners du Bois, a French nobleman who fled Paris during the French Revolution in the late 18th Century. Also, due to Manchester-based Boutinot Wines buying Henners in 2017 (see panel), it is part of a wider group of winemaking, including South Africa and France; with that, come winemakers with years of experience with whom it can collaborate, share knowledge, and ensure that the wines are international quality.

Henners is nestled next to the Pevensey Levels Nature Reserve and fewer than 4 miles from the sea in East Sussex, the vineyard was established in the pretty village of Herstmonceux, best known for its 15th Century castle and observatory, in 2007 by one Larry Warr, who claimed to be a direct descendant of du Bois. Planted with the three classic sparkling grape varieties, Chardonnay, Pinot Noir and Pinot Meunier, the vineyard claims to be in one of the driest, sunniest pockets of England.

The vineyard has a significant coastal influence, low elevation (24m above sea level) and free-draining clay soils making the site suitable for the production of both sparkling and still wines. Sea breezes are said to be key, minimising frost risk, reducing disease pressure and bringing a ‘crisp salinity’ to Henners’ wines.

In the winery, the team takes a non interventionist approach, made possible by the quality of the fruit. Henners has multiple clones and varieties planted to give it a broad palate of wines for final blending and play with reserve wines and oak barrels to contribute character, depth, richness and layers to the wines. The wines are fermented and bottled on-site with its small, dedicated team responsible for every aspect of production.

The Henners team plant Chardonnay to create the backbone and skeleton of the wines. Chardonnay is said to give the wines flavours of ripe lemon and the classic Henners freshness and zing. Chardonnay is often a grape variety that they associate with the long finish of its wines, and the continuing development of flavour and texture even after the wine has been savoured. Pinot Noir offers structure and body to the wines. As for Meunier, the team say this is them having most fun with these fruity grapes. Apparently, they are so delicious that, by the Autumn, you can eat them as table grapes. Meunier gives Henners’ wines their freshness, youthfulness, fruitiness, and approachability.

The Brut NV is the signature expression of Henners sparkling wine style. They balance the cuvee at around 40% Chardonnay, 35% Pinot Noir, and 25% Meunier each year, blending the wines across vintages and grape varieties to achieve the Henners house style year-on-year.

Collette O’Leary, Henners’ head winemaker, worked for PR agencies in London but after several years, Collette had a career change in 2010 and embarked on winemaking, graduating from Plumpton College in 2014.

Her winemaking experiences took her from California to South Africa, before joining the Henners team in early 2019. Collette oversees the day to day running of the Estate and all aspects of wine production at Henners.

She said: “The London Olympics made the Boutinot directors Michael Moriarty and Dennis Whiteley think about English wine. From 2021 Boutinot started to distribute Henners. Larry Warr, a direct descendent of Henners du Bois, who had planted the vineyard in 2007, was also involved with an engineering company. Operating both was not viable, so he sold the vineyard.

She goes on: “We are not prone to frost; it is warmer due to the sea. The English climate is so ‘variable’. We want to broaden our programme so we can work with the variability of the English climate. The Downey mildew was the worst it could possibly be last year – a difficult year. We have a uniquely humid climate. Cold and it can be so wet.”

On expanding production, Collette specifies: “We are hoping to nearly double production from 180,000 to 300,000 bottles. So, we are looking to new sites but Henners is the backbone of what we do. We are looking for two things: More growers long term and land for future planting.

“We have between five and 10 growers from traditional counties: Sussex and Kent, working with Essex and possibly Norfolk and Suffolk. We have not got anything from Hampshire but ‘never say never’.

“Still wines will get greater focus going forward,” she states. “We use smaller barrels and tanks for reserve wines and keep some on their lees in bottle.”

Hopefully, they have broken out their IKEA tools to erect the furniture.

The rest of the team

Will grew up in Suffolk and studied Horticulture before working at a vineyard in his home county and falling in love with viticulture.

Following his passion for winemaking, he started at Plumpton College in 2017, studying the BSc viticulture and oenology before graduating in summer 2020. Will has worked harvests in England and at Flowers Winery in California and joined the Henners team ahead of the 2020 harvest.

Sam joined Henners after coming top of her class at Plumpton in the Viticulture and Oenology BSc. She has a wealth of experience in wine, with vintages abroad as well as at home.

Sam is a keen traveler, with nine years abroad and 4 continents under her belt. When she’s in the UK, if she’s not in the winery, she’ll be playing hockey or cricket.

Rebecca has come on board to open a brand new Cellar Door.

Before moving down to Sussex, she was a hospitality consultant and wine educator in Yorkshire. With experience opening new venues, running events, and giving tastings, she plans to bring some real sparkle to the tours and tastings here.

Rebecca, said: “My role has been growing alongside the new building. When I came to Henners looking at opening a cellar door, there wasn’t even the barn. By the time I was up at Boutinot, learning the ropes, we had our fabulous and shiny new tanks arriving, the largest of which is 10,000 litres.

“I’ve seen Henners grow and expand. The furniture is coming out of its boxes, and the finishings are getting their final polish. Watching our little cellar door become a reality has been an amazing part of 2021.

“Our cellar door isn’t just about allowing people a sneak peak into our previously pretty private winery and vineyard grounds. It’s also about local community, sustainability, and building up eco-tourism in Sussex and beyond. As founder members of Sustainable Wines of Great Britain, we are proud that our winery and vineyard are both audited and certified sustainable, and our cellar door follows the same ethos, with electric charging in the car park and a water butt to reduce our water footprint.”

Based in the north west, Tom splits his time between Manchester and Herstmonceux. Having worked in the drinks industry during his early career, Tom moved on to spend five years working for Kellogg’s in the commercial strategy team, before swapping Cornflakes for cuvées.

Henners is a founder member of Sustainable Wines of Great Britain. Collette said: “The environment sits at the heart of what we do at Henners. We’re doing everything we can to promote sustainability and regeneration in our vineyard and in our winery. We’re working towards saving as much water as possible, ensuring any electricity we use comes from renewable sources, and pushing past the bare minimum to the best practice when it comes to soil health, winemaking practices, and even lighter bottles and packaging to reduce our carbon footprint.”

Custodians of the land

The Henners team consider themselves ‘custodians of the land’. The vineyard overlooks the Pevensey Levels nature reserve and the South Downs National Park, the area where the sea used to be. It is said to have a complex relationship in these marshy lands between what is water and what is land, and it has led to a special ecosystem, unusual habitats, and areas of great scientific interest.

Surrounded by the Weald and its clay, the coast with the pink pebbles of Pevensey Bay, the rolling green hills and oak trees, all compliment the wine.

Apparently some of Henners designs are inspired by Thomas Bewick. Born in 1753, Bewick was an artist/designer, historian and author who captured tiny wood cuttings of English countryside life. His designs inspired Henners’ Native Grace range, named for a line in his eulogy, written by Charlotte Bronte after he died in 1828.

Boutinot’s has been in the southern Rhône for 30 years. In 2010 it purchased a winery and vineyards above the village of Cairanne. Domaine Boutinot’s seven vineyards are planted with classic southern Rhône varieties: old vine Grenache Noir and Syrah, Mourvèdre and the more traditional Carignan Noir.

It has two bases in France: Domaine Boutinot in Cairanne with vineyards and a winemaking facility. Boutinot France further north in Mâcon is home to a production office and they oversee the production and bottling of a large part of its Made By Boutinot’ wines. It also has a facility in Franschhoek, South Africa where its Wildeberg (‘wild mountain’) is produced.