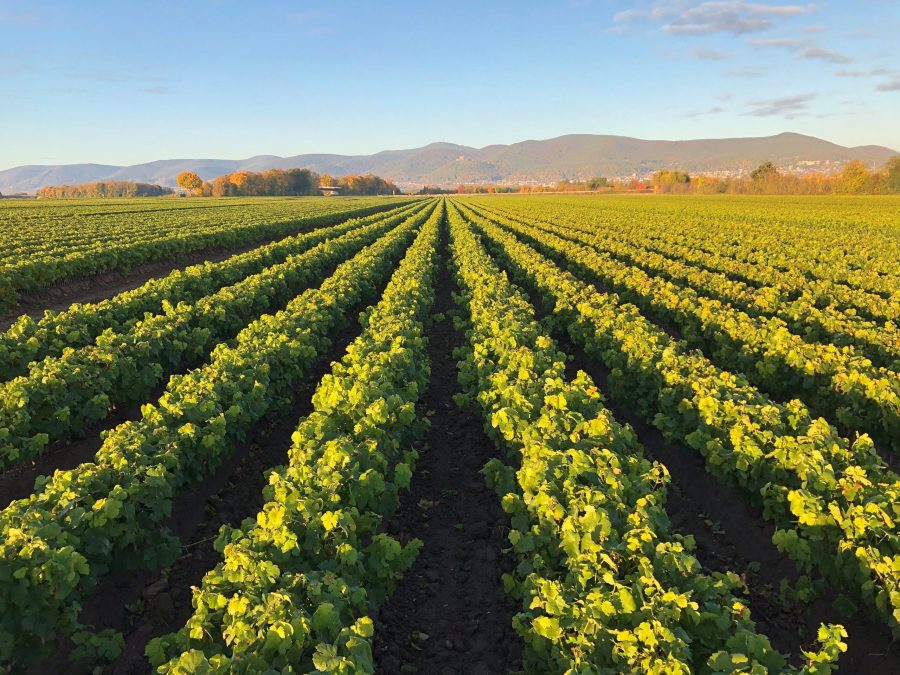 In the second of his series of a ‘A Day in the life of a Viticulturist’ series, Sam Doncaster at Rebschule Freytag, in the Pfalz region discusses grafting and handling.

Cane lengths of budwood get cut to short, pre-grafting, lengths

The quantity is calculated, and they are bagged in onion bags, briefly soaked in water and then get dipped in fungicide, bagged in an outer robust plastic bag, and stacked in pallet size boxes up to the ceiling in one of the cool houses.

They are all labelled on the inside, the outside, and the pallet box, additionally records are kept. This is all a similar process for the rootstock. The planning for a grafting season is difficult in itself, and that is without late orders coming in. This being the simple ‘phase 1’ of the nursery season.

There are many reasons why the grafting process can fail

First and foremost it has to be remembered that the activity that we will attempt, is to cut off the head of one species of plant, and to then replace that with another species.

Granted, they come from the same genus of plants, Vitis, but it is still a far from natural thing for the vine to ordinarily contend with. As such there is some ‘rejection rate’.

Then come the little handling accidents. Perhaps the graft process mis-matches material size, as people work very fast, (up to 10,000 grafts a day).

Next the handling while waxing the upper vine. Later packing vines in boxes in layers of peat, (for a period of warming, thus starting a repairing callous between the two parts) … unpacking of the boxes later, and another waxing.

Transfer to field, and planting into plastic sheet covered, ploughed and ridged soil, (with an irrigation pipe as well,)

Any little bit of rough handling will break the vine in these stages.

Overall, some nurseries are happy if they graft a million vines, but later only get to harvest 650,000 strong plants, as there are losses all the way through the process.

If we have orders for 1.3 million vines, for the following year, we therefore know that by now we need to have at least two million buds, cut up and prepared for grafting.

This intensive time in our season starts very soon

The time frame of vine nurseries is quite extensive in its variation, but also there is an intensity that runs for a long time.

A lot of this is driven by aspects of the weather, as indeed do most harvesting situations, but nurseries need to cycle their way through activity after activity to ensure that one action can follow another.

With more than 80 miles of plastic sheeting with an under irrigation dripper line put in as well, the soil has to be just right in moisture content, and then the connections to the main frame need aligning. Further to this the high stem vines need supporting trellis work put in…but only for one season’s use prior to it being up lifted.

Late Feb and March is grafting, packing callousing boxes, and then comes about three weeks of warm house and poly tunnel work sometime around April. This is followed by unpacking, re-waxing, delivery to the field and planting out for much of May. Then starts summertime weeding, tending to the irrigation, and putting on fungicide.

Vines close to the ground are exceptionally susceptible to fungal infections, where any heavy rains break open spore pockets and these easily drift onto the new, young leaves.

In quieter moments, it is as well to not forget the 10 hectares or so, of conventional vines that the nursery also holds for some budwood supply. (Remember them!) Mid Jan to early June, dawn to dusk and more, six days a week. Not for the faint of heart.

A lot to be attended to, and in many and varying aspects as well, but rewards of interest trickle back, and frequently.

People who come here to collect their cartons of vines, prior to the springtime planting season, frequently bring examples of wine that they have made. The wines that they like, that they are proud of.

We can say for sure what their soil is, what the rootstock is, the variety, the clone, the yield etc, so this adds additional interest.

I can say that I get to taste some of the best wines of their type, in the world.

Some of these wines inspire a visit to their winery, where maybe some cases are bought as ‘showing true varietal characteristics’, and to have examples in the company’s library of wines is a good thing, This enables the company to illustrate a varieties’ potential to future customers.

There are also several ongoing research projects, the Piwi wines etc, and other occasions to mingle with people.

Germans are a friendly, open, social and generous group of people, and they love a good party.

Focused wine tastings happen occasionally, often with a research theme, (Piwi for example,) but other events come around as frequently as we are free to break away from the daily endeavours. Lots to do here, with lots to be learnt.

Perhaps more to come back to, on future occasions.