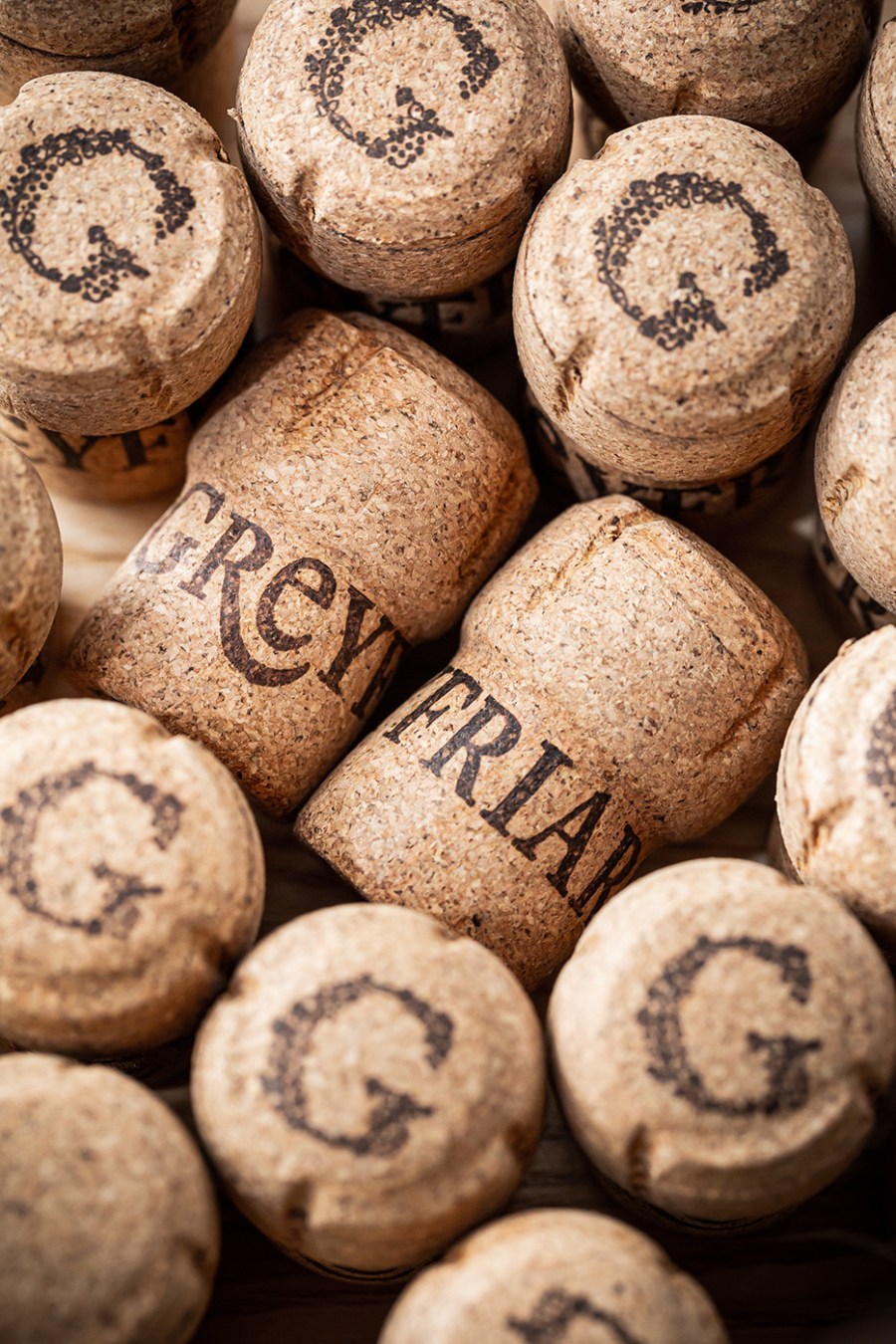 From North Sea oil to wine on the Hog’s Back in Surrey, Mike Wagstaff and his wife Hilary, have changed course in more ways than one. Christian Davis visits…

Mike Wagstaff describes himself as a: “Hands on owner. I’m not one to show up in tweeds at harvest time and ask, ‘how’s it going?’”

The sixty-year-old comes to vines and winemaking, via the oil industry. Educated as a petroleum engineer, he worked off shore on oil rigs for Shell during the 1980s. With that experience he then moved to investment banking, specialising in energy companies, working in London and New York. Mike then moved back into oil, starting up Venture Production, based up in Aberdeen, initially as finance director and then becoming the chief executive.

“After five and a half years, Centrica, aka British Gas, bought the company for £1.5 billion. We created more millionaires than Microsoft,” he quipped. “At that point, having commuted from here (Surrey) to Aberdeen, and been involved with big corporations my wife and I wanted to do something together, but less ‘corporate’. I have gone from a 600 mile journey to one and half miles – but we aren’t living on site, which is good.”

So how did he get from oil to wine? His wife had bought him a book on viticulture written by Professor Richard ‘Dick’ Selly, the well knownº, respected, geology lecturer at Imperial College, London, who is possibly best known for helping to convert Denbies in Surrey from a pig farm into the large wine producer it is today.

“The book stayed in my briefcase for five years,” said Mike. “He basically said: ‘You are 100-150 miles north from Champagne – and it is the same geology and, back in the 1980s, he believed that global warning was happening’…”

Greyfriars House nearby was built around the time of the First World War. It changed hands and the adjacent 30 acres were sold off to a vets’ practice. As an “eccentric experiment” they planted a vineyard. Mike described it as a: “Hobby done by enthusiastic amateurs with mixed results.” Chardonnay and Pinot Noir was planted. This was around the time in the early 1990s when there was just Nyetimber and Ridgeview making sparkling wines.

“The Hog’s Back is essentially the western end of the North Downs, running east-west with 15cm of scrappy top soil on top of south facing chalk – perfect for growing vines in this country. At the bottom of the vineyard it turns to clay on one side and sandstone on the other.”

The Wagstaffs moved in in 2010. The vets had sold the practice but kept the freehold on the vineyard. Then in 2009/10 with the financial crisis, they decided to sell that.

“We had bought the ‘house of our dreams’ and we then heard that the vineyard was up for sale.

Mike sums up his strategy as: “A small, boutique, commercial grower/producer focusing on sparkling wines – Grape-to-glass. Our aim is to produce amazing wines at an accessible price. In 2011, they planted more vines and then continued this every year to 2015. In 2013 they purchased another site nearby, making it 16 hectares (40 acres, of which the original Greyfriars vineyard comprises 40% and Monkshatch 60%.

He goes on to say: “We believe two-thirds of making great wine is done in the vineyard rather than the winery. We believe in low intervention, as little as possible. Let the fruit do the talking. But we’re not organic, let alone biodynamic. That would be an additional level of difficulty and risk – too much for me! We operate in a marginal, variable climate. My background has not been a lifetime in viticulture but we do wish to be stewards of the land.”

The original ‘hobby scale’ vineyard of 0.5ha at Greyfriars was planted in 1989 by our predecessors who were vets. What was interesting was that after a bit of experimentation they settled on Chardonnay and Pinot Noir which made Greyfriars one of the pioneer vineyards growing ‘Champagne varietals’ long before the current boom. They proved the quality of the site for growing grapes and we took over Greyfriars in late 2010 with the ambition to expand to become a boutique scale grower-producer of predominantly sparkling wine.

“We have been on the same mission ever since. We planted from 2011-15 and released our first wines in very limited quantities in late 2013/early 2014. Since then, we have expanded our range to nine sparkling wines and four still wines. Although still wine represents only 10% of our total production in a typical year, we have sold out of most of our still wines in 2021 – hence the increase in still wine production.

“We do everything from grape to glass which is important to us to keep control of the entire process in order to maintain quality and provenance. We will only make our wine with estate grown fruit since we believe that at least two thirds of a great wine is created in the vineyard,” he states.

The Wagstaffs’ ‘Lockdown Project’ was to create a cellar door tasting room. The swish room can take between 75-100 people with a function/meeting room that can accommodate 12-14.

“During 2020/2021 we have built a brand new cellar door tasting room which we are very excited about and we have seen a huge increase in our wine tourism business despite the limitations of lockdown. We are looking to further expand our tours/tasting offering over the next couple of years.”

Being a shrewd businessman, Mike can see the opportunity for developing wine tourism but definitely not any sort of permanent restaurant operation. Again too much hassle, too much risk, too many people need to be employed. He prefers inviting food trucks, delivering the likes of pizza to Greyfriars as and when they have events. He is planning more diverse events such as cocktail evenings, cheese and charcuterie. He is contemplating buying a horse box and converting it into a bar for outside events. Speaking of outside events; a local yoga studio, desperate in lockdown, conducted its yoga and pilates classes on the decking overlooking the vineyard.

The Zeitgeist being people enjoying our hospitality outside with family and/or friends, socially distanced. Being safe.

“I reckon we are the closest vineyard, of any significant size, to London and we are a 10 minute taxi drive from Guildford station. That is important,” said Mike.

Greyfriars is one of only three producers making Sauvignon Blanc in the UK but it’s a varietal that is challenging to ripen in England. Vineyard and Daily Mail columnist, Matthew Jukes, recommended the Greyfriars Sauvignon Blanc 2020. The 2,000 bottles sold out. The 2014, 2018 and 2020 were “amazing” but the 2019 went to produce a sparkling Sauvignon Blanc (known as SB). 2021? “We’ll see. It’s still going through malolactic.”

The first wines were a sparkling rosé and a blanc de blancs. Greyfriars’ best-selling, flagship wine is its vintage Sparkling Rosé Reserve. “We cannot make enough if it,” said Mike. He is about to release the sixth vintage from 2018.

From 450 bottles in the first year, production is now up to about 11,000 bottles. The wines have won various IWC and Decanter gold medals. Apart from the cellar door, Greyfriars’ wines are available through about half a dozen local Waitrose stores, plus the Oxford Street store and online. We also distribute through an increasing number of local stockists and wholesale nationally to the on-trade.

As to future trends, Mike stated: “As our vines have matured, the quality of the fruit has improved and we are becoming more experienced with individual sub-plots within our vineyards.

“We are seeing a significant increase in demand for still wine especially from the cellar door and post Covid-19. As a result we have increased our production of still rosé by threefold over the last three years. We have also planted an additional 1Ha+ of Pinot Gris/Pinot Blanc in 2019 which should start producing significant quantities of fruit from 2022 onwards which will also allow us to significantly increase our still white production.

“We have also seen an incredible increase in demand for our pink wines both still and sparkling. Sales have tripled over the last three years and it’s no longer just a seasonal summer drink.”

So, what’s planned? “We launched our first still wine blend in 2021 (our 2020 Noor), which is a blend of Pinot Gris and Chardonnay which has been extremely well received and commemorates an interesting bit of local history. We are also planning to launch the second vintage of our trophy winning Cuvee Royale to celebrate the Queen’s 70th anniversary on the throne.

“Our Pinot Noir seems to be at the heart of our best wines (both white and pink) despite the well reported difficulties of growing it. We are seeing a definite trend for significantly increased demand for both pink wine and still wines, which has accelerated since Covid-19.”

He concludes: “We do everything from grape to glass which is important to us to keep control of the entire process in order to maintain quality and provenance. We will only make our wine with estate grown fruit since we believe that at least two thirds of a great wine is created in the vineyard.

“Our winemaking has gone from strength to strength as evidenced by our trophy in the 2021 WineGB competition and yet another gold medal for our vintage sparkling rosé in the IWC.”