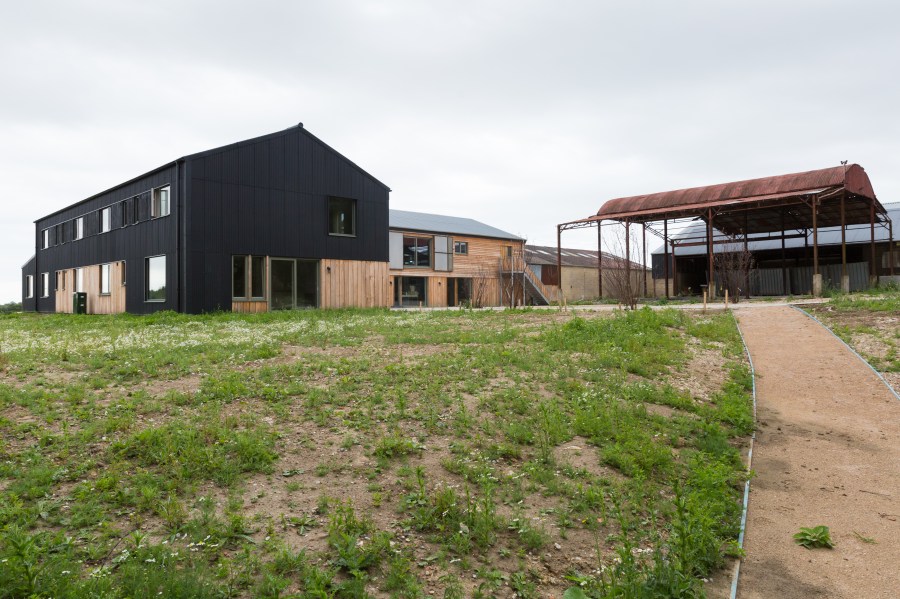 For over 20 years Ben Walgate dreamt of starting his own vineyard, but zero prospects of inheriting an already established estate, combined with a career in the wine trade which “isn’t very well paid”, led him to question “how on earth it was ever going to happen”.

“The biggest challenge is always the shear amount of capital involved,” said Ben, “depending on the size of the vineyard, millions of pounds are needed to purchase suitable land, plant vines and wait for the vineyard to come into production.”

Fortunately for the Lincolnshire-born lad, after six year’s fronting someone else’s English wine project, in 2017 the opportunity to set up his own vineyard and winery finally presented itself.

Nestled deep in the East Sussex countryside, just outside the village of Peasmarsh, sits Dew Farm. The 100-acre pasture and woodland estate, which can trace its history back to the 14th century, not only enjoys over 35-acres of suitable viticulture land, but its rolling views down to the historic Cinque Port of Rye and a collection of redundant agricultural buildings ripe for redevelopment made it the perfect place for a new producer to envisage a thriving vineyard, winery and tourism offering.

After going into partnership with the landowner, Viscount Devonport, who Ben describes as “equally as visionary, supportive and responsible for the success of the whole enterprise”, in 2018 the first 10,000 vines were planted. With an additional 26,000 established in 2019, the total area under vine now stands at 20-acres.

The classics – Chardonnay, Pinot meunier and Pinot noir – can all be found on site, but the six different vineyard parcels are also home to a wonderful collection of varietals, from traditional Germanics, such as Ortega, Dornfelder and Regent, to obscure names including Manzoni Bianco, Trousseau, Chenin blanc, and Pineau d’Aunis, which Ben believes has a “really bright future” in England. There are 21 varieties in total, some with just 100 vines and others with up to 7,000.

While waiting for his own vines to come into production, Ben was keen to make a start on his new brand, Tillingham, named after the river valley which the estate overlooks, and he is using these formative years to work with as many different grapes and natural winemaking techniques that he can.

“This year we will be releasing 17 wines. I am experimenting probably more than I should be, but we are playing with techniques like carbonic maceration, skin contact and pét-nats. By using all manners of production methods, across all manners of styles, these wines are a way for me to figure out what I want to do in the longer term when our vineyards come into production,” said Ben.

From the current range, all but one of the wines has been produced with a mix of conventional, organic and biodynamically farmed fruit, bought in from a range of “exceptional” growers located across the South East of England.

Ever since 2003, when he founded an organic and biodynamic wine importers, Ben has been utterly committed to growing grapes and making wine in the most sympathetic way, harnessing everything already provided by nature, without unnecessarily adding chemicals.

The winery facilities at Tillingham are certified organic and since taking over the land Ben has also focused on implementing biodynamic practices, and a Victorian oast on the farm will shortly see its drying room revamped and put to good use as a space for the preparation of biodynamic vine treatments.

“I have been thinking long and hard over the last two years about becoming biodynamic certified with Demeter, but the only clear motivation for me to do this would be to prove to people that we are farming in a certain way,” said Ben. “I don’t think it expresses enough about our specific practices and as our vines are only one and two years old, we have a lot of work to do to figure out how we can tailor our method of farming to our site.”

Regardless of Tillingham’s accredited status, the land, wines and overall business model will all be run in-line with Ben’s personal philosophy which centres around collaboration and a diverse, considered way of farming.

“We are farming with elements of biodynamics and making wine naturally, but I don’t do that just to help sell the wine,” said Ben. “Very few people appreciate this. From the start I wanted to be very clear that Tillingham was going to be something fundamentally different and I think that is why the wines have been so well received.”

Abstract artwork, the ability to feature under the trendy natural wine category and the chance to talk about fermenting grapes in traditional Georgian Qvevri, it is unsurprising to hear that a lot of Tillingham wines are sold in quirky wine bars. For Ben this is more of a timely coincidence than a targeted marketing approach.

“The wines are different, but that’s because my approach to English viticulture and winemaking is different,” said Ben. “I was very lucky that, as someone who has always wanted to produce natural and biodynamic wine, when I started Tillingham, it just so happened that the natural wine movement was starting to explode. That was serendipity, it wasn’t about chasing a concept or a new market.”

Producing wines which resemble nothing else on the UK home-grown market, Ben knew he needed a label which consumers could respond to. After visiting several leading drinks brand agencies, who all wanted “an obscene amount of money”, Ben finally met with contemporary and fine art designers Eva Kellenberger and Sebastian White at Kellenberger–White.

“This was my one chance to start with a completely blank sheet of paper and to really get it right,” said Ben. “There is no brand name on the label, there isn’t a vintage, and in most cases, grape varieties, no cuvée names, because the wines are about more than that. Eva and Seb had never done anything on a bottle of wine before but there was something that felt so right about it.”

The design for the first wine, the 2017 Pét-Nat, PN17, was screen printed directly onto the glass, and while this was “fraught with hassle”, the end results were impressive and Ben attributes the brand’s maiden success to the bottle’s visual appearance as well as what’s inside the bottle.

“Visually it was so unusual it went viral with people putting it all over Instagram. We didn’t need any press releases or traditional marketing to launch Tillingham, people took pictures of the wine, spread it across social media and it all kicked off from there. The endorsement and exposure you can gain from someone with 50,000 followers saying that Tillingham is the best wine they have ever tasted is hugely influential,” said Ben.

This was not just a one off 15 minutes of fame; the hotly anticipated sequel ‘PN18’ has already sold out and the global influence of social media has also led many leading importers to Tillingham’s doors, and the wines are now exported to eight countries.

“The wines are not produced in big quantities and because they are special, small batch releases, they are really sought-after by customers,” said Ben. “I know a lot of people investing in English wine think they have to make over one million bottles per year to get a valuable return on investment, but our business model is very diverse and this hasn’t been designed as a monster venture.”

While Ben intends to produce just 100,000 bottles per year, the winery is theoretically capable of producing 500,000 and so to support other organic producers and very local growers, Tillingham is already providing a full crush to cork contract winemaking service, with space for new clients from 2019 onwards.

“Contract winemaking is never going to be a big side of the business,” said Ben. “We are taking a very diverse approach to running the estate. The land not suitable for vines is used to graze sheep and cattle, we have chickens and will be getting some pigs next year too. We are leasing a walled garden where we grow vegetables and I truly believe that we are one of the only producers in England to embrace a completely connected, diversified way of farming.”

This estate-grown and reared produce will soon be sold through Tillingham’s on-site restaurant, which is due to open in September along with an impressive 11 en-suite bedroom boutique hotel, with shared lounge-kitchen space, two additional wet rooms, tasting room and pizza prep area, which will eventually tie in with the traditional pizza oven being fitting into one of the courtyard’s additional redundant agricultural buildings.

“Tourism is an essential way of creating revenue which will help to support the establishment of the wine business at Dew Farm,” said Ben. “It is not just about the turnover from the hotel rooms, the restaurant covers, or the vineyard tours; rather than selling wines through a distributor at a lower price, selling a considerable percentage straight to the consumer for full margins, also improves the profitability.”

To complete this ambitious wine tourism project, Ben appointed local architect Derek Rankin at RX Architects in 2017. As well as securing planning permission, the team have managed everything from conception and construction through to completion.

“The brief required a creative approach to reuse existing buildings, draw in the stunning surrounding landscape, and reference the rich heritage of the site,” said Derek. “The design is based on collating all the different elements of the winery around one central landscaped courtyard space. A variety of materials have been utilised such as raw steel, profiled concrete along with natural and painted timber cladding finished with simple robust detailing to reflect the farming heritage. Large galvanised metal and timber doors have been restored and carefully positioned to slide back and reveal framed views from the courtyard to the vines and countryside beyond.”

With works carried out by Cube3 Construction, the new facilities have seen the conversion of the estate’s redundant hop processing barn, and while the exterior for the accommodation block was reconstructed with a high-performance timber frame, Ben has been keen to keep as much of the original detailing as possible.

“What I love about the whole project is that there is this very clear historical narrative,” said Ben. “The oast, where the Qvevri are buried dates back to the 19th century, the restaurant interior is an open, industrial style, true to what the buildings have previously been used for, and then the rooms are very modern in their design. It all helps to tell a story.”