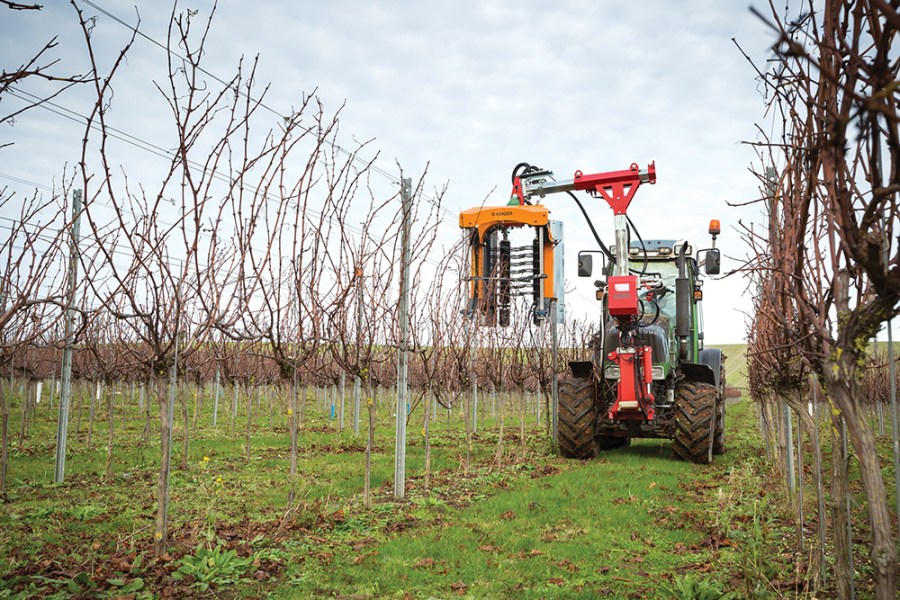 Winter pruning is probably the most important, most expensive, and most challenging task in the vineyard year. Vineyard looks at cutting the cost with mechanical pre-pruners and a new product for protecting pruning wounds from grapevine trunk disease.

In a cool viticulture climate, such as the UK, winter pruning is particularly important as the vine has to have the correct crop load, one which it is able to ripen during the length of the growing season. Getting the bud numbers right will help save money later as canopy management and maintaining vine balance will be easier, correct shoot positioning and density will aid disease management, and reduced shading will allow for better bud development and potential fruitfulness for the following season.

Pruning vines in the UK has traditionally been done manually, is a major vineyard operation cost and relies on the availability of a skilled workforce. Many wine regions have turned to mechanical pre-pruning to save costs in time and labour. Considered to be more suited to spur pruning methods, many cane-pruned vineyards in the UK are now trialling mechanical pre-pruners with encouraging results.

“The machine can leave canes long, if needed, giving options for the final pruning, such as providing sacrificial canes in the event of a late frost, or allowing the time to prune later,” explained Sam. “The savings are made on the reduced time needed for pulling out, as the machine removes about 20% to 30% of the wood – especially those annoying wispy ends and tendrils!”

Rathfinny Estate, East Sussex, is one of the first to use the mechanical pre-pruning service from Sam Barnes, of SJ Barnes Ltd. Vineyard Manager, Cameron Roucher, is trialling the machine on just under 60 hectares of the older vines. “I have used pre-pruners many times previously in Australia and New Zealand, but this is the first time here. The aim is to remove the tops of the canes, about 40-50cm, those that have grabbed hold of the wires with tendrils,” commented Cameron.

Simpsons Wine Estate has also tried out pre-pruning on 30 hectares, removing 40% to 50% of wood.  “We are not sure of the cost savings as yet, we will have a better idea at the end.  We have left a sacrificial cane, which we will hand prune later,” commented Darryl Kemp, Vineyard Manager. “The cost of the machine may be out of reach for smaller operations, and soil compaction could be an issue on some sites, but for me pulling out is less arduous and the consistency of cane length which allows tying down to be faster and more consistent,” Darryl added. “There are many advantages including speed, cost, ability to delay pruning. It could also be a good option for small vineyards as well as larger, as you are better able to allocate labour,” he added.

David Sayell from Vitifruit Equipment has a ‘try before you buy’ policy, “it’s a lot of money to spend, so I want people to have a go.” One of the first to try the Provitis pre-pruner is Tony Purdie from Yotes Court Vineyard. This is the first year that Tony has trialled pre-pruning in the vineyard and selected the Provitis barrel unit as he already had a suitable mast attachment. Tony is following the gentle pruning method of Simonet and Sirch, whereby minimal cuts are made to the vine and the emphasis is ensuring continuous sap flow. “Mechanical pre-pruning doesn’t go against the Simonet and Sirch and can still be used. Initially our young vineyard was trained to single guyot, so mechanical pre-pruning would not have been suitable, as we would not have been able to keep enough cane length, but now we are converting to double guyot I am able to try out pre-pruning,” explained Tony. “With the pre-pruner the time and labour saving is huge! Pulling out the canes can be a least half of the labour cost, so by going through with the pre-pruner we are lightening our labour requirements, but I will still be using some contract help. I will add up the costs of winter pruning when we have finished but I reckon we have saved a quarter on our bill,” he added.

Whatever pruning methods are employed, cuts to the vine have to be made and this leaves wounds open to infection and susceptibility to Grapevine Trunk Diseases (GTD). GTD are a major cause of vine death and cause a reduction in vineyard productivity across most wine regions of the world. Wound sealants used in the past have lost approval for use due to potentially harmful ingredients and are now illegal.

However, trials have been taking place to use natural fungal species such as Trichoderma, to colonise the wound and inhibit the growth of the pathogenic species that are among the causes of GTDs.

On 20 November 2020 a new product, Vintec, received full regulatory approval and is now available in the UK for use on vines. It is a biological fungicide containing Trichoderma atroviride (strain SC1). The manufacturer, Belchim Crop Protection, claim that once applied there is no harmful residue and a favourable beneficial and environmental profile. “It is the only Trichoderma species derived from a woody species (hazelnut in Northern Italy) so ideally suited for rapid colonisation within the vines. It is supplied as a natural endophyte which establishes well within the vines, whereas other Trichoderma are derived from soil colonies,” explained Alan Horgan, Horticultural Specialist with Belchim Crop Protection. “Vintec should be applied at an optimum temperature of 10°C  and ideally there should be no frost or rain for 48 hours following application. Vintec offers long season protection with only one or two applications required per year, initially after pruning then a second application, if required, up to flowering. Felco has a specially adapted manual secateur model which can apply pruning wound dressings, such as the new Vintec one, on the go.

“Grape Trunk Diseases are a recognised problem but the availability and suitability of products for treating GTDs effectively has been sporadic and something of a stop-gap, up until now. In Vintec we have a well-researched, fully approved product with known efficacy, and which is also accommodating to our regular pruning practice. A true bio-fungicide (with ‘seek and destroy’ capability) specific to the pathogen, friendly for both the user and the environment,” commented Julian Searle, Viticulture Advisor, Agrii.

“Grape trunk diseases make vineyards unproductive (ultimately killing vines) and losses of 4% per year can soon add up. This isn’t a panacea for all GTDs but a management tool to keep productivity up. Increasing the vines life span increases vineyard sustainability. There has been no approved product to deal with wound protection in the UK for over a decade so the arrival of Vintec is definitely overdue. A number of overseas nurseries that I work with are taking up the product in the grafting process as they feel it enhances control of asymptomatic GTDs,” added Chris Cooper, Viticulture Advisor, Hutchinsons.