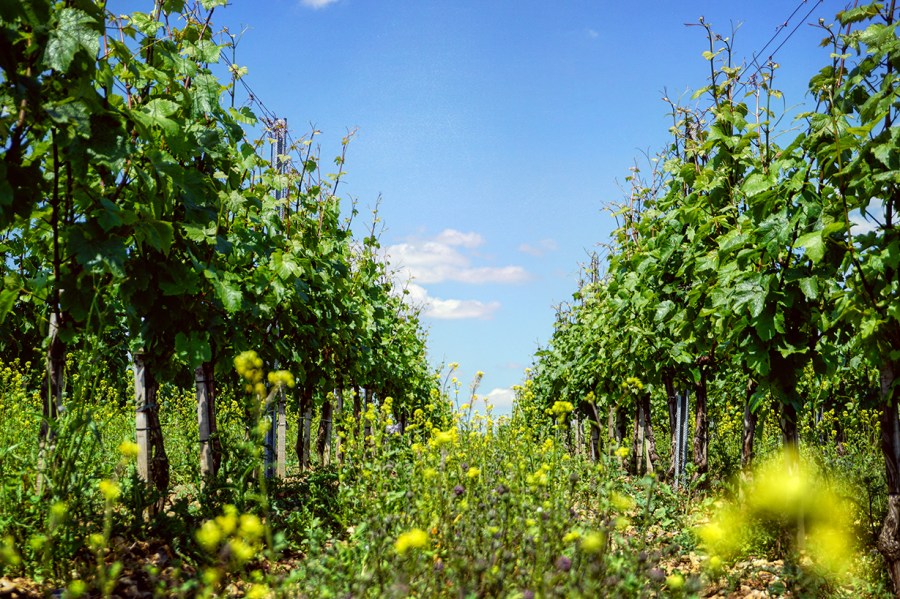 Vineyards can have a very positive influence on the environment as the crop is off the ground allowing the land under to become a biodiverse ecosystem. Vineyard finds out how cover cropping can help biodiversity, support carbon capture, improve soil health, assist drainage, suppress weeds and become little havens of wildlife.

Traditionally grass has been used as a vineyard floor cover and it does provide some benefits to soil health – but there is more that can be achieved, for both the vineyard and the environment with a well-managed mixed cover crop.

There is now an increasing interest in establishing cover crops in UK vineyards as positive tools for vineyard management. Done well, cover crops provide an environment that will enhance the breakdown of organic matter, soil aeration and nutrient cycling. Cover crops increase the number of above ground organisms as well, by providing food and shelter for beneficial insects and other invertebrates. Every vineyard site is different and so, as with most things in viticulture, there is no one size fits all solution – and a vineyard manager needs to decide on the aims of the cover crops and any concerns it can address, such as vigour, water, disease or nutrition.

Harrow & Hope, in Marlow, Buckinghamshire is 6.5 hectares, planted 10 years ago with Chardonnay, Pinot noir and Pinot Meunier. Co-owner Henry Laithwaite’s main reasons for planting cover crops are for weed control, to provide some competition, and to feed the soil. “We have been using a winter cover crop for the last four or five years and have never used any herbicides. As we are now in the process of conversion to organic viticulture, we are focussing a lot more on our cover crops. We cultivate the winter cover crop in the spring to plant the summer cover crop. Last year we used phacelia, mustard and daikon radish, but this year we will include some grasses and black oats. This is because we found that last year most of the plant species finished flowering and seeded just before veraison, which meant that there wasn’t enough competition during the ripening period. This year we hope that the black oats and grasses will grow up when the other species have done their job.”

Initially Henry cultivated the vineyard, but he found that “without any weeds or plant cover, there was no competition, and the vines were too vigorous, even in a hot summer. We also realised that every time the soil is cultivated it losses carbon, and our aim is to sequester carbon.”

Cover cropping is not the easiest way to control weeds admits Henry, “you are introducing more vegetation to work with so it’s probably far easier to cultivate – but this releases carbon – so the hard work is worth it. We keep the under-vine area clear using a Clemens inter-vine weeder, but we will probably experiment with low, slow growing cover crops for the under-vine area in the future.”

For Henry, “another reason for cover cropping is that the vineyard looks amazing! Purple flowers from the phacelia, yellow and white from the mustard and radish – and the level of insect activity is through the roof with such a lovely buzz as you walk through the vineyard. The vineyard may look untidy, but I love the wilder look.”

Simon Porter, a conservation farmer is the co-founder of Penn Croft Vineyard in Hampshire. Simon explains that the three rules of regenerative cropping are, “to keep the soil covered at all times; to minimise soil disturbance; and to use diversity of cropping, to improve fertility and create a healthy environment for commercial crop production – so that the least amount of plant protection products is needed. Our five-hectare vineyard has not been ploughed for 19 years or cultivated for eight. When I dig the soil with my spade, most people cannot believe it. That was why we insisted on planting the vines by hand and not using a machine.”

Simon aims to improve soil fertility through increasing organic matter, “which allows improved drainage as well as improved drought tolerance. We also believe that the roots of the cover crop will help drive the vine roots deeper into the soil thereby helping the health of the vine. Clearly improved fertility can help a ‘hungry’ vineyard, but a cover crop can also be used to draw up any excess fertility if this becomes a problem,” commented Simon.

Using a cover crop for weed suppression, through natural shading and competition, is also important at Penn Croft. “We also place the cover crop cuttings in the under-row area as a mulch to kill weeds around the vine at certain times of the year – but this will depend on the fertility levels of the soil at the base of the vine,” Simon added.

To feed the soil organisms Simon uses a variety of species in his cover crop, “to provide the nutrients and sugars that fungi, microbes and mycorrhizae need to be active. A complete and undamaged mycorrhizal network below ground should assist in the transfer of nutrients from the soil to the plant roots.”

“Our mixes have included mustard, linseed, phacelia, clover, beans, radish and oats. Clover and beans are to bring extra nitrogen, linseed and oats are good for deep rooting, mustard and phacelia can bring organic matter and help with carbon storage. Many of these plants will flower and attract insects that are natural predators to vine pests,” said Simon.

In Simon’s view the secret with cover cropping is flexibility and not to follow a set procedure and plan. “It is about adapting to the current needs and requirements. We have been growing two crops a year and so we plant in April when the ground is warm for a quick emergence. That crop will be replaced by early September so that a new cover crop is established before any ground gets too wet. We either cut and swathe or cut and leave in place the old cover crop, or it may be left to desiccate naturally by winter frosts. By using a disc drill we can drill through a lot of remaining debris. If needed and at the right time of year we could consider spraying it.”

Simon uses direct drilling for planting the cover crop, which is not yet common in UK vineyards. “We use a John Deere 750A direct disc drill at 3m wide. We planted our vines wider for various reasons including this. We compensate for the wider rows by using the Scott Henry system. One contractor I know is slowly gearing up for direct drilling cover crops designed for the conventional row widths for UK vineyards.”

Gusbourne Estate’s vineyard manager, Jon Pollard, has tried quite a few types of cover crops over the years at their 93 hectares of vines in Kent and Sussex. “At the moment it is not something we are doing in a big way as I don’t believe we have the best equipment to establish a cover crop without doing a fair bit of damage to the soil structure in the first place. The one bit of kit that I think we would be able to make real progress with cover cropping is a direct drill so we can do just one pass, saving a lot of time and money and maintaining or improving the soil structure. It seems crazy to me to rip up an existing cover to establish another,” explained Jon.

Jon’s aims for cover cropping are “to increase the biodiversity of the soil microbes, to improve drainage, help decompaction, add organic matter as well as promote nutrient scavenging in the winter. Where we cover crop, we use daikon radish and mustard in the winter between the wheelings and the root zone as the deep rooting varieties help with decompaction and drainage. In the past we have sown phacelia, cereal rye and common vetch, to produce biomass which we mow and discharge under the vine to increase organic matter in the vine root zone. I think moving forward I would concentrate on winter grown covers in isolated problem areas – and leave them as long as we dare into the spring – in order to yield some decent biomass for the growing season. In the past we have used chicory in a couple of wet patches of a low-lying vineyard in an attempt to dry it out and reduce vigour of the vines. This was limited in its benefits, but would look to try again in the future,” added Jon.

Jon is also looking at increased insect activity with cover crops in the hope of lowering the use of plant protection products. “I have still to see this effect at Gusbourne but have read plenty about this and would love to achieve this,” he added.

John Buchan, an agronomist specialising in viticulture, advises clients across the country on all aspects of vineyard agronomy, including cover cropping. John says that, “the choice will be dictated to a great extent by the soil type, as the species will need to be matched to the soil type.” For nutritional benefits we can look at clover, vetch, rye, lucerne and sainfoin. If the soil structure needs improving, I suggest deep rooting grasses like cocksfoot, or herbs such as chicory, ribgrass and yarrow,” commented John.

If a vineyard is over vigorous and needs some competition to help achieve a better balance, John usually recommends, “Italian ryegrass, black oats and stubble turnips. Cover crops that provide ground cover for weed suppression are usually a mix of mustard, clover and creeping red fescue,” commented John. “It is also possible to establish cover crop species that can be harvested and made into compost teas for folia application, to help control diseases and add nutrients – particularly for organic and biodynamic growers,” he added.

Top tips from John include, “always identify areas in your vineyard that perform differently and research why this is. It may be an issue of excessive growth, or drainage or maybe disease. When this is understood it is then possible to establish differing cover crop mixes to deal with the issues. And of course – it’s important to make sure that grass and cover crops are mown very short during the frost season,” John added.

Advantages of a cover crop

Challenges of a cover crop