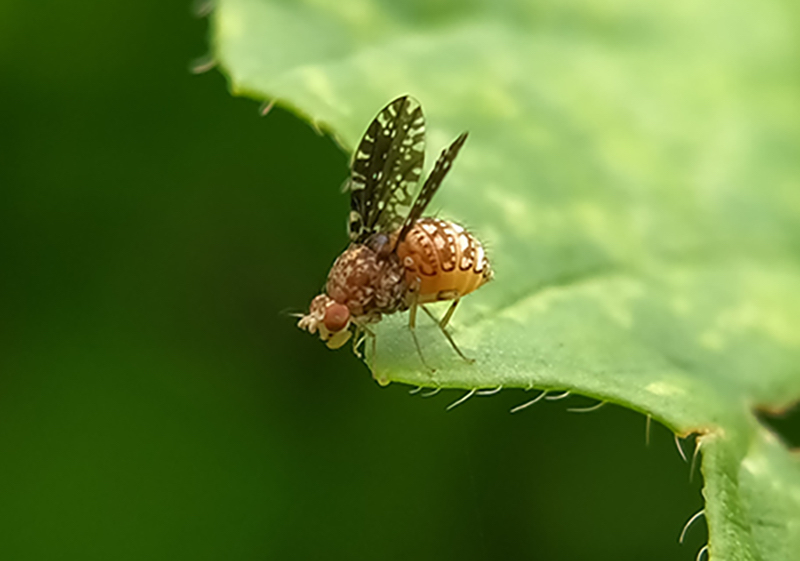 With ripening grapes potentially at greater risk from Spotted Wing Drosophila (SWD) attack over coming weeks, Hutchinsons’ Rob Saunders and Chris Cooper answer some key questions about this relatively new pest and how to control it

When and where does SWD appear?

First detected in Kent during 2012, SWD has since spread to many UK grape-growing areas, and is present throughout the year, although numbers generally peak in late summer.

SWD are weak flyers, but are readily wind-dispersed and have a broad host range which includes soft fruit such as cherries or raspberries.

Local hotspots can develop, often in areas where there is woodland or other dense vegetation for them to overwinter in, and other nearby host crops.

This season, WineGB has deployed camera traps in vineyard sites spread across the country to undertake SWD monitoring using technology developed by Landseer, to make monitoring this pest more straightforward than using the conventional wet traps.

When are crops at greatest risk?

Adult flies are attracted to ripe and under-ripe fruit to lay their eggs in, so pose a threat before and during harvest. As soon as stomata on developing grapes close and colour change begins (veraison) there is a risk of attack, which can predispose crops to botrytis and sour rot. Veraison usually occurs from August onwards, depending on the season.

Warm, humid conditions appear to favour SWD, so risk may be increased by poor canopy management resulting in a thick leaf wall and poor air movement. High-intensity UV light appears to deter SWD but can cause sun scorch.

Are all varieties at risk?

Red skinned cultivars appear more at risk of attack from veraison onwards. White grapes are generally less attractive to the pest, but can still be affected once sugar levels are high enough.

The risk to all crops is increased if picking is delayed.

When should SWD be treated?

Early treatment before damage occurs is essential, unless the crop can be immediately picked when first attacked.

Treatments should be made from veraison onwards depending on monitoring trap catches. There are currently no set treatment thresholds, although WineGB is investigating this.

SWD reproduces quickly (14 days adult-to-adult), with females producing up to 200 eggs, so numbers can build fast. In other crops, trap catches have been recorded as increasing from 10-20 to 800+ in a few days, hence the need to act swiftly.

Where attacks have occurred previously, growers should spray the threatened area as soon as SWD numbers start rising.

What are the chemical options?

All treatments are for adult control only, with the main options being Tracer (spinosad), and Hallmark (lambda-cyhalothrin). Emergency authorisation for Exirel (cyantraniliprole) has also been approved, as in 2019.

Including the adjuvant Combi-Protec in the control programme could improve control, as the product claims to attract, and increase feeding activity of adult flies. This will increase the efficacy of any insecticide applied just before or just after the Combi-Protec application. Care is needed to obtain best results though.

What about non-chemical options?

The UK has no beneficial insects that predate on SWD, but there are other non-chemical measures that can help reduce the risks, including: