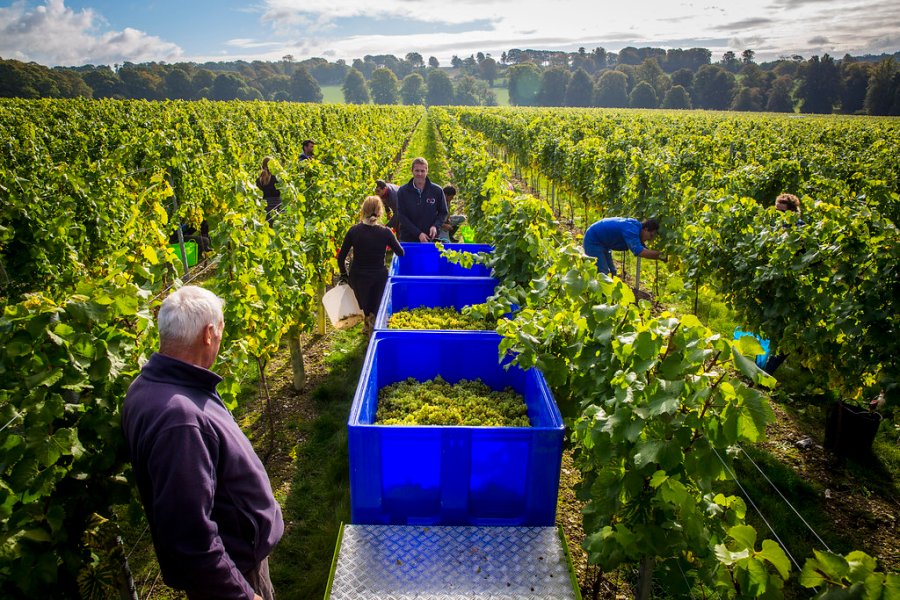 Simpsons’ Wine Estate is located in one of the sunniest corners of the British Isles, just a short drive south of Canterbury in the nation’s south-east corner. The vineyard began in 2014 with its first 10 hectares of Chardonnay, Pinot Meunier and Point Noir. A couple of years later, a further 20 hectares were planted with all 30 hectares coming into full production by 2019.

The results of the past seven years are nothing short of impressive. With up to 250,000 bottles of still and sparkling wine being produced each year, the business is growing both domestically and abroad. The wines are selling particularly well in both Sweden and Norway, often exceeding the available supply. We asked Estate Manager, Darryl Kemp, what this success means?

“My role is to manage the production so we can meet the growing demand for the wine; it’s exciting but it also means we’ve had to focus on adopting best practices. As a smaller operation, we had all the data in hand-written diaries and while I’d tried many different apps to help, I just never settled on a system to keep organized.”

In August 2020, Darryl uncovered a relatively new tool, Farmable, in his search for a solution that would simplify the team’s documentation and decided to give it a proper trial at Simpsons’.

“What struck me first was that it was designed for fruit growers”, recalls Darryl. “We have a lot of information to visualise in a vineyard, it’s more than your average arable farm.”

Farmable is a technology platform, developed in collaboration with Norway’s largest fruit farm. Development began in 2018 with a vision to simplify data management exclusively for orchards and vineyards while acting as an entry point to agtech adoption for fruit producers globally.  The user-friendly app can be downloaded on iOS and Android devices and Farmable offers a freemium model that provides more than most growers are accustomed to receiving before swiping their credit card.

“With other systems I’ve tried, I’ve been reluctant to spend the time adding data in fear of needing to pay money just to find out essential information. I don’t have the same hesitation with Farmable, I get valuable feedback from the tool. For example, when we record tasks, we get quick recalls on the job status so we can plan accordingly. It’s motivating to see that our time is being used in the best way possible,” said Darryl.

Farmable, a lean and light farm management tool, is relatively early in its product development. The freemium tool can be used for managing crop treatments, capturing field observations including scouting work, and collaborating across the farming team.  There are still features which need to be developed and the team has dedicated full-time engagement managers to work with growers in Spain, Germany, Australia, South Africa and the UK to ensure that future modules meet the needs of the global viticulture and horticulture market. Upcoming additions to the Farmable tool will include auto-populated spray reports, through the Jobs Export module, at a cost of £49/year/farm and a labour management module (pricing to be released later this year). The team is committed to keeping its existing freemium offering which allows its users to opt-in to more advanced, paid features if and when they are interested.

While price is often cited as a barrier to the success of technology on the farm, usability is also an important consideration. The Farmable team understands the real-world challenges of using technology on the farm because farming is part of their daily life; simplicity is prioritised in every feature they design.

“Intuitive and easy to use is high on my list of requirements for any tool”, explains Darryl.

“We’ve been able to easily onboard other members of our team into Farmable and it’s only making everyone’s day better to have real-time access to data. It’s even been helpful for our team members leading tours of the vineyards, with two clicks they can double check the withholding period on a field and know if it’s safe to proceed,” he continued

In the UK, more than 250 fruit farms have joined the Farmable platform since it first launched in 2019. The product continues to grow in response to the feedback provided by growers. The most recent example of this is a feature for multi-location jobs, an idea initiated through collaboration with British growers. Beyond the upcoming features, Farmable is laying the groundwork for integrated data with connected weather stations and sensors with the goal of offering all the farm’s data in one, user-friendly platform. With dedicated users, like the ones at Simpsons’ Wine Estate, the team hopes to be the platform of choice for vineyard management for years to come.